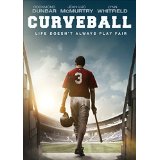 From the opening credits I knew this was movie intended to be a hard-hitting examination on how drugs could compromise a promising future. In most respects Curveball hits the mark; even the inclusion of the unorthodox methods which the lead character’s mother utilizes in order to help him is a welcome addition. However, there is a disconnect between the film’s introduction and conclusion that does some pretty considerable damage to the story overall.

Nolan is a pitcher with a promising future ahead of him. He and his best friend Sam are closer than brothers. Since childhood, when Sam protected Nolan from a beating from a group of boys, Nolan has felt extreme loyalty to his friend, covering for him anytime he makes a mistake. Sam, unlike Nolan, is a foster child in an at least verbally abusive home. To escape his situation, he turns to drugs and eventually pulls Nolan into that world as well. It starts off recreationally and rapidly becomes all-consuming

As these circumstances usually do, tragedy strikes, and Nolan becomes more and more engrossed in the substance, and despite the insistence of his mother, girlfriend, or his other friends, Nolan refuses to get help. Unable to watch her son throw away his wife, Nolan’s mother resorts to some unorthodox practices to force her son to get the help he desperately needs. But is it too late to save the once-promising pitcher?

Again this is a hard-hitting examination of how substance abuse can cripple a promising future. No punches are pulled from the very beginning, which I believe to be the film’s strength. There is a gritty texture to the way the story unfolds that made the whole thing real for me. Although the circumstances of the tragedy made me question why the lead character would repeat the same mistakes that lead to those circumstances, I also know that it does happen. As they say, “Those who do not learn from the past are doomed to repeat it.” That appears to be Nolan in this film. I give tremendous credit to actor on this front; without his authenticity, watching his character’s descent would have been a hard pill to swallow. The other person worth mention was the mother. We all know that a mother’s love is universal, and that they will go to any lengths to protect their child, even if it’s from themselves, and that was the biggest surprise for me. I wasn’t expecting the mother to resort to tactics that can only be described as extreme. Her inner turmoil to stay the course even though her actions are causing her emotional strife drives the storyline to its climax.

The storyline stays on point for the most part; however, I think too much time was spent on establishing the relationship between Nolan and Sam. I understand the purpose of the scenes, which was to show how close the two were and to give the audience a better understanding of why Nolan was so affected by the loss, but they could have been trimmed and redistributed on the tail end of the film to fix the disconnect on the ending. Not to give too much away, but I was very disappointed with the way the story ended, because it in no way matches the opening sequence, which I thought was a fast-forward sequence. The conclusion is possibly the most important aspect of any story. It is how the watcher receives their resolution, and not to steal from the title, but this film’s conclusion was a curveball.

Despite the conclusion, Curveball remains a story worth telling and is likely to resonate with people experiencing similar circumstances. Do not utilize the methods used in the film, but hopefully, it gives those affected by the situation hope that they too will make it through.

Jeremy Butler is a film school graduate of the International Academy of Design and Technology. He is been writing for Upcomingdiscs since 2012; however, movies have played a big part of his life for much longer. Favorite genres include horror, science fiction/fantasy, and comedy. Favorite movies are V for Vendetta, Boondocks Saints, Kiss Kiss Bang Bang, and The Godfather.
Exclusive Interview With Adam Shell, writer/director of Pursuing Happiness Stealing Cars