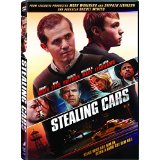 It comes as no surprise that even in 2016 we continue to have issues with how we handle and discipline criminals while they are incarcerated.  We have a system that pulls in troubled youths that seem to come and go through the judicial system and seem to spend a majority of their lives behind bars.  Hollywood has seemed have an eye on this problem and has churned out many films about misunderstood inmates that are incarcerated and are unfairly treated by the system and those who are in control of the inmates.  Cool Hand Luke, Sleepers, and The Shawshank Redemption are a couple films that jump out at me, and today it’s Stealing Cars that dares to explore this problem.

Billy (Emory Cohen) is basically your rebellious teenager who we meet in the opening scene as he is stealing a car and having a little joyride before the police finally catch up to him.  As anyone can expect, when Billy arrives to the detention center he receives a less than warm welcome from one of the guards, Conrad (Paul Sparks) who seems to have it in for Billy from day one.  To be fair though, Billy is far from being the model inmate and wastes no time making an obnoxious spectacle of himself during his first days in custody.

Cohen is the highlight of the film; he delivers a well rounded performance.  While Billy seems to enjoy putting those in charge of running the facility through bout after bout of rebellious chaos, Billy is also attempting to be a peace builder amongst all the inmates.  His rebelliousness even goes so far as him escaping the facility to just enjoy being caught and brought back once again.  While he feels he doesn’t belong in custody, he struggles to understand where he belongs in his life.

The juvenile center is run by Montgomery De La Cruz (John Leguizamo), who manages to run the center with a firm but compassionate hand.  What Leguizamo brings to the film is a passionate and genuine performance, but the character just seemed to be riding the fence as someone we could never trust.  It’s not that this weariness is a problem, but as a viewer I kept watching expecting more would eventually come from this character.   As He tries to build a relationship with Billy, it’s simply an act that seems more contrived than anything, and it’s as this relationship and many others in the film develop that the film loses me.

What I had the hardest time watching in this film is the blossoming relationship between Billy and Nurse Simms (Heather Lind).  First off, Billy is supposed to be a teenager, so the relationship with the nurse already would be considered inappropriate, not to mention he’s an inmate and she’s a former addict.  This relationship simply feels forced; it reaches levels one can only describe as absurd.  For instance, the inmates build an outdoor theater and they all get together to watch a movie. During the movie, Billy sneaks to a back row to talk to the nurse and even tries to hold her hand, all while under the watchful eye of the guards.  Mind you, these are guards who hate Billy and take pleasure with punishing him and his friends.

But the absurdness doesn’t stop there.  Remember a couple paragraphs before where I mention how Billy enjoys escaping from the facility?  During one of his little night adventures he has a run-in with the Sheriff (Mike Epps).  While Epps does play a likeable character, are we really supposed to believe he’s going to shrug off the fact Billy escaped and decide to have dinner and a talk with him and proceed to help sneak him back into the facility?

By the time we come to understand the tragedy that has pushed Billy over the edge, which is supposed to explain his behavior, it’s far too late into the film for this to make any difference. William H. Macy and Felicity Huffman pop up throughout the film as Billy’s parents; it’s a shame we don’t get more of this interaction, but it’s still nice to see them onscreen.

Despite my issues with the film, Stealing Cars is still a worthwhile viewing that is a reminder that despite how far we’ve come with creating state-of-the-art prisons, there is still much to be done about how we care for those behind bars.  While this is a far cry from Cool Hand Luke, it’s worth giving a chance for the performances alone.

Brent Lorentson is a horror writer and film critic based out of Tampa, Florida. With a BA in Digital Film, he co-wrote and co-directed Scavenger Hunt. His short stories have appeared in various horror anthologies. In 2019 his short script Fertile Blood will be a part of the anthology horror film Slumber Party. He is currently working on his first novel A Dark and Secret Place set to be released in late 2019. Favorite Films: Taxi Driver, Fight Club, I Saw the Devil, The Wild Bunch, Dawn of the Dead, A Clockwork Orange, Pulp Fiction, Heathers, The Monster Squad, and High Fidelity.
Curveball Midnight Special