The Untouchables: The Complete Series 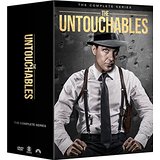 I was entirely too young to remember even the syndicated run that my mother was watching in the late 1960’s. Under more normal circumstances that would not matter as I could introduce myself to this world with the DVD release. That was before 1987 and the release of Brian De Palma’s classic film. Honestly, I simply can’t watch these episodes without thinking of that movie. For an entire generation that film has defined these characters and that time. It’s unfortunate, really, because this 1960 series had a lot going for it, particularly when you look at what else was on television at that time. Never before had such brutal violence in such a starkly real world graced the black and white sets of America. When I read articles about the controversy surrounding these depictions, I am forced to smile a little. By today’s standards these shows are quite tame. Still, the flurry of protests the show spawned were quite real. Italians were also vocal in their belief that the show went too far in portraying nearly every bad guy as being of Italian descent. I have to admit some of these accents make Father Sarducci sound good. Complaints went as far as the US Attorney General. My, have things changed. I am also of Italian heritage and gladly sit down to an hour of Tony Soprano, eating it up about as fast as a bowl of tortellini and gravy. While there are still those of us who feel racially exploited, most of us embrace the mob mythology of The Godfather and Goodfellas. We can accept the difference between reality and fantasy. And so I watch these episodes as if I were some remote viewer, not only from a different time, but a different place.

The Untouchables took on a perhaps too convincing appearance of reality. Remember that the audience was made up of folks who grew up getting their news from newsreels at the local theater. It was a stroke of genius to have real life news reporter Walter Winchell narrate the series. Everything from that narration to the gritty dark photography carried a documentary style feel to every minute of the action. You can only imagine why too many Americans thought it was too violent. The show wasn’t too violent. It looked and felt too realistic. Robert Stack literally becomes the persona of Elliot Ness. The show was also based on a book that was co-written by Ness himself but was highly fictionalized by the time it reached millions of homes each week. In truth Ness’s team didn’t exist long after bringing down Capone for tax evasion. In the series the team becomes a strike force of sorts against an entire mug book of criminals real and imagined.

Frank Nitti (Gordon) was the main bad guy for the team, but there were many gangsters featured both in and out of the Capone regime. The shows did not follow a linear chronology. One week it’s 1932. Next week it’s 1934. Then it’s back to 1931. The series didn’t stay on the bootleg business either. There were episodes like The White Slavers which took place after Prohibition and dealt with prostitution. Gambling was a huge industry in this world, as was simple murder for hire, mostly potential witnesses. Each week Ness and his team of Untouchables, named so because they could not be bribed, would take on an aspect of Chicago’s underworld, usually staying only one step ahead of the gangsters. There’s plenty of machine gun fire and even car chases in vintage automobiles. And every moment of it was performed with careful attention to detail.

The dialog sounds like it came out of a dime detective novel, but it was likely how most people expected them to sound, so it wouldn’t have taken them out of the experience at all. Today it all looks incredibly dated. But it’s still worth a look.

The original releases were in half seasons. These sets were rather small bites, and now CBS has put together the big one. This massive collection includes all 119 episodes on 31 discs. The only extra is a Lucy episode where she meets Robert Stack’s Ness. Both shows were produced at Desilu.

The chronicles of Ness and his band of Untouchables is more legend than fact, and these episodes do little to correct the myth. Still, it’s nice to see some original cops and robbers action even if a little dated and clichéd. The gangster and the cop have come a long way since then, and the boundaries of good guys and bad guys has blurred somewhat over the years. Not here. It’s Ness and his boys against the worst of “hate, fear sin and corruption”.

Gino Sassani is a member of the Southeastern Film Critic's Association (SEFCA). He is a film and television critic based in Tampa, Florida. He's also the Senior Editor here at Upcomingdiscs. Gino started reviewing films in the early 1990's as a segment of his local television show Focus. He's an award-winning recording artist for Omega Records. Gino is currently working on his 8th album Merchants & Mercenaries. Gino took over Upcomingdiscs Dec 1, 2008. He works out of a home theater he calls The Reel World. Favorite films: The Godfather, The Godfather Part II, The Body Snatcher (Val Lewton film with Karloff and Lugosi, not the pod people film), Unforgiven, Gladiator, The Lion King, Jaws, Son Of Frankenstein, The Good, The Bad And The Ugly, and Monsters, Inc.
Remember (Bluray) Crossing Point