Posted in: Disc Reviews by Brent Lorentson on May 10th, 2016 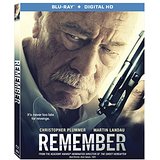 With every day that passes we lose those who survived the horrors of World War 2, and eventually there will no longer be those with memories to share from the past, and all that will be left are the films and newspapers from another era.  As these survivors grow older, their memories fade, and all that is left are fragments pieced together from what they can remember.  In the new film Remember from Atom Egoyan, he delivers an intimate tale about a man suffering from dementia who is seeking revenge for atrocities committed in the past.  Considering Egoyan’s last film left me a little underwhelmed I went into this film with caution, and the result is that I think this may be Egoyan’s best work.

Zev (Christopher Plummer) is spending his twilight years in a rest home suffering from dementia.  Just about every day Zev gets to wake up only to discover his wife has been deceased for some time and that things simply are not as he remembers them.  With his wife gone it is time for Zev to set out and follow through on a promise he made that he could only go through with following the death of his wife.  He made a pact to kill a surviving Nazi guard who is living in the States under a different name.  Zev just so happens to be the only man who can recognize and identify the guard; the trouble is the guard is hiding under an alias that four people across the US have.  Max (Martin Landau) has gathered all the information Zev will need for his journey; if not for being bound to a wheelchair, he would march right alongside of Zev to follow through this vigilante quest.

No time is wasted with getting this story moving, and though we only get to see Zev and Max together at the start of the film, the scenes of them together are enough to show the relationship between these two men.  What makes this work so well, though, is how amazing these men are as actors.  Right from the start we see so much put on display through their eyes and simple body movements.  These are actors who have been around long enough to show how to give a commanding performance and make it look effortless.

Zev is guided by Max through letters that he reads every day to remind him of his quest, and with each reading we see Zev’s heartbreak, yet also see his resolve in the importance of his mission.  As we see him visit one man after the other, we see how every man’s experience in life can change the man that they become over the years, and the question starts to emerge about whether if enough time has passed a man can forget the horrors and atrocities he’s committed and be forgiven for them, or should he be punished with the little time he has left?

For each stop Zev makes we get a glimpse into the dark secrets the past can hold for someone.  What makes each visit so profound is that we don’t see a gradual intensity building; instead each visit hammers home something profound about the time of WW2 and the Nazis and how the Nazis made an impact on each individual.  There is an incident where Zev encounters the son of (possibly) the man he is looking for, played by Dean Norris (Breaking Bad).  This sequence leaves its mark simply because it shows us how perspective on history can impact following generations.  It’s this altercation that shows how hate can be passed down to those we love and how jaded we can become simply through the love we share for our family.

As the tension rises with the film, the filmmakers hold out a nice surprise that simply makes this film more than a simple revenge film, but a powerful journey about coming to terms with the past.

There is so much to like about this film.  This is a beautifully directed film, with a script that is rich with great dialog and well-developed characters that we don’t get enough of.  But what takes this film over the top are the performances from the cast that show they still have so much to offer cinema; all they need are the right projects to fall into their laps.  This isn’t a good film; this is a great film that deserves to be seen and remembered.

Remember is presented in an aspect ratio of 1.78:1. The 1080p image is arrived at with an AVC MPEG-4 codec at an average of 32 mbps.  The film is beautifully shot with a very natural look filled with rich colors as well as plenty of detail that is captured not only in the clothing and sets but most importantly in the faces of all the characters involved.  In a film with so many veteran actors in their golden years, every wrinkle and age spot is captured to help reflect the rich history that these men have lived.  The contrast we can see from the drab confines of the retirement home to the final stop Zev makes in his crusade for revenge, it’s odd that as the story reaches its darkest point that the character would be surrounded by so much color.  There are no compression issues to be seen; at first glance this may appear a simply-shot piece, but the closer you look the more you can see how the imagery plays a part in the film.

The DTS-HD Master Audio 5.1 track is a dialog-heavy one.  Despite some of the varying pitches in voice and accents, everyone is very clear.  For the scenes where other languages are spoken, it comes with easy-to-read subtitles.  While this isn’t a film that attempts to utilize the surround structure, sometimes less is more.

Commentary w/ Director Atom Egoyan, Writer Benjamin August, and Producer Robert Lantos: For those that enjoy commentaries, this is one that is filled with not just information about the making of the film but a lot of the historical significance that factors into the story.  There is a lot of information here and has very few dull moments.

Performances to Remember: (16:49) This is somewhat a behind-the-scenes segment mixed in with interviews with the cast and crew. A good portion of this feature is spent discussing the many veteran actors who are in the film.

A Tapestry of Evil: Remembering the Past: (13:47)  Here we get a brief overview of the historical influences on the film.

Had I seen this when it was released in 2015, this would have been in my top five films of last year; I really love this film and the performances throughout.  Remember shows us how you can make a film thrilling without a lot of flash or violence.  With a runtime of just over 90 minutes, this is a title everyone has time to check out, and I can just about promise you this is something you’ll come away from enjoying more than most films you’ll see in the Cineplex.  We need more films like this, more films with actors who can act and deliver performances rather than just being pretty faces on screen.

Brent Lorentson is a horror writer and film critic based out of Tampa, Florida. With a BA in Digital Film, he co-wrote and co-directed Scavenger Hunt. His short stories have appeared in various horror anthologies. In 2019 his short script Fertile Blood will be a part of the anthology horror film Slumber Party. He is currently working on his first novel A Dark and Secret Place set to be released in late 2019. Favorite Films: Taxi Driver, Fight Club, I Saw the Devil, The Wild Bunch, Dawn of the Dead, A Clockwork Orange, Pulp Fiction, Heathers, The Monster Squad, and High Fidelity.
Tuesday Round Up: May 10, 2016 The Untouchables: The Complete Series