Have Gun Will Travel: The Complete Series 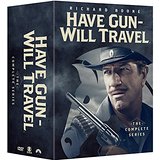 Those words ended every episode of Have Gun Will Travel, sung by Johnny Western in a time that such words could be sung without irony. Outside of Richard Boone’s black-clad, craggy, Rhett-Butler-gone-to-seed gunfighter, that song was all I could really recall about this venerable Western from television’s golden age. Would it, like so many revisited shows from my youth, ultimately disappoint? Or would it hold up fifty years after it was originally broadcast, viewed as it would be by the far more jaded, cynical man I’ve grown into?

Now, just to set the record straight, I wasn’t even born until Have Gun Will Travel had been off the air for at least a year. However, during my teen years, it was a staple of a late-night revue show on one of my local television stations. I spent many a night staying up until three in the morning watching it, along with other classics like The Twilight Zone, The Honeymooners, and The Fugitive. Shows with that kind of personal history are inevitably remembered in a bubble of nostalgia that can be quickly popped when viewing them so many years after they were relevant and edgy. Last year I started re-watching The Twilight Zone and was pleasantly surprised how well it plays now. Some aspects (and some episodes) are still clunky, as if Rod Serling wrote the dialog, you knew that some of it would be laughably stilted, but the stories are still awesome, the direction is tight, and the acting, while often stylized, is generally quite good.

The show ran for six seasons with nearly 40 episodes most years. If you’re counting, that adds up to 225 episodes in this set. You’ll find it all spread out over 35 discs with a few bonus features sprinkled about. Most of it is text-based and includes Production Notes and Cast Biographies. It’s nearly 100 hours of material here, well worth the price of admission. This was another CBS show that was released in half seasons over the years. This is the collection you might have been waiting for. Here it is.

Parts this review were written by William O’Donnell

Gino Sassani is a member of the Southeastern Film Critic's Association (SEFCA). He is a film and television critic based in Tampa, Florida. He's also the Senior Editor here at Upcomingdiscs. Gino started reviewing films in the early 1990's as a segment of his local television show Focus. He's an award-winning recording artist for Omega Records. Gino is currently working on his 8th album Merchants & Mercenaries. Gino took over Upcomingdiscs Dec 1, 2008. He works out of a home theater he calls The Reel World. Favorite films: The Godfather, The Godfather Part II, The Body Snatcher (Val Lewton film with Karloff and Lugosi, not the pod people film), Unforgiven, Gladiator, The Lion King, Jaws, Son Of Frankenstein, The Good, The Bad And The Ugly, and Monsters, Inc.
Misconduct (Blu-ray) Money Monster