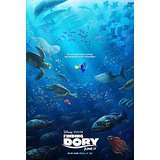 Ever since Sheriff Woody and Buzz Lightyear rocketed onto the big screen in 1995’s Toy Story, Pixar has assembled a wonderful stable of unforgettable characters. Ironically, one of the animation studio’s most memorable creations is a blue tang fish who probably wouldn’t remember you. Besides being a dazzling and heartwarming family classic, Finding Nemo was also one of Pixar’s biggest hits. (Technically, it’s actually the biggest.) So while it’s a little surprising that it took 13(!) years for a sequel to swim into our lives, the fast and funny Finding Dory proves to be a completely worthy follow up.

Of course, anyone who’s seen Finding Nemo needs no introduction to Dory (voiced by Ellen DeGeneres), the forgetful fish who helped anxiety-ridden clownfish Marlin (Albert Brooks) move heaven and ocean to reunite with his son. Yet the sequel cleverly opens with a scene featuring Dory’s parents (Diane Keaton and Eugene Levy) teaching their young daughter how to introduce herself and how to cope with her condition. It’s no spoiler to say that Dory eventually becomes separated from her parents, and it doesn’t take long for Finding Dory to connect with the moment in the previous film where Dory meets Marlin.

“How can you remember you have a family if you have short-term memory loss?”

We catch up with Dory, Marlin and Nemo (Hayden Rolence) one year after the events of the first film. Dory accompanies Nemo on a school field trip, which triggers a distant memory of her parents. With only that faint memory to go on, Dory convinces Marlin and Nemo to help her look for her parents. The search takes them to the Marine Life Institute, a dizzying aquarium in California. After getting separated from Marlin and Nemo, Dory teams up with a cranky octopus septopus named Hank (Ed O’Neill) who has his own agenda. Along the way, Dory proceeds to remember more about her past. But as she comes closer to reuniting with her long-lost family, she also risks losing the life she’s created with Marlin and Nemo.

Despite the popularity of the first film — and DeGeneres’ standout work in it — I can understand why it took a relatively long time for a sequel to click into place. A simple rehash of the first movie’s plot line (Marlin and Nemo getting separated) would’ve felt uninspired. (What is this, the Taken franchise?) On top of that, simply giving a popular, potentially one-note character the spotlight in a sequel doesn’t always work either. The fact is Dory can be an annoying character — just ask Hank, who mostly snatches the irritable torch from Marlin as Dory’s primary companion — so placing her center stage wasn’t exactly a no-brainer.

Fortunately, the sequel brings back Nemo co-director/co-writer Andrew Stanton, who has crafted a jaunty, emotionally satisfying journey for Dory. The movie is also smart to highlight the upside of Dory’s “handicap”; her short-term memory loss causes her to be daring and not overthink things.

That being said, Finding Dory doesn’t reach the imaginative heights of its predecessor. Although there are fun callbacks to the original film — we learn why Dory “speaks whale”; and even though this isn’t a Marvel movie, make sure you stay after the opening credits — there isn’t anything here that touches the hilarious lunacy of the shark support group from Nemo. And while the new movie gets some comedic mileage out of the near misses between Dory and Marlin/Nemo, Finding Dory can’t help but feel somewhat smaller since most of the action is confined to the marine park.

The good news is Finding Dory applies Pixar’s trademark inventiveness to many of its new characters. For example, Hank’s ability to blend into the background will surely get kids excited to learn about the mimic octopus. And a beluga whale’s (Ty Burrell) real-life ability to see and hear in and out of the water is a big part of the movie’s climax. As with most Pixar productions, there are also gags that are meant to sail right over young viewers’ heads, like the fact that a pair of comically territorial sea lions are voiced by The Wire stars Idris Elba and Dominic West. Also, Sigourney Weaver somehow figures into the plot?! DeGeneres, whose popular talk show actually debuted a few months after Nemo hit theaters back in 2003, has her affable chatterbox routine down pat by now. And even though he has a smaller role this time around, Brooks still gets a big chunk of the laughs as worrywart Marlin.

The feature film is preceded by an appropriately beach-y Pixar short called Piper, starring a very hungry and enterprising baby sandpiper. (The photo-realistic background work in this short is breathtaking) In a year that has already given us several disastrous and under-performing follow-ups, Finding Dory is somewhat of a rare fish: a sequel people actually wanted to see that also delivers the goods. The movie may not totally recapture the magic of the first film, but “you know…I think I’m gonna remember you.”