Posted in: Disc Reviews by Gino Sassani on December 11th, 2012 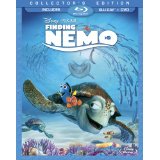 “When you said you wanted an ocean view, you didn’t think you’d get the whole ocean, did you?”

When Finding Nemo was released in May of 2003 there were a ton of skeptics. It was certainly a divergence from the tried and true Pixar formula, and even the people involved with the project were concerned that it would become Pixar’s first flop. They needn’t have worried. The film was far from a flop. It took in over $70 million in just its first weekend. The final total would be just shy of a billion dollars. The animated feature took the Oscar for best animated feature that year. But that would be just one of 35 awards the film would go on to win. Still, the true success of a film can not always be found in the box office take. Truly classic films are timeless. It’s been one of Walt Disney’s defining characteristics over the decades. It might be too early to tell if Finding Nemo will fit that timeless classic mold, but it has already left a pretty strong impact on our pop culture.

Finding Nemo did for clown fish what Jaws did for great white sharks. There isn’t a kid alive who doesn’t know what a clown fish looks like and that it lives in anemones. Disney is also quite good at marketing those kinds of advantages, and stuffed Nemo toys are still pretty popular a decade later. Both Disney World and Disneyland have rides with a Nemo theme. It was a technical milestone, and it brought in the cash to justify the R&D that went into the movie.

Marlin (Brooks) and Coral (Perkins) are a couple of very happy clown fish. They’ve just moved into a new spacious home together, and they have about 400 eggs ready to make them parents many times over. It’s a wonderful life until a barracuda strays into their neighborhood and tragedy strikes. Before long Coral and their babies are gone. All except one remaining egg, which he names Nemo (Gould).

Jump ahead to Nemo’s first day of school. After the tragic events of the beginning of the film, Marlin is understandably a very protective parent, and he’s quite nervous about Nemo leaving the safety of the anemone and going off to school. Nemo thinks he’s overprotective, and he probably is. But just because you’re paranoid doesn’t mean they’re not really out to get you. Nemo gets scooped up by a diver and taken away.

Marlin sets out to find his missing son. A dropped scuba mask gives him the only clue to where they might have taken him. Along the way he meets up with Dory (DeGeneres) a blue tang with short-term memory issues. They also encounter a shark named Bruce (Humphries) who has sworn off eating fish, Crush (Stanton) a surfer-dude sea turtle, and an array of carnivorous fish, birds, and jellyfish.

Meanwhile Nemo is being held in a fish tank at a dentist’s office. There he makes a few friends that include a starfish named Peach (Janney) and a mysterious survivor from the open water, Gill (Dafoe). They try to help Nemo escape before the dentist’s killer niece comes to take him away.

The film is actually a pretty wild adventure. It is also more educational than most of these animated features. Marlin encounters all sorts of other sea life and enters different ecco-systems along the way. Albert Brooks is just about perfect as the worrying father Marlin. Ellen DeGeneres is the film’s only real fatal flaw. She’s about as annoying as a character can get. The voice work is also completely over the top. Of course, this annoying state of affairs is just business as usual for the untalented performer. Fortunately, the film is populated with all sorts of wonderful characters and voice actors. Willem Dafoe is underused as the tank leader who tries to impart some street wisdom on Nemo. The director himself took on the part of Crush, and it remains one of the highlights of the film and easily remains some of the most repeated dialog from the kids who have seen the film 376 times. Other notable voices in the film include Brag Garrett with his trademark deep bass voice, Eric Bana, and Pixar’s lucky charm, John Ratzenberger.

The story and characters are enough to entertain the kids, but as usual Pixar strives for much more than that. The film was a technological breakthrough in computer-animated features. The animation team had to completely redesign the pipeline and other tools that they use for these kinds of productions. With the action taking place underwater, there were a million new obstacles to defeat along the way. The result is one of the most stunning computer-animated features ever made. A full decade later the film impresses just as it did when it first showed up on our local cineplex screens. The water environment here is ultra-realistic. You can see various amounts of debris, and you also experience different aspects of the image depending on how far you are from the object. The animators did an awesome job of depicting the effects of not only the water environment but the different amounts of water to depict distance. The film is now being re-released in a converted 3D format, but I’m not sure you could do much better than the animators already did here. You also get a good sense of the objects being manipulated by the generated water. Fins and background plants and coral are constantly reacting to the water movement about them. The attention to detail might be lost on the children, but it makes the film just as interesting to the adults. That’s the sign of a timeless classic.

Finding Nemo is presented in its original aspect ratio of 1.78:1. The 1080p image is arrived at with an AVC MPEG-4 codec at an average 35 mbps. This is as near perfect and flawless as a Blu-ray can get. Colors are absolutely bright when they need to be. The bright contrast of white and orange on the fish is remarkably realistic. When the fish are at the surface you get a wonderfully textured slick look of the wet scales. At just the right angles you can see the individual scales of these fish. This was something I never noticed when I saw the film in the theaters. The animation is seamless. Black levels are rock-solid, and the amount of shadow definition here is a huge compliment to the careful work done by the animation team. I find it hard to believe that the image could have been any better.

The Dolby Digital TrueHD 7.1 audio track is dynamic. There’s not a lot of sub response here, but the film doesn’t really tend toward that kind of a sound field. Here the magic is in the crystal clarity. There is also a lot to be said for the subtle but immersive use of surrounds. The track does an exceptional job of putting you in the environment with the characters. While not so perfect as the video, this is a very effective audio presentation.

There are two Blu-ray discs here. The first contains the film and some new features that were not included in the earlier DVD release: All in HD

Finding Nemo – A Filmmakers Roundtable: (17:37) Andrew Stanton and a handful of other crew members sit and share their memories of making the film. They are quite candid about any missteps along the way and their own fears that the film might not work.

Reinventing The Submarine Voyage: (15:05) This feature looks at the conversion of an older Disneyland ride into a new Nemo experience.

A Lesson In Flashbacks: (8:00) The film originally contained a complex series of flashbacks that told Marlin and Coral’s story. Here Stanton shows us that original idea through the use of animated storyboards.

Disc 2 ports over the DVD features that include:

Making Nemo: This 25-minute featurette is very interesting, and covers the story basics, creating the look and feel of the film, the animation process, and more. This featurette is definitely worth a watch.

Virtual Aquarium: This acts as an aquarium screensaver on your TV.

Behind the Scenes: This section contains a Studio Tour of Pixar, 3 minutes of Character Interviews (with the fishes); and Publicity such as teasers and trailers.

Exploring the Reef: This 7-minute featurette, hosted by Jean-Michel Cousteau, is like a science lesson for kids about the underwater world. The film’s fish characters occasionally jump in to share some insight, and this “interruption” is the only enjoyable aspect of this featurette.

Pixar has been amazing us for almost 20 years now. It’s a bit of a surprise that Finding Nemo has taken this long to get a high-definition release, but it’s finally here. Of course, it coincides with the new 3D version in theaters, and there is also a 3DBD available, but we were not given that version to review. Still, I’m not sure you’ll be missing anything at all with this version. It’s a very magical film with plenty for viewers of all ages. “It does things to ya.”

Gino Sassani is a member of the Southeastern Film Critic's Association (SEFCA). He is a film and television critic based in Tampa, Florida. He's also the Senior Editor here at Upcomingdiscs. Gino started reviewing films in the early 1990's as a segment of his local television show Focus. He's an award-winning recording artist for Omega Records. Gino is currently working on his 8th album Merchants & Mercenaries. Gino took over Upcomingdiscs Dec 1, 2008. He works out of a home theater he calls The Reel World. Favorite films: The Godfather, The Godfather Part II, The Body Snatcher (Val Lewton film with Karloff and Lugosi, not the pod people film), Unforgiven, Gladiator, The Lion King, Jaws, Son Of Frankenstein, The Good, The Bad And The Ugly, and Monsters, Inc.
Simpsons: Season 15 Backstage at Budz House