Posted in: The Reel World by Brent Lorentson on July 2nd, 2017 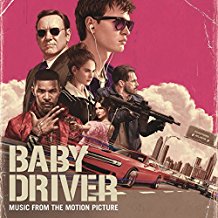 For the most part it seems the summer blockbusters tend to be sequels, superhero films, or CGI bonanzas that are simply eye candy to get us to films in the dark auditoriums to escape the heat. It’s rare that something comes along that is so clever and as fresh as Baby Driver.  Personally I’ve been a fan of Edgar Wright from the moment I first saw Shaun of the Dead, he was a writer and director that I felt knew how to make films fun. When he was set to direct his dream project Ant-Man, I was excited to see him finally get a chance to do a giant tent-pole studio film, but weeks before filming was set to begin he got pulled away and replaced. When it got announced he was working on an action-comedy named Baby Driver well I was excited but the film’s title had me scared, fears of him doing something along the lines of Baby’s Day Out ran through my mind, but then as the cast started to assemble I couldn’t help but get excited. Kevin Spacey, Jamie Foxx, Jon Hamm, Jon Bernthal and these were simply the co-stars.  Then when the first trailer dropped this became the title of the year for me to keep an eye on. While this might not be the kind of film that gets nominated for best picture, for me this had potential to simply be an experience, the kind of fun you hope to have when you see a movie.

So who is Baby? Ansel Elgort heads this film with the title name and for most he’s a guy that’s come out of nowhere. He’s been in The Divergent series and The Fault in our Stars, but Baby Driver is his first step into the spotlight and as I mentioned above he is surrounded by some major talent. The casting of Baby is key. Picking up a relative unknown works because the audience doesn’t know what to expect from this guy, and this works in the film as he’s surrounded by some dangerous heavy hitters in the crime world and they see this kid with his I-pod, they can’t help but wonder what’s up with this guy. Our intro to Baby Driver, wastes no time at showing us just what Baby can do as he is the getaway driver for a bank heist in Atlanta.

Right away we our thrust into Baby’s world as we are listening to his tunes as he navigates the streets of Atlanta making his escape.  The stunts are incredible and well choreographed as though watching an elaborate dance with these cars. By the time Baby gets his passengers to the safety of the garage, our hearts are pumping and I’m grinning so big because I know this is only the start.

Running the crime spree is Doc (Spacey), he’s the kind of crime boss that tends to be the smartest guy in the room and knows how to put together a team for a heist, and since Baby has been his getaway driver for years he views him as a bit of a good luck charm. Doc is a fast talking no non-sense crime boss that seems to care for Baby in a patriarch sense, despite hiring him for jobs to help pay off a debt. Just what the debt is from, I’d rather you hear it from Doc yourself because the story is entertaining with Spacey’s delivery.

As for his cut of the money, Baby is saving it up so he can one day get away from this life of crime. At home we see him with his step-father who is deaf; Baby has been in his care since his parents died in a car crash that also left him with a hearing disability as well. The relationship between Baby and Joseph (CJ Jones) is a sweet one and gets us to see more of Baby’s personality, where he really is just a good kid that is caught up in a bad situation. But it’s when Baby meets a young girl at a diner, which one just can’t help but root for Baby. Debora (Lily James) is another fresh face that helps steal this movie and inject heart into it. There’s the whole love at first sight angle we see in movies, but here we get to see perhaps the first love at first song, as what catches Baby’s attention is Debora singing.

Music plays such a crucial role to this film, sure it’s one thing to have a great soundtrack but here music is injected as a way to put us into Baby’s world as he is always listening to his I-pod, he has one for different days and different moods. It’s more than just a mix-tape and there is this great moment where Baby shares his music with Debora at the laundry mat that is so wonderfully shot and choreographed.  Wright takes what is already a sweet and innocent scene of two young people and a relationship blossoming during a conversation over a song. It’s the execution of this elaborate dance with the camera that on a technical level is amazing. Then there are the re-mix tapes that Baby enjoys making with random conversations, this is simply one of those cool things that I have a feeling will soon become a thing we’ll starting seeing in our Facebook feeds.

As for the cast of talented cast members playing cool smooth criminals, everyone seems to be having a blast. Everyone has their part to play and to get into these characters and the crimes that occur would ruin the fun, but I will say Jon Hamm as Buddy is so fun to watch here, I never was a fan of Mad Men but Hamm is a guy I’ve liked, but here he steals plenty of cool moments and will quickly have you forgetting his clean cut suit and tie look from the show. Adding to the mix is Darling (Eliza Gonzalez) who is Buddy’s love interest; they’re a fun and violent modern day Bonnie and Clyde that deserve a film of their own together. Then there is Bats (Foxx) who owns the title of the crazy one in the group, to a point this may be the least fleshed out character of the bunch but Foxx gives the character so much charisma it becomes difficult to accept he’s just a supporting character because he owns many of the scenes that he is in.

We’ve all gotten used to seeing the crime story where the hero declares he’s just doing one last job, but something always pulls him back in when he attempts to walk away.  The film does indeed flirt with this storyline but it gives us something fresh, we are constantly shown different takes on sequences that feel familiar.  Heck who’d have thought a shootout to the rhythm of “Tequila” would be something that would work? With references to classics like The Getaway, The Italian Job and plenty of homage’s to other crime films throughout I’m already excited about seeing this film again. It’s a crime story but there really is so much heart in this film where to a degree I could see this as a revised story to how Steve McQueen met Ali MacGraw before The Getaway occurred.

Bill Pope has been Edgar Wrights DP for some time now, with films like The Matrix and Spider-Man 2 under his belt it really shouldn’t be a surprise how great the camera work is but it truly is remarkable. How certain shots were achieved with the car stunts I’m in awe especially when you factor how many moving parts are going on in these chase sequences. On a technical level this is some of the best camera work I’ve seen all year and hope when the Blu-ray comes out we can see how they pulled off some of these stunts.

I love this movie, I even held off on writing this because I needed to sort out my feelings for the film.  Not often does a film come along that teases a non-stop thrill ride and actually delivers on that promise. This is the film I feel is going to steal the box office, not as a picture that lingers in the top #1 spot but a film that will be 3rd and 4th and quickly recoup its cost.  The studio had confidence to push it up from a cushy spot in August to a week before the release of the new Spider-Man film which is a bold move; hopefully it’s a move that will pay-off big.

Brent Lorentson is a horror writer and film critic based out of Tampa, Florida. With a BA in Digital Film, he co-wrote and co-directed Scavenger Hunt. His short stories have appeared in various horror anthologies. In 2019 his short script Fertile Blood will be a part of the anthology horror film Slumber Party. He is currently working on his first novel A Dark and Secret Place set to be released in late 2019. Favorite Films: Taxi Driver, Fight Club, I Saw the Devil, The Wild Bunch, Dawn of the Dead, A Clockwork Orange, Pulp Fiction, Heathers, The Monster Squad, and High Fidelity.
Despicable Me 3 The Zookeeper’s Wife (Blu-ray)