Posted in: Disc Reviews by Gino Sassani on July 3rd, 2017 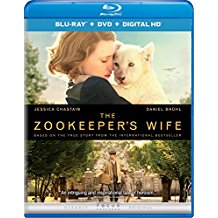 It appears that we have been due for one of those untold stories amid the many tales of courage and bravery both fact and fiction, real and imagined, that have been told of the World War II era. There have been plenty of the battlefield hero films that include last year’s exceptional Hacksaw Ridge from Mel Gibson. Then there are the quiet and unlikely heroes. These are people who did incredible things that were often unknown during the war and often even after it was all over. Schindler’s List has become the gold standard for these kinds of emotional war movies. The Zookeeper’s Wife is set in the mold of that kind of a film, telling essentially that very kind of tale. Here the action begins with the invasion of Poland, which was the spark that ignited a local territorial conflict into a global event. It is here at the moment of that spark we find Antonina Zabinski, played by Jessica Chastain, who used her small local zoo to save nearly 300 Jews from the Nazi extermination machine, failing with only two souls during the entire war. This is that untold story which most of you will discover for the first time.

Antonina Zabinski (Chastain) runs a family-owned zoo in Poland. The film opens with a rather sentimental tour of the people who work at the modest attraction and her welcoming the day’s patrons at the zoo’s gates. She has a way with the animals that includes lion cubs which roam the residential corridors rather freely. With this early look at the idyllic life, one almost feels the dread that something is going to happen which will upset this peaceful life. That “something” is the invasion of Poland by Nazi forces and the occupation of the country for the duration of the war. She is asked to help a few Jewish friends escape the Nazi roundups, and the small gesture eventually leads to a full-scale secret operation where the refugees are hidden below in the zoo’s catacombs of cages while Nazis are entertained above to avoid suspicion. The Nazis include zoologist Lutz Heck (Bruhl), who uses their common interest in animals to stay close to her. She flirts to maintain his interest and to keep the zoo from falling under tighter control by the Nazis. Both are using each other while the “guests” listen for a particular piano piece to alert them that they may come out of hiding during the late night hours. Of course, her husband (Heldenbergh) is unhappy with the fake attention she gives.

While the actors all do remarkable work, there’s not enough time to really cement the chemistry and relationships of the characters. Again the fast pace and the need to skip over important aspects of the story are what provide these awkward performances. We don’t see the husband and wife acting much like a couple, so the tension of her necessary flirts and his reaction don’t come off as crucial as the story requires.

The Zookeeper’s Wife is presented in its original aspect ratio of 2.40:1. The 1080p image is arrived at with an AVC MPEG-4 codec which delivers a near constant 29 mbps. The high-definition image presentation is a bit of a disappointment. The image is soft. Focus is often blurred, even in close shots. The colors are muted, which is entirely appropriate for the time depicted. There’s actually evidence of some nice cinematography as the atmosphere goes from over-bright to the dreary times of the occupation. There are wonderful animal shots and some impressive production design. But it’s all tainted by an inferior transfer here. Textures are virtually non-existent. Black levels are weak and noisy.

The DTS-HD Master Audio 5.1 is another disappointment. The levels have balance issues. The loud moments will overwhelm if you set the levels to catch some dialog and more subtle sounds. I hate having to ride the remote, but I had to here. Subs are the one place this audio presentation does shine. You get rather nice dynamic moments during the actual invasion. Surrounds are hit or miss with some nice animal sounds. Too much of the surround field is flat and listless.

Deleted Scenes: (3:57) There are six with a play-all option.

The Making Of The Zookeeper’s Wife: (7:06) This brief behind-the-scenes feature is mostly sound bites with a montage of production footage.

The Zabinski Family: (3:57) Meet the couple’s children, who describe the acts of their parents. Cast and crew offer more input.

Of course, I understand that the story might not have been able to be sold as a three-hour film. That is particularly true at the beginning of the summer season that saw such box office monsters as Beauty And The Beast and Logan. Perhaps a better time would have afforded the film the luxuries it requires to become an important piece. Perhaps home video will give it the shot it never had at the box office. It’s a story worthy of being told. But it’s a story that was worthy of being told right. You might want to pick up a copy fast “and bring as many as you can”.

Gino Sassani is a member of the Southeastern Film Critic's Association (SEFCA). He is a film and television critic based in Tampa, Florida. He's also the Senior Editor here at Upcomingdiscs. Gino started reviewing films in the early 1990's as a segment of his local television show Focus. He's an award-winning recording artist for Omega Records. Gino is currently working on his 8th album Merchants & Mercenaries. Gino took over Upcomingdiscs Dec 1, 2008. He works out of a home theater he calls The Reel World. Favorite films: The Godfather, The Godfather Part II, The Body Snatcher (Val Lewton film with Karloff and Lugosi, not the pod people film), Unforgiven, Gladiator, The Lion King, Jaws, Son Of Frankenstein, The Good, The Bad And The Ugly, and Monsters, Inc.
Baby Driver The Belko Experiment (Blu-ray)