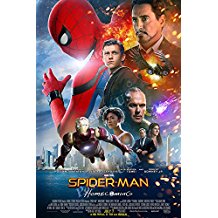 “If you’re nothing without the suit, then you shouldn’t have it.”

Email hacks have taken over a big part of our nation’s conversation in recent times. Lost in the election leaks is the fact that Sony executives were also hacked, with many embarrassing emails released on the internet. The result was that the Sony Spider-Man plans for an extended universe of their own fell victim to the reveals. Executives were out of jobs, and suddenly Marvel and Sony were at the negotiating table, and while Sony still retains certain film rights to the friendly neighborhood, the character himself has now joined the combined MCU, and all is now right with the universe. We saw flashes of that integration in Captain America: Civil War. Now it’s time for our favorite webslinger to headline a movie of his own, and in more ways than one, this truly is a Spider-Man: Homecoming.

The first thing that Marvel got right was casting Tom Holland in the title role. Both McGuire are Garfield had their strengths and certainly delivered powerful moments in the part. Tom Holland brings us back to that innocent high school student who isn’t quite comfortable in the new skin of a superhero. For the first time, I felt like I was experiencing Spidey’s adventures rather than watching them. Holland’s enthusiasm and passion is completely contagious, and that was obvious from the Captain America appearance.

The next step is to find a filmmaker who is a fan of the material and can avoid the temptation to make a film that plays out as too self-indulgent. (Just check out any recent Michael Bay or George Lucas film and you’ll know exactly what I mean.) Jon Watts is a fine choice. He is able to deliver a larger-than-life film that doesn’t forget the little things that make the movie enjoyable. Spider-Man: Homecoming has more heart than a comic book movie should be allowed to have. It serves as a stark reminder of the difference between the MCU and DC’s attempts to create an entertaining world of their own. It’s the simple moments that ring just as true here as the explosive action scenes. In the past Spider-Man has often had one or the other. This is the first time with the possible exception of Rami’s second film that both work flawlessly to provide a fun and enjoyable ride.

Watts proves that you can reboot a character without running through the origin story for a third time. Honestly, I don’t think any of the fans were up for another radioactive/genetically mutated spider bite. Spider-Man: Homecoming uses two nice vignettes to get us started in this world. The first introduces us to Michael Keaton’s Adrian Toomes. Toomes owns a salvage company that is tasked with cleaning up New York in the aftermath of the invasion we witnessed in The Avengers. He’s invested everything he has in the job and has the rug pulled out from under him when a government group run by Anne Marie Hoag (Daly) closes the lid on the operation and freezes him out. Toomes has to give up the gig of a lifetime, but not before he’s managed to swipe some alien technology.

The second vignette fills us in on Peter Parker’s experience before, during, and after the events of Civil War. It’s a wonderful “found footage” moment as Parker documents the adventure, much to the dismay of Happy Hogan (Favreau) who is then tasked with keeping tabs on Parker after that incident ends. But how does a 15-year-old kid go back to the mundane world of high school when he’s fought with and against Avengers? It’s too much to ask for, and the results are rather predictable for anyone except Tony Stark. Parker wants to prove himself, and when he stumbles upon Toomes and his alien weapon trade, he is quickly in over his head. Happy isn’t taking him seriously, and Tony is busy…well…being Tony. Left to his own impulsive nature, Parker ends up the target of a super-powered Toomes, who has created giant wings from the alien technology. Of course, Parker learns where his true strength comes from and manages to find his place among the heroes of his age.

Michael Keaton is both an obvious and rather odd choice as the Vulture. His award-winning turn in Birdman almost predicts the role as well as making it a bit too contrived. But none of that matters. Keaton’s portrayal here breaks the one flaw Marvel has tended to have with these films. The bad guys have been a little weak. With the exception of Tom Hiddleston’s Loki run, none of these bad guys can keep up with the heroes. That changes here, and Keaton is powerful. The chemistry between villain and hero is so good that the best stuff comes in a scene inside a car where it’s just Parker and Toomes, not Spider-Man and Vulture. It’s one of my favorite pieces in the film, and it’s all there in the dynamic of these two actors. I hope we have not seen the last of The Vulture. The film hints at future appearances by The Scorpion, and there are two version of Shocker in supporting roles. But it’s Keaton’s Vulture that will stick in your memory long after you’ve left the darkened theater.

The supporting cast tries a little too hard to be diverse and politically correct. Parker’s best friend is Ned Leeds, played by Jacob Batalon, and he’s a wonderful sidekick to Parker’s straight man. He’s the “guy in the chair”. You’ll understand once you’ve seen the film. Laura Harrier is the love interest Liz Allen, and she’s a bit more aloof than we’re used to having Spider-Man’s girlfriends behave. She’s worlds better than Dunst’s MJ, but Emma Stone’s Gwen Stacy rivals the best comic girlfriend to date. The film intentionally plays the other characters against their comic book type. Flash Thompson is actually a smart nerd here. Fortunately, it’s mostly Ned and Parker which plays quite well throughout the film. Unfortunately, many of their best moments were in the numerous trailers. Too much of this footage was released early and so was too familiar as I watched the film. This is a rare case where I would have rather less footage had been released.

There are 2 stingers that are both worth sticking around for. The first sets up a potential sequel bad guy. The last one is the best stinger I’ve ever seen. You just need to have patience. Fans of the 60’s cartoon will love the opening theme to the film. Stan Lee has another priceless cameo. Spider-Man’s suit as an AI voiced by Jennifer Connelly. It’s a nice little touch. The actress is married to Paul Bettany who has been the voice of Tony Stark’s AI, Jarvis. He now plays that AI’s evolution into The Vision in the MCU. It’s little touches like this that add something for many of us who are actually paying attention.

No doubt about it. This is one of the best Spider-Man films we’ve seen. We have an email hack to thank for the results. While there have been many attempts to imitate its success, it seems like Marvel has a secret formula that delivers emotional and strong characters with entertaining adventures. These are the feel-good guys of the comic movie just as Marvel was in the early 1960’s when they brought a certain humanity to flawed and realistic heroes with the same kinds of issues and problems that we have in the real world. Stan Lee set it in motion 50 years ago and Spider-Man: Homecoming has tapped right into that tradition. And let’s face it. “You deserve it.”

Gino Sassani is a member of the Southeastern Film Critic's Association (SEFCA). He is a film and television critic based in Tampa, Florida. He's also the Senior Editor here at Upcomingdiscs. Gino started reviewing films in the early 1990's as a segment of his local television show Focus. He's an award-winning recording artist for Omega Records. Gino is currently working on his 8th album Merchants & Mercenaries. Gino took over Upcomingdiscs Dec 1, 2008. He works out of a home theater he calls The Reel World. Favorite films: The Godfather, The Godfather Part II, The Body Snatcher (Val Lewton film with Karloff and Lugosi, not the pod people film), Unforgiven, Gladiator, The Lion King, Jaws, Son Of Frankenstein, The Good, The Bad And The Ugly, and Monsters, Inc.
Money Tuesday Round Up: July 11, 2017