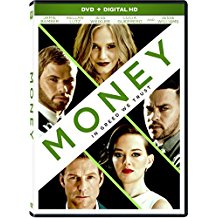 “There are only two things wrong with money: too much or too little.”

This devastatingly simple yet endlessly revealing quote by poet Charles Bukowski appears at the start of Money, a lean, mean, low-budget thriller filled with well-to-do characters who nevertheless feel the need to steal millions of dollars. To be clear, there are more than two things wrong with Money — particularly in the movie’s latter half, after the promising set-up starts to unravel — but the film still works as a brisk and entertaining game of cat-and-mouse mice.

Mark (Kellan Lutz) and Sylvia (Jess Weixler) are a young, likable, and attractive couple who seemingly have it all, including an enormous and stylish house. Mark is a pharmaceutical exec who invites an abrasive work colleague named Sean (Jesse Williams) and his new girlfriend Christina (Lucia Guerrero) over for drinks one night. Turns out Mark and Sean have sold some of their company’s trade secrets for $5 million, with Mark stashing his half of the loot in a safe within his home. The celebratory evening takes a dark turn when a charming stranger named John (Jamie Bamber) arrives at Mark and Sylvia’s door.

At first it seems like John’s worst crime is openly flirting with Sylvia and Christina, but it soon becomes apparent that John knows way too much about his hosts and their guests. Naturally, that means John also knows about the $5 million that Mark and Sean stole from their employer, and he’s not leaving until they hand over the loot. As John holds everyone at gunpoint and smoothly threatens to start cutting off body parts, each character proceeds to lie, beg, and plot different ways to survive the night…and come out of it with some cash in their pockets.

Money is the feature film debut of Spanish director Martin Rosete, who is working from a slick, nasty script by Josep Ciutat. The movie opens with a brief, friendly scene between Sylvia and her handyman Carl (Fredric Lehne), which seems to establish the gulf between the haves and the have-nots. However, it soon becomes clear that Money is more concerned with the type of people for who can never earn enough cash, despite seemingly having it all.

As John nimbly terrorizes his victims, there is also plenty of fun to be had trying to guess what will happen next in this engaging thriller. The story effortlylessly invites questions like, “How does John know so much about everyone in the house” and “Is one of these four people his accomplice?” Of course, we don’t necessarily get satisfying answers to all of these questions, but the movie remains a fun, self-contained ride even when things start to fall apart. (Both for the characters and, to a lesser extent, for those of us watching at home.)

An overwhelming majority of the movie’s economical 85-minute running time follows the five main characters over the course of a single fateful night. Fortunately, this cast has pretty good chemistry. The standouts are Battlestar Galactica‘s Bamber (always menacing and unflappable, even when John ends up tied to a chair) and Grey’s Anatomy‘s Williams (aggressively and amusingly committing to Sean’s douchebaggery). The movie’s ultimate payoff — both figuratively and literally for one lucky character — hits the sweet spot between being surprising and feeling telegraphed only in hindsight. (It’s best not to spend too much time thinking about how preposterous it actually is.)

In the end, Money is well worth the few bucks you’d spend grabbing it from Redbox or watching it On Demand. And you can trust me because “I always tell the truth.”