Posted in: No Huddle by Brent Lorentson on August 24th, 2017 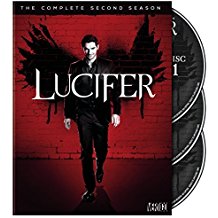 It seems there is no end in sight for comic book properties being bought and turned into movies or television series. Lucifer is one of the newer properties getting the television treatment, and personally this was a title I was looking forward to. With Tom Kapinos (Californication and Dawson’s Creek) at the helm, this seemed like it would be a good fit, though one thing did nag at me. When you have a show called Lucifer and it is about the devil taking a vacation on Earth, is broadcast television really the proper outlet? As a fan of Californication I was excited to see what Kapinos would do with the material and for the most part the show doesn’t disappoint. (Though it would seem with season 2, Kapinos has stepped away from the show to some degree.) Now with the second season hitting DVD shelves, I’m happy to say that show has found its voice and is a helluva lot of fun.

Lucifer Morningstar (Tom Ellis) is indeed the devil and has been vacationing on Earth for a few years with no real desire to go back home. He’s a ladies’ man who runs LUX, one of the hottest nightclubs in Los Angeles. But along with living the playboy lifestyle, he’s also a consultant with the LAPD. Lucifer’s brother, Amenadiel (D.B. Woodside) is an angel that has been tasked by God to not only look after Lucifer but to bring him back to his rightful place in Hell. The rivalry between the two brothers has simmered down this season and that’s actually nice because the pair actually have a good chemistry together.  But then again nothing can unite two people feuding more than a mutual enemy, and for these guys their enemy is their mother. Turns out their mother is the Goddess of all Creation and takes the form of Charlotte Richards (Tricia Helfer), a corrupt defense attorney. Naturally, drama and chaos ensue.

While we have that celestial family drama unfolding throughout the season, we also get the “will they, won’t they” romanic tension between Lucifer and homicide detective Chloe Decker (Lauren German). I’m not the biggest fan of throwing in the romantic angle with these kinds of shows, but there is a nice twist to this relationship that occurs in the latter part of the season that gives me hope it won’t just be your typical run-of-the-mill romance. In many ways, Lucifer seems to be a bit more domesticated and adapting to being amongst the humans. For me, that’s a bummer because…well he’s the devil, and I want to see him lose his cool and release his more of his punishing side against some of the violent figures who cross his path.

If you were hoping for a show that likes to dwell in the demonic or the occult — or anything similar to AMC’s Preacher — well you’re going to be disappointed. Instead, Lucifer plays out more like a police procedural/murder of the week series. This isn’t so bad, but it desperately has me wanting Lucifer and Det. Decker to confront a villain together that will be around over the course of a season. Lucifer’s mom really doesn’t count, but to a degree she is the bad guy of season 2, as she is trying to get her boys back to heaven where they can team up to face their father. (You know…God.)  With more interaction involving the angels and demons this season, things do thankfully go to darker places: seeing Lucifer in his true form is a highlight of the season for me and it is definitely something to look forward to down the line.

One of the show’s charming aspects is seeing Lucifer and his family interacting with Dr. Linda Martin (Rachael Harris), who is Lucifer’s shrink. It’s fun seeing her hash out this family drama, which she isn’t so sure is just a delusion and that Lucifer just might actually be the devil. Add in that Mazikeen (Lesley-Ann Brandt) — a demon without a soul — has taken to Dr. Martin as her new BFF, and well you can guess the hilarity and mayhem that ensue. This is a strong female cast that oftentimes outshines its lead simply because the material they have to work with is so good.

Episode 5/”Weaponizer” is perhaps the game changer episode where many seeds are planted for not only the rest of season 2, but the door is opened for things to come in future seasons: it’s the introduction of another of Lucifer’s brothers, Uriel (Michael Imperioli). I won’t say much more than if this episode doesn’t have you hooked and curious for more, then it’s best you just walk away. Though if you hang in there you are in for a treat, “Trip To Stabby Town” (Ep.8), “A Good Day To Die” (Ep. 13), and “God Johnson” (Ep. 16) are the major highlights of the season as we see the writers and everyone involved finally having fun with this crazy hellish world they have created.

Season 1 was a fun ride, but it definitely had a slow start. Season 2 showed me that this is a show with legs and the potential to keep improving. I fear that being on network television is holding it back, and it can’t take the risks that we would see on a cable television show. It’s definitely pushing limits with the violence, but it is very obvious the show is restrained. With shows like Hannibal, they got away with a lot, but I’m not so sure this is a show that’s eager to go that dark just yet. But if it does, there could be some crazy, cool things in the show’s future.

Brent Lorentson is a horror writer and film critic based out of Tampa, Florida. With a BA in Digital Film, he co-wrote and co-directed Scavenger Hunt. His short stories have appeared in various horror anthologies. In 2019 his short script Fertile Blood will be a part of the anthology horror film Slumber Party. He is currently working on his first novel A Dark and Secret Place set to be released in late 2019. Favorite Films: Taxi Driver, Fight Club, I Saw the Devil, The Wild Bunch, Dawn of the Dead, A Clockwork Orange, Pulp Fiction, Heathers, The Monster Squad, and High Fidelity.
I Am the Blues Oxenfree