Posted in: No Huddle by Jeremy Butler on September 5th, 2017 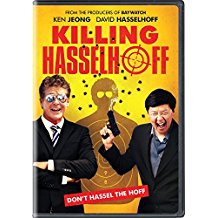 Like normal folks, when I’m hard up for money I may attempt to come up with a quick scheme or two or generate a significant income: may play the lottery (attempt to claim that 700 million dollar jackpot), perhaps sell miscellaneous  items, or cash in some bonds. However, this is the first time I heard of attempting to kill a celebrity to collect the payout of a death pool. Killing Hasselhoff tells the story of Chris, a club owner who finds himself in a desperate spot and in need of money. His only recourse appears to be attempting to facilitate the death of Baywatch star David Hasselhoff. Strange, right? I mean, most people would try to get a loan before contemplating murder.

Chris Kim is a prime example of how anything that can go wrong, will go wrong. His nightclub is failing, he owes $400,000 to a loan shark, he was inadvertently involved in a drug and groping scandal with a child star in his nightclub thereby making his business radioactive, and he has lost his fiancé as a result of the scandal. After having so many things go wrong, I would be taking extra-long looks at the bleach bottle. Chris, however, is determined to turn his life around. Within 72 hours, to get the money he needs to save his club, he conspires with his mentally disturbed friend to kill David Hasselhoff in order to collect on his bet in a celebrity death pool. I guess all the banks were closed.

To me Ken Jeong has always been that weird gangster guy from the Hangover. However, he has made quite the name for himself with his unique brand of comedy, and did you know that he is an actual doctor, and I  don’t mean that he plays one on TV, though he does that too.

Killing Hasselhoff is in a word hilarious, with no shortage of side-splitting humor that I was not expecting at all. My initial thoughts were it was gonna be a sad attempt at comedy that would fall short of the mark. I’m not sure what’s funnier, the convoluted circumstances the main character finds himself in or his attitude about the matter altogether. Like I said earlier, when backed into the corner and at a complete loss at what to do, the very last thing I gonna think to do is kill a celebrity. Jeong handles the situation of being completely and utterly screwed better than any other actor could have.  For example, the scene at Hasselhoff’s autograph signing on the beach. Here he is, on a mission to poison the guy, when he is approach by the “Hoff Army.” This is where is brand of comedy comes into play, instead of de-escalating the situation, it’s like he cannot help himself but insult them, resulting in catching a beatdown from Fat Albert and miniature John Stamos (his words, not mine).

I was never a fan of Baywatch, so my knowledge of Hasselhoff was limited to his cameos on other shows, but he made me a fan in this movie. That made him such a legendary character in this film. I know that hyperbole was the writer’s best friend when it came to that aspect, but it was done in a fashion that made him iconic. He started off obnoxious and a bit of tool, especially when he cancelled that after-party. Eventually that became a part of his charm; even his constant rants about wanting to write, produce, and star in a superhero musical became interesting. Of course the film ends with a homage to his former television show with a slow-motion running scene. In the end, you come to realize that even though he intended to be the victim, he becomes the hero of the story.

There was one person that the story could have done without, it was the character of Fishman, who serves no real purpose to the overall study other than comedic relief. Even then, his contributions to the story become irritating, especially the whole mental breakdown that he has from the beginning of the story until the credits roll.

Not a movie for kids, but adults that are looking for a good laugh should consider watching this film. The movie will not disappoint in this area, and you are likely to become a Hasselhoff fan too. I mean, I’m not going to be watching Baywatch reruns or anything like that, but I will re-watch this movie.

Jeremy Butler is a film school graduate of the International Academy of Design and Technology. He is been writing for Upcomingdiscs since 2012; however, movies have played a big part of his life for much longer. Favorite genres include horror, science fiction/fantasy, and comedy. Favorite movies are V for Vendetta, Boondocks Saints, Kiss Kiss Bang Bang, and The Godfather.
Tuesday Round Up: September 5, 2017 Megan Leavey (Blu-ray)