Posted in: Disc Reviews by Gino Sassani on September 5th, 2017 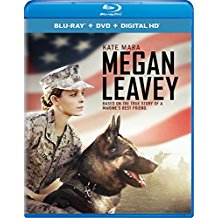 Armies have been using dogs in battle for thousands of years. The Romans would turn the dogs on their enemy as a signal of the approaching legions, hence the expression “let loose the dogs of war”. But in recent decades dogs have found a new, perhaps more noble calling during wartime. Dogs have been used to search for lost soldiers. They have been trained to assist wounded soldiers. They have also learned to sniff out explosives, helping to clear mines and saving the lives of their handlers and hundreds of soldiers and civilians. That’s the kind of dog Rex is. And you’ll fall in love with him just as the titular character Megan Leavey did. The movie Megan Leavey is a bit of a character study, and one of those characters is a German Shepherd.

Megan Leavey is presented in its original aspect ratio of 2.40:1. The 1080p image is arrived at with an AVC MPEG-4 codec at a rather constant 40 mbps. This high-definition image presentation looks quite natural. There is little effort here to contort or color correct the image so you end up with a bright and reference look throughout. Black levels are quite strong but are rarely called for. That means nothing flashes or really pops, but it also means a realistic presentation with some rather nice detail that focuses on the material and not an artistic indulgence.

The DTS-HD Master Audio 5.1 is not really going to blow you away with aggressive surrounds or even very deep subs. Dialog is what is important here, and it stands out. The score is subtle and blends in nicely with the rest of the audio presentation. Subs do come alive during a couple of explosive moments.

Never Give Up: (2:35)  A very brief promo piece with plenty of clips and a few sound bites from cast and crew including the real Megan. There should have been a lot more to add to this release.

Gino Sassani is a member of the Southeastern Film Critic's Association (SEFCA). He is a film and television critic based in Tampa, Florida. He's also the Senior Editor here at Upcomingdiscs. Gino started reviewing films in the early 1990's as a segment of his local television show Focus. He's an award-winning recording artist for Omega Records. Gino is currently working on his 8th album Merchants & Mercenaries. Gino took over Upcomingdiscs Dec 1, 2008. He works out of a home theater he calls The Reel World. Favorite films: The Godfather, The Godfather Part II, The Body Snatcher (Val Lewton film with Karloff and Lugosi, not the pod people film), Unforgiven, Gladiator, The Lion King, Jaws, Son Of Frankenstein, The Good, The Bad And The Ugly, and Monsters, Inc.
Killing Hasselhoff The Cabin in the Woods (UHD Blu-ray) (4K)