Posted in: No Huddle by Gino Sassani on October 6th, 2017 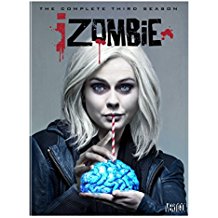 “Turns out we’ve had a hellish night. Peyton, kidnapped by Seattle’s criminal kingpin, saved by a new amnesiac version of Blaine, which doesn’t seem to be sitting well with Ravi. Major, suffering because he promised a zombie named Natalie she’d wake up to a new and beautiful world. And now he can’t find her. And poor Clive. 48 hours ago, he had no idea that zombies were a real thing. What I need to tell him may send him over the edge.”

And by now you might be either over the edge or at the edge of your favorite television seat. But if you’re just confused, it’s because you missed the first two seasons of iZombie, and this is not where you want to start your journey. Check out our reviews of Seasons 1 & 2, then watch the episodes and join us back here once you’re caught up. Bang it Here for my look at the first two seasons.

Caught up? You’d better be, because the third season begins exactly 2.8 seconds after the last season finale. There has been the huge massacre at the Max Ranger facility, and a military group has swept in and cleaned up the mess. Liv (McIver) is given an ultimatum by the head of this well-armed force, Vivian Stoll (Savage). It’s pretty much an “are you with us or against us” type of deal. And with that, we’re introduced to the big idea for Season 3. The Max Ranger stuff is now finished, and we’re dealing with Fillmore-Graves. It’s a private security company that employs only zombies. They do rescue operations, but their real purpose is to prepare for something they call Discovery Day, which is the day the public learns there are zombies. By mid-season we are introduced to a more hard-core leader than Stoll. Chase Graves, played brilliantly and subtly by Jason Dohring. He’s the dynamic new big potential bad and has big shoes to fill replacing Steven Weber from the first two seasons. The company will also be a landing spot for Major (Buckley), who finds it hard to find a job after being the Chaos Killer suspect. The season does a good job of keeping Fillmore-Graves straddling that fence between good guys or bad guys.

There’s also a conspiracy group out there that are targeting zombies. They call themselves zombie truthers and use the web to spread videos of possible zombies taking the city ever closer to the Discovery Day scenario. It doesn’t help that we have a zombie running for mayor in Floyd Baracus (Evans). The show also moves away from the Mr. Boss (Jemison) story with only a cameo appearance of the character.

Ravi (Kohli) is still trying to perfect the cure, but it all depends on Blaine (Anders), who might or might not be faking his memory loss just to start a new life that includes romancing Peyton (Michalka), who becomes a series regular this year, and well earned. Blaine also continues his competition for the city’s brain business when his father literally makes his way out of the deep freeze. Of course, it’s a welcome chance to see Robert Knepper once again. One of my favorite television actors these days. The battle for control is very much like the old rival mob stories as power shifts back and forth, usually after a lot of bodies are dropped. Most of that business is run out of a new zombie club called The Scratching Post, run by Donnie (Hodgson) one of the show’s more amusing characters. For Clive (Goodwin), he’s finally in on the secret. It had to happen. I would have really started to question his detective skills if he hadn’t figured something out by now. That leaves the show with a more ensemble on each case. They now have a kind of Scooby Gang vive going on.

The season finale is a game-changer for the show with a huge reveal that will change everything for the fourth season. There’s also a mild cliffhanger.

The best thing about this show isn’t any of the f/x or murders. It’s the acting of Rose McIver. She’s worth the price of admission. The actress has a wide range, and she gets to use it all here. Each brain means a slightly different personality. This season her brains come from such sources as a dominatrix, a story that carries over for several episode in a bit of a departure for the series. She also has to deal with being a self-absorbed teen, promiscuous CDC investigator, conspiracy nut, office gossip, womanizing preschool teacher, daredevil, D & D dungeon master, and one of Ravi’s ex-lovers. But McIver does more than demonstrate a few personality tics. She works wonders with both subtle and overt facial expressions. She’s literally a genius when it comes to those slight little things that completely sell a scene. It could be a lecherous leer when looking at one victim’s mistress bending over a table. It could be a hint of sadness. Whatever it is she’s doing, it makes the show work. This could fall quickly into camp if she didn’t treat it so seriously.

You get all 13 episodes on three discs. I wish Warner would spread them around just a little bit more to give us a little better image presentation. The only extras are deleted scenes and 2016 Comic-Con panel. The season packs a lot of story in just 13 episodes. In addition to all of the major ongoing stories I talked about, there’s always the episode’s case of the week and plenty of character moments to work in. They work pretty hard, and all you have to do is “to just stay put”.

Gino Sassani is a member of the Southeastern Film Critic's Association (SEFCA). He is a film and television critic based in Tampa, Florida. He's also the Senior Editor here at Upcomingdiscs. Gino started reviewing films in the early 1990's as a segment of his local television show Focus. He's an award-winning recording artist for Omega Records. Gino is currently working on his 8th album Merchants & Mercenaries. Gino took over Upcomingdiscs Dec 1, 2008. He works out of a home theater he calls The Reel World. Favorite films: The Godfather, The Godfather Part II, The Body Snatcher (Val Lewton film with Karloff and Lugosi, not the pod people film), Unforgiven, Gladiator, The Lion King, Jaws, Son Of Frankenstein, The Good, The Bad And The Ugly, and Monsters, Inc.
Taken: Season 1 (Blu-ray) “31 Nights Of Terror” Contest: Win Peanuts Holiday Anniversary Collection