Posted in: Disc Reviews by Brent Lorentson on October 6th, 2017 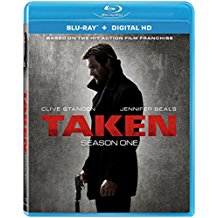 In 2008 Taken first exploded on the big screen and not only created an action franchise but also took Liam Neeson from being a respected dramatic actor and transformed him into an action star.  It’s been nearly a decade, but now the action franchise is getting the television treatment where we get to see the revenge-fueled CIA agent in action before retirement.  Remember the now infamous line, “I don’t know who you are.  I don’t know what you want. If you are looking for ransom, I can tell you I don’t have money. But what I do have are a very particular set of skills, skills I have acquired over a very long career. Skills that make me a nightmare for people like you…” The television series aims to show us just how he developed those skills, and the possibilities seem quite awesome, but does it deliver?

Clive Standen steps into the role of Bryan Mills, a younger version of the character Neeson once played.  Let’s face it, not many actors can be as smooth as Neeson and just ooze the badass persona Neeson has seemed to have mastered over the span of his career, but Standen is a suitable option to hopefully see mold into the character we’ve grown to love.  The series kicks things off as Bryan is travelling with his younger sister, who is tragically killed in the opening moments of the show.  Bryan takes it upon himself to discover who is responsible for her death and in the process is recruited by a special ops group in the CIA run by Christina Hart (Jennifer Beals).

The first episode is fun and filled with enough action to please fans of the movies.  There is so much to appreciate in the first episode, everything from the action beats to the introduction of the characters is enough give me high hopes for the series. In many ways it feels like a fun hybrid of Alias and 24. The trouble kicks in as we begin to see that the show, while it’s very much about Bryan Mills, it’s not about him being the lone wolf, but rather him working alongside a team, and quite often we see him making critical mistakes.  Sure, I understand it’s through his mistakes he’ll only improve, but in many ways it feels as though we are watching someone else.

As a story arc in the first season we also get to see a relationship blossom between Bryan and Asha (Brooklyn Sudano).  On the surface it works because Asha was the best friend to Bryan’s sister, so obviously we can understand their bond, but really the chemistry just didn’t translate for me, and pushing the romance seemed a bit forced since it occurs so quickly. The direction their relationship seems to go as the season progresses does give me some hope, because I do like the Asha character.

A problem I do have is with the title of the series. For a show called Taken you come into it with certain expectations, and, well, it’s not very often that we see characters actually get taken.  While I understand this is a prequel to the film franchise, I just don’t see much of a real connection aside from the character wearing a cool black leather coat.  The films were so particular about their subject matter and character that I wonder if the show could have worked better simply being called Mills as a for-instance. This isn’t the first time a project from Luc Besson has moved from the big screen to television.  Le Femme Nikita had a very successful run as a cult series for numerous seasons.  Where Season One of Taken leaves off it gives me hope that the future of the series will continue to improve. As the show has some fun pitting Mills against the head of a drug cartel, this does open things up for some dark and violent directions that we have come to expect from the films.  While the show didn’t knock my socks off and was a bit uneven in front half, the last few episodes managed to pull me back in and have me looking forward to the next season.

Taken is presented in the aspect ratio 1.78:1.  The 1080p image is arrived at with an AVC MPEG-4 codec and runs between 28-38 mbps.  This is a really good looking show.  There is plenty of detail without any notable artifacts or compression issues.  The depth and the black separation are pretty good for a television series.  There are points where the show is heavy with the blue filters and saturation, but it works for the moments.  Standen looks properly grizzled in his close-ups, and Jennifer Beals is looking as lovely as ever.

The 5.1 Dolby Digital track is subtle but immersive.  For an action show, it’s a little disappointing that they studio decided to go with a compressed audio format. There are some nice subs and surrounds but it’s all limited by the choice in codec.

On the set of Taken: (4:35)  A brief promo spot for the show with the cast discussing the show.

The show has promise, but it doesn’t quite deliver.  Just as the show had managed to reel me in, the season had come to an end. Hopefully as Season Two rolls on, it will continue this pace and continue to improve.

Brent Lorentson is a horror writer and film critic based out of Tampa, Florida. With a BA in Digital Film, he co-wrote and co-directed Scavenger Hunt. His short stories have appeared in various horror anthologies. In 2019 his short script Fertile Blood will be a part of the anthology horror film Slumber Party. He is currently working on his first novel A Dark and Secret Place set to be released in late 2019. Favorite Films: Taxi Driver, Fight Club, I Saw the Devil, The Wild Bunch, Dawn of the Dead, A Clockwork Orange, Pulp Fiction, Heathers, The Monster Squad, and High Fidelity.
The Wizard of Lies (Blu-ray) “31 Nights Of Terror” iZombie: Season 3