Posted in: No Huddle by Gino Sassani on February 4th, 2018 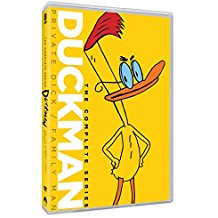 Duckman began life as an underground comic created by Everett Peck. It gathered to itself quite a cult following, and like all such things caught the attention of Hollywood. The USA Network took a chance on the quirky property and cast Seinfeld’s Jason Alexander to voice the crude character. And so Duckman’s wife was killed, and he was forced to rent his own house from his sister-in-law, who was left the estate by Duckman’s wife. His life pretty much sucked. Not only was he renting in his own house, but he was also living with his overbearing sister-in-law and his grandma, who basically just sat around and farted all day long. Duckman considered himself an ace private detective and ran an agency with his partner, Cornfed. Cornfed was voiced by Gregg Berger and was a Jack Webb Sgt. Friday clone. He was the actual brains behind the partnership. Crimes either got solved because Cornfed solved them or Duckman literally stumbled into the answer. His conscience would be found in two talking teddy bears he kept at the office, Fluffy and Uranus. Like Kenny on South Park, the bears would often meet grisly demises, only to return again in the next episode as if nothing at all had happened. Women, particularly damsels in distress, were often depicted as large-breasted and somewhat dimwitted. Most of the humor was decidedly adult. It was not a cartoon intended for children.

The animation was farmed out to Asian companies and was often a hodgepodge of various styles. There was a determined effort to catch some of the 1940’s style in the backgrounds and props for the show. Characters were often a mix of some animal, known or unknown, and humans. Duckman himself was almost a stick figure. He had a pole for a body, a beak and his eyes existed in his glasses which could be moved in almost any way imaginable. The show aired between 1993 and 1997, never gaining a huge audience but keeping a somewhat cult following. Much of the music was provided by Frank Zappa, and the cartoon certainly followed his offbeat satirical bent. Zappa’s daughter Dweezil was a regular on the series. Zappa died before the show really got going, however, so he was never able to fully appreciate the run.

At home, it is more of the same. He is the father of three children. There is Ajax, his eldest son who consistently refers to his father as “dod”. There are also the twins: Charles and Mambo, who are rather unique since they are also Siamese. Then there is Bernice, Duckman’s sister-in-law. Bernice is obsessed about fitness and hating Duckman. His wife Beatrice (whom Bernice is identical to) is no longer with us, or so it would seem.

There are other characters that round out the series. There are Fluffy and Uranus, who are secretaries for Duckman’s PI business. They also look like Carebears. King Chicken is Duckman’s arch-enemy who must end every fiendish plot with “Mwah ha haa, bawk bawk bawk!” But one thing set this show apart was the appalling use of celebrities as extras. King Chicken was voiced by Tim Curry. John Astin voiced the role of Terry Duke Tetzloff. Ben Stein voiced the role of Dr…Ben Stein. Cameos also included Ice T, Gilbert Gottfried, and Judy Tenuta among others.

Somewhere in a mere twenty two minutes, Duckman composes more sick and dirty jokes than your uncle who was taken away by the police when you were eight for indecent exposure. But like your uncle, it feels like home. Sarcastic, downtrodden humor that makes you laugh even though you might hate yourself for doing so. Its topical humor remains relevant today even when other shows have lost their flair. I venture to say it has even improved with age as so few cartoon shows actually do. This show also featured Jason Alexander before he became so famous for being in Seinfeld. The only real weak point of the show was the tendency to make the show more into a family sitcom instead of about Duckman and Cornfed and their public investigator cases. The best jokes are easily when Duckman is on the case and trying to schmooze some client into hiring him. The very first episode in the set, Noir Gang, is a great example.

You get all four seasons on 10 discs with a pretty good collection of short extras.

Duckman is as crude as South Park without being near as funny. Too many of the references are so obvious that it ends up appearing forced. There’s nothing subtle about this mess. I had heard a lot about the show and so was eager to try it out. The experience left me with a feeling of: Huh? Stay away from this show. If you pop a disc in, pretty soon you’ll be asking yourself, “What the hell are you starin’ at?”

Gino Sassani is a member of the Southeastern Film Critic's Association (SEFCA). He is a film and television critic based in Tampa, Florida. He's also the Senior Editor here at Upcomingdiscs. Gino started reviewing films in the early 1990's as a segment of his local television show Focus. He's an award-winning recording artist for Omega Records. Gino is currently working on his 8th album Merchants & Mercenaries. Gino took over Upcomingdiscs Dec 1, 2008. He works out of a home theater he calls The Reel World. Favorite films: The Godfather, The Godfather Part II, The Body Snatcher (Val Lewton film with Karloff and Lugosi, not the pod people film), Unforgiven, Gladiator, The Lion King, Jaws, Son Of Frankenstein, The Good, The Bad And The Ugly, and Monsters, Inc.
10 Cloverfield Lane (UHD Blu-ray) (4K) The Guardian: The Complete Series