The Guardian: The Complete Series

Posted in: No Huddle by Gino Sassani on February 4th, 2018 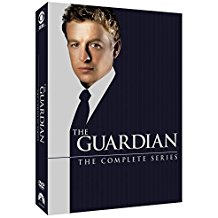 Simon Baker is riding high these days. His hit series The Mentalist was the highest ranked new drama of the year when it first debuted. That accomplishment got the show paired with CSI in that enviable Thursday night time slot. I’m amazed when I hear folks tell me how the actor appeared to come out of nowhere. A few film roles and he’s Mr. Television. Well, count me in with the small group that isn’t so surprised and saw him coming as far away as 2001 with a sleeper CBS series called The Guardian.

Baker played Nick Fallin, a talented young lawyer who just got busted for cocaine. Nick won’t see the inside of prison, however. His father, Burton (Coleman) is the senior partner at one of Pittsburgh’s most influential corporate law firms. Instead of jail, Nick is given five years probation and ordered to serve 1500 hours of community service. His court ordered assignment is Legal Services of Pittsburgh, formally Children’s Legal Services. He’s placed under the charge of Alvin Masterson (Rosenberg), an idealist who set up the law clinic originally to speak for children who have no one else to do so. He’s resentful of Nick’s pampered lifestyle and at first wants to make the gig hard enough on him that he might ask to be assigned elsewhere. Eventually they warm to each other as Nick becomes more vested in the job than he thought he would be. Much of the show’s conflict is derived from Nick juggling these two worlds. He still has a duty as a shark attorney for his father’s firm, yet must find time to help these indigents and children who have come to the clinic for help.

It was a rather clever spin on the old lawyer procedural. Baker plays it very low-key but still manages to shine. Nick shares his arrogant nature with his Mentalist character, but here his heart is usually in the right place, even if it doesn’t usually start there. There are some good story arcs dealing with his addiction and the problems it could cause him if he falls off the wagon. Dabney Coleman is perfectly cast as the absent father who lives for his firm. Nick’s mother died when he was young, but Burton never really found time for his son, instead shuffling him off to boarding schools and eventually college all of his life. Now as he’s gotten older Burton wants to connect with his son, but doesn’t really know how anymore. Wendy Moniz joins the cast early in the season and remains for the show’s run. She plays another young idealistic lawyer, Lulu Archer. She’ll eventually be Nick’s main love interest. While not a particularly dynamic actress at first, she does grow with the role. She’s one of those actresses who can say a lot with her eyes. In fact, one of my most vivid memories from the show’s initial run was the short little segment of her in the opening credits starting with the second season.

As good as I always thought the show was, it was never a ratings winner. It lasted only three years and quickly fell into obscurity when it was over. I’m quite sure that it’s only the popularity of The Mentalist that got these episodes released on DVD at all. What is important is that a new wave of fans might now have the opportunity to discover the show. This was one of those I really wanted but suspected would never come. Imagine my surprise when I first learned of this release. It was like a Christmas present. Open yours today. You’ll find all three seasons which clocks in at 67 episodes on 18 DVD’s.

I’m not sure what it was that first attracted me to the series. I missed at least part of the first season when it aired. It’s likely just one of those shows I caught in passing, and it grabbed me. It certainly didn’t interest me from any buzz or description I had heard. CBS never really sold the series well, and it is a bit quirky for the normal law series crowd. I’m hoping you’ll give it a chance now if for no other reason than I’d really like to get the first two seasons. “Whatever it takes.”

Gino Sassani is a member of the Southeastern Film Critic's Association (SEFCA). He is a film and television critic based in Tampa, Florida. He's also the Senior Editor here at Upcomingdiscs. Gino started reviewing films in the early 1990's as a segment of his local television show Focus. He's an award-winning recording artist for Omega Records. Gino is currently working on his 8th album Merchants & Mercenaries. Gino took over Upcomingdiscs Dec 1, 2008. He works out of a home theater he calls The Reel World. Favorite films: The Godfather, The Godfather Part II, The Body Snatcher (Val Lewton film with Karloff and Lugosi, not the pod people film), Unforgiven, Gladiator, The Lion King, Jaws, Son Of Frankenstein, The Good, The Bad And The Ugly, and Monsters, Inc.
Duckman: The Complete Series My Entire High School Sinking Into The Sea (Blu-ray)