Posted in: News and Opinions by Archive Authors on August 31st, 2006 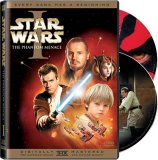 Discussing the old school DVD’s that still sound and look great in the era of Blu-Ray and HD-DVD technology.

Say what you will about Star Wars: Episode I — The Phantom Menace, but there’s no doubting that it’s one of the best sounding films of all time on DVD. In my opinion, it is THE BEST. By now the film looks a little outdated, grainy in places and just fuzzy and washed out in others despite being certified by THX, but the sound more than makes up for it.

The subsequent…Star Wars films also sounded great and looked even better, but there was always so much going on in action scenes that the surround sound system never had a chance to catch up.

Thankfully, this was not the case in TPM. The sounds are separated nicely and each effect gets a perfect amount of detail, resulting in one of the finest demo discs ever to grace the old-school DVD market.

I could talk about various scenes in the film, and how awesome they sound, but when you mention TPM in demo disc terms, it’s better to simply cut to the chase. Literally.

The scene in question is the “pod race”, which is the very heart and soul of TPM, and in my opinion, legitimizes the film being made. Yeah, the Obi-Wan/Qui-Gon/Darth Maul lightsaber finale was pretty sweet, but it doesn’t hold a candle to the adrenaline pumping and aesthetically perfect pod race scene. When I first saw the film in theaters, my jaw dropped, I perked up in my seat, and glued my eyes and ears to the screen and speakers. Quite simply, it was one of my most memorable movie theater experiences of all time.

At home, the pod race is even better. You can rewind, watch certain parts over and over again, turn the volume up and turn it down.

The sounds of Star Wars are on display in the pod race scene, from the hum of racing engines to the crackle of a Tuskin Raider rifle report. Lucas may have fumbled the ball in other places — dialogue being chief among them — but Lucas always knew what TPM was supposed to look and sound like, and captures every sound detail perfectly with a bass-heavy and powerful Dolby Digital 5.1.

The Phantom Menace may suck, but it sounds great. It is THE BEST sounding film on DVD.