Posted in: News and Opinions by Michael Durr on August 30th, 2007

Xbox Live Arcade decided to spring a super secret release on us that was not made public knowledge until it showed up. Poof! Streets of Rage 2, one of the best Sega Genesis Beat em ups hits the marketplace for a mere 400 points. The game besides featuring the same great gameplay featured two new characters; Max Thunder and Eddie “Skate” Hunter in addition to Blaze and Axel. The story can be seen below from YouTube. Yet another *beeping* title for me to get when the Xbox 360 returns from McAllen repair center! 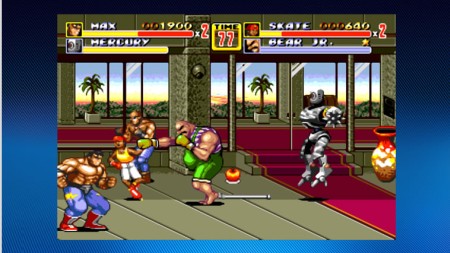 Michael Durr has been reviewing movies for the better part of fifteen years now. He primarily enjoys thrillers, sci-fi, animation and even a little courtroom drama. His favorite films include Escape from New York, the Goonies and anything with Alyssa Milano. When he’s not praising Kurt Russell as the greatest actor of our time or scratching his head over a David Lynch flick, he’s spending time at home in Texas with his lovely wife, Lori and his amazing son. How they put up with him is a mystery, but even Basil Rathbone doesn’t have the time to solve that one.
Happy Judgment Day 10th Anniversary! What Dreams May Come (HD DVD)