Posted in: Dare to Play the Game, News and Opinions by Michael Durr on September 19th, 2007

Turbo Cd’s on the Wii, Gamestop Manager on Suspension and a Washer on the way to my house – Welcome to the column that is always on even if the writer is somewhere between a wounded animal & rigor mortis known as Dare to Play the Game.

Welcome to another edition of Dare to Play the Game. I finally started playing my Xbox 360 again. Played a smattering of Dig Dug (good stuff) and Gauntlet (I forgot how frustrating this game is) and I also started playing WWE Smackdown vs Raw 07. Getting used to the new grapple system is interesting but I’m already having fun with it. Unlocking some of this stuff will take some major time but outside of the crazy achievement where you have to beat everybody on legendary or the online ones where you have to win 20 in a row (unless somebody is willing to boost for me); I think I’ll be playing this for a while. I did also download Bomberman Live after much consideration and should be providing a review by the end of the weekend. It will be the first review that I will do with some help from my girlfriend (who might be playing this right now). Yes I appreciate finally having a gamer girlfriend. And she’s amazing in some many other ways too. 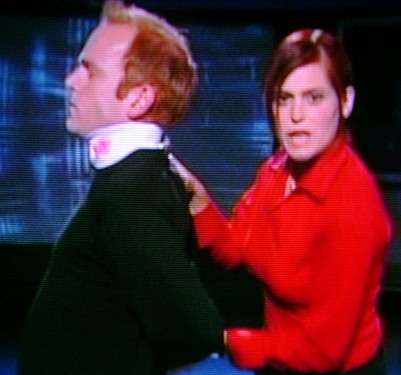 This would be the proper technique to subdue a man such as Adam Sessler. Notice the pressure, and notice the form that Morgan demonstrates on her subject to provide the proper advantage. Personally I would just have tazered the guy but after that university incident, perhaps it is just best to snap his arm in several places.

The TurboGrafx-16 is a nice addition to the Virtual Console. Don’t get me wrong. But it’d be nice to have more. Hudson know what I’m talking about! They’ve announced that, starting next month, they’ll be rolling TurboGrafx CD and TurboDuo games onto the Wii’s retro catalogue. Games from both systems will set you back 800 points, and the plan is to make them available across all regions. Yes, Europe and Australia, that includes you as well. As for games, Ys Book I & II and Chou Aniki will be amongst the first available. Took them long enough, but between today’s other announcement and this Nintendo finally seem to be coming around to just why we were so excited about the Virtual Console in the first place.

Turbo CD & TurboDuo games on VC, could I finally have a reason to buy a Wii? Really?!! I can play Y’s Book I & II (you have no idea how many hours I’ve wasted away on those) and eventually play Dracula X Japanese edition! Sign me up. *reads the fine print* *Wii still has no clue what to do about their lack of hard drive situation*. WTF; so I have to waste away on a 2gb SD card? These are cd games people; not NES carts. Unless they start stripping away cd music (which was one of the best things of the two mentioned above games) or compressing them they are going to eat up some serious space. *sigh* I wish I could just play my old turbo cds and super cds on the Wii. That would be the more logical thing. I guess I will deal with my 360 for now until they fix the HD situation. Then I’m soooo there. Because right now, I’m kinda afraid to hook up my Turbo Duo. Even though I really really want to.

The Chinese government may not want kids playing it for hours, but Counter-Strike is good enough for police to play – as anti-terrorism training games. Over 300 members of the Tianjin police force took over an internet cafe on Wednesday for a three-day competition (including a team of judges to ensure no one was ‘cheating’), and took to heart the mantra of “Enhancing police forces through technology”:


After the competition was announced in March, Zhang [Bin, one of the competition organizers] said, police officers were enthusiastic. Now almost half the total Tianjin force are regular players.


“Of course, they play, or should I say train, after work,” he added.


Officers reported noticeable improvement in self-protection on field missions after the play, Han said, stressing the game was only “a supplement to their traditional means of training.”
Now all they need is an outpost in Second Life to recruit officers, and they’ll be in business.
Counter-Strike, China police’s latest tool of anti-terrorism.

Interesting, there are actually a few police simulations that exist in semi-video game form and do quite well for the advancement of law enforcement. However; to see the Chinese police playing Counter-Strike which is consistently one of the best FPS on the PC is well…interesting. How exactly did they notice improvement in the police? Did they show better technique or just decide they were able to frag…I mean rack up the body c…errr show precision aiming technique. Yeah. I’m just waiting for the Chinese police to deal swift justice to the first student who decides to create a Counterstrike level based on the police station. Oh you know, its sooooo coming.

Score one for the dumb and lazy students of south Dallas! GameStop corporate has put the kibosh on store manager Brandon Scott’s policy of selling video games to his underage employees, suspending him while the powers that be are “learning about and evaluating Mr. Scott’s concept.” We weren’t the only to post on Scott’s unusual policy and it appears the publicity surrounding his outlook on selling games to kids with good grades got him in hot water with the Man.


Since I’m on board with Mr. Scott’s policy of keeping games out of the hands our nation’s half-wits and do-nothings, I’m off to the screen printer to have my FREE BRANDON SCOTT t-shirt made. Anyone out there know how to start an online petition?
GameStop manager suspended after ‘games for grades’ policy

The original story was that Brandon Scott is a manager for Gamestop in South Dallas. This area doesn’t have the brightest kids so Brandon thought he would refuse to sell games to kids who had the intelligence equivalent to a bag of bricks (until their parents brought decent grades as proof they done well in school). He did this to 24 such students and even promising some a free game if they could show straight A’s. So now Gamestop is beating Brandon down in the back with an old xbox and subjecting him to twenty four hours of Strawberry Shortcake and My Little Pony video games. You could argue the reasonable right sense that he is keeping the nitwits and dumbasses from buying the games or you could argue the business model of what the heck are you doing, we need money approach. My only question is whose denying sales to the clueless adults who buy M rated games for their 10 year old kids and then complain that their kid saw a “boobie”. I find it equally funny Brandon Scott is the name of a former best friend of mine that was bouncing around from job to job in the Houston area. Maybe he moved to Dallas, quick somebody send me a picture of the manager. I’m really curious. 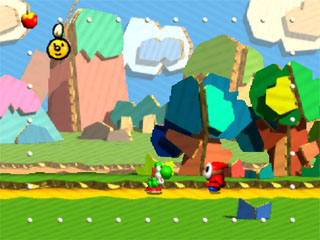 Good thing the Virtual Console will get Turbo CD games soon or else I think they have plum ran out of steam. Yoshi’s Story is a N64 Platformer only involving Yoshi’s. *looks around*. Wow, not only do I detest the N64, but I have an even greater lack of caring for Yoshi. And in this game I get to control six of them! Can I kill myself now? I’m not even sure Mario die-hards will be jumping at this one. What’s next; Toad’s Story? If you have a 1,000 points burning a hole; go find two NES games instead. 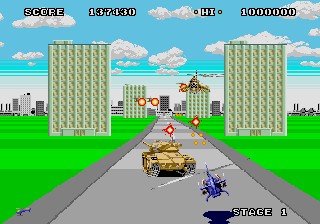 When one attack helicopter game wasn’t enough (or two if you remember Tiger-Heli). This was a decent helicopter game that had an afterburner type feel and controls to match. You had to take on everything from fighter planes to tanks to submarines. Hopefully you’ll be able to defeat them all to reach the guerilla base. It’s a good time diversion just don’t expect the world and you’ll come out fine. 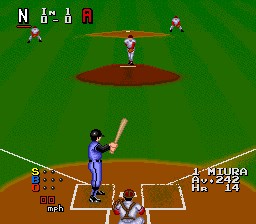 It’s a baseball game, it was on the TG-16, it was not spectacular. Most of you know I love my Turbo Games but I can’t get behind this waste of 600 points. I would say go find another baseball game on the VC but the only other one I know of is the original baseball on NES. So, ummm go mess with Wii Sports instead :). Overall, these three games should be largely ignored and wait for something better next week.

A whole crap load of releases and nothing crazy recognizable. PS2 gives us a Growlanser sequel which I have high hopes for since the first one is such the pretty masterpiece. More Singstar games and a PSP port (Syphon Filter: Dark Mirror) for which I have the demo and haven’t cracked it open to be bloody honest. However, I do own all Syphon Filters so I might buy that in the near future. On the 360 front; Eternal Sonata gives us a RPG to salivate over for awesome graphics and more. Warriors Orochi which is also sporting a PS2 release might be interesting; I’m not sure. I am awaiting more information and it might be a good blind budget buy. The Wii finally decides to have some releases, Annubis II is a true budget affair but Dewy’s Adventure might be a nice sleeper hit. The DS closes us out as it spews fifteen releases. But hey we get Nancy Drew and more Digimon! *sarcasm*

Another week passes and the relationship is very strong. It’s nice to come home to such a wonderful woman. Sarah is a great cook, an amazing lover, a decent video game player (kidding, she is quite good), interesting story teller, and a true confidant. I feel close to her like I haven’t to anybody else in a long time. I’m sometimes a hard person to figure out; even for myself. But Sarah seems to have all of the keys and wants to invest time in me. I just hope I can provide her with a wonderful return and be the best boyfriend I can be. We also bought our first appliance together. A new washer from Sears. I had been left with a dryer by the divorce and devoid of a washer. So I had spent many weekends going to the washateria. However; no more. So by the time you read this, the washer should be delivered and installed from the local Sears. I’ve got three weeks worth of laundry and Sarah I’m sure has a couple since that’s when she moved in. We are certainly going to put that sucker through its paces in the next week. But it will be worth it to not have to visit a washateria any time soon. Now if I could just do something about the *beeping* lawn mower. Well until next time kiddoes.

Michael Durr has been reviewing movies for the better part of fifteen years now. He primarily enjoys thrillers, sci-fi, animation and even a little courtroom drama. His favorite films include Escape from New York, the Goonies and anything with Alyssa Milano. When he’s not praising Kurt Russell as the greatest actor of our time or scratching his head over a David Lynch flick, he’s spending time at home in Texas with his lovely wife, Lori and his amazing son. How they put up with him is a mystery, but even Basil Rathbone doesn’t have the time to solve that one.
Ghost Whisperer – The Second Season Rio Bravo (Ultimate Collector’s Edition)