Posted in: Dare to Play the Game, News and Opinions by Michael Durr on September 26th, 2007

Halo 3, Halo 3, and Just say No To Transsexuals – Welcome to the column that is overloaded with hype and sexual indecency known as Dare to Play the Game.

Welcome to another edition of Dare to Play the Game. In my hand I have the Halo 3 CE Tin. It’s pretty, it’s sexy, I want to have relations with it. (okay not really). In my other hand, I hold a 20 ounce of Halo 3 Mountain Dew Game Fuel. Feeeel the hype. I have not played the game yet; I will soon and hope to have a review on this site by Sunday. Sure, the other reviewers had it up on Tuesday. But I have a job, and I don’t get the game early. The tin looks great seriously, but my only complaint about the tin is how the discs are held inside. Its flimsy and they should have used the harder plastic pegs we are accustomed to. I’ll have to be careful with it so my Halo 3 goodness goes undamaged. Apparently there is already news about this. Perhaps I need to find a double cd case for the two discs. In other gaming news, I took the time to put my Bomberman Live (XBLA) Review up. Great game, great use of 800 points. Expansion pack #2 is set to hit today, most people will probably miss it because they’ll be knee deep in Master Chief’s crotch. Hey you know it’s true. 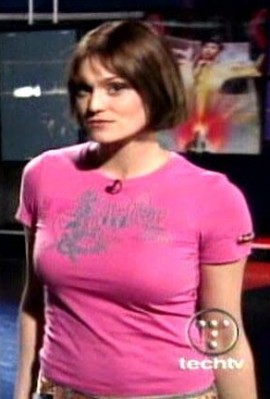 See Morgan had a rough night. She was up the whole night playing Halo 3. She had a needler in one hand and a grenade in the other. It was rough, let me tell you. However, as you can see she is still beautiful. Still pumped up and ready to face another episode of X-Play, or Attack of the Show, or Morgan Webb Alert or whatever she’ll be on for the rest of the week.

It’s weird. Everyone at the Halo 3 launch here in NYC pretty much agrees that Mountain Dew Game Fuel is the most hideous thing to ever come out of the Mountain Dew scientists. At best, it’s a mix of Code Red and Livewire. At worst, regurgitated original Mountain Dew mixed with Hostess cherry pies. Even so, they show up at the event and start handing out free shirts, doling out shot glasses full of the insidious liquid via marketing temps with ginormous backpacks, and suddenly everyone’s going crazy. I had two cups myself. Two! I think you need to drink at least four to rank a free t-shirt, honoring your courage in the face of adversity. They even had ‘Respawn’ stations set up, where women were available to rub the kinks out of your hand, a statement that seems somehow jumbled, but really isn’t.

Microsoft plans to release exclusive Halo 3 content free to Xbox Live Gold members this week, according to a post today on the Gamerscore blog, an Xbox 360 and Xbox Live site run by Microsoft employees.


Gold members who click on the “Unite to Fight” ad on Xbox Live starting at midnight tonight will be able to download four exclusive Halo 3 items: a Halo 3 Dashboard theme, a Halo 3 Gamerpic, and two documentaries about the game.
The theme and picture pack will be available for download at midnight tonight. On Thursday, the “Inside Bungie: Halo 3 – The Story” video, which includes interviews with the Bungie team, will be available. On Friday, Microsoft will release the “Inside Bungie: Halo 3 – New Features” video in which Bungie team members discuss (surprise!) the game’s new features.
If you have any time left, you might be able to actually play the game, which launches at midnight tonight.

Cause when its Halo release week, what else do you expect me to find news about? Not a whole heck of a lot. People in Aussie land actually got the game sooner (or pictures would have us believe) and were probably racking up achievements as well. While in New York and many other places here locally we had wait until midnight (or the next day if we had a job). Apparently New York went all out and had the crazy promo things with Mountain Dew Code R….errr….Live…errr Game Fuel, yeah all over the place. The Burger King guy was there (now that’s creepy) and we even had women rubbing your knuckles gently. Can I get my woman to do that? Possibly; however I’ll have to wrestle the controller out of her hands first.

One of the things my CE tin has according to the back is exclusive Gamer Pics (3) and a Dashboard Theme. Which is nice, but apparently you can get some different ones over XBOX Live if you are a gold member. There have been some other Halo 3 themes and pics over the last couple of months. I downloaded the Best Buy one and have it on my desktop currently. However, I will probably come up with another custom theme soon and import that over since I change my themes pretty regularly. The documentaries are meh at best; they should make Red vs Blue episodes free for the week. That would be a much better use of time.

Shanda Entertainment – one of Mainland China’s heavy hitters in the gaming industry – announced that their subsidiary, Aurora Technology, has frozen accounts of male players who have elected to play as female characters in the King of the World MMORPG. Apparently there are no bans on women playing male characters, but women (and men-wanting-to-play-as-women) will be required to prove their gender via webcam. How exactly is this all going to work? And is it going to last? Who knows – but it certainly seems very odd and not prone to lasting long:
Shanda (Nasdaq: SNDA) subsidiary Aurora Technology has frozen game accounts of male players who chose to play female in-game characters in its in-house developed MMORPG King of the World, reports 17173. Aurora stipulates that only female gamers can play female characters in the game, and it requires gamers who chose female characters to prove their biological sex with a webcam, according to the report.


PlayNoEvil’s commentary points out that this doesn’t seem like it will last long: a webcam gender verification system seems to be fraught with potential problems and headaches, and Aurora is trying to remove at least one aspect that attracts some people to online, fantasy-based games: the chance to be someone or something else.

Only in China, this is one of those moments where the jokes write themselves. I can see why they would do this; but it is a giant case of double standard. In RPG’s I generally don’t play with female characters (though I know a lot who do) but for some reason in fighting games, I more often than not play with female characters (and not just in DOA games either). However, in fantasy games people don’t always want to play themselves and you have to support that. Then you go on to the whole webcam verification thing. So, somebody could dress up as a female (hey crossdressing is cool) or use their girlfriend or a female friend to pose in front of the camera. I guess they are going on the aspect that all gamer guys are nerds so they don’t possess female friends and certainly not girlfriends. (except their blow up doll they got from Amazon.com) 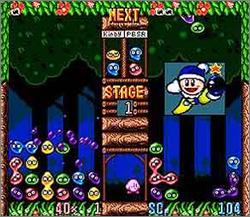 A much better week than previous. Kirby’s Avalanche is not like the regular Kirby games and is instead a puzzle game that plays out like that Yoshi puzzle game or Dr. Mario or anything else with colored objects and matching them. However, despite the simplicity, it is also very addictive. Furthermore you are playing against a computer opponent which adds to the fun. 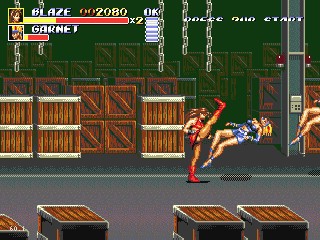 Streets of Rage 3, the final game in the Streets of Rage series. It’s good to see it on the VC. However, this classic beat em up had a ton of controversy. In the Japanese version, one of the mini-bosses Ash is a very typical homosexual. What’s even more interesting is that in the japanese version, once you beat him you can play as him. In the US/Euro cart release you can unlock him with a Game Genie code. Perhaps somebody will find a code out there in VC Land. (since we are dealing with the roms here). Also for those following the series, Zan (A Cyborg) is the replacement for Max from 2. There are some unlockable characters as well including Shiva and Roo (a kangaroo) that can be played with. 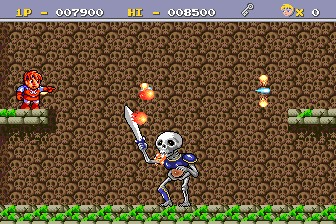 Another of those fun cartoon styled platform games. In this one you are a magic user and you go off to save the princess (yeah we’ve heard this before). But there are seven stages and Tonma can jump and has a great shot power. Err ummm, okay get Streets of Rage 3 this week. That’s all I got :-P.

Well Halo 3 is out, just in case you needed to know. However, there are a few other titles worthy of mention (or the bargain bin, you can decide). The CSI games for 360 and PS2 might be decent; but I’m afraid its a license without a clue. World Series of Poker tries to show it is the best poker game going. However, it will still find resistance on XBOX Live since the oldie but goodie Texas Hold Em (XBLA) is so much easier for people to mess with. Marvel Ultimate Alliance Enhanced is at $30 which includes the expansion pack making it a wonderful deal. Scary game of the week has to go either to the Bratz games (horrible role models for young girls), Jackass the Game (cause we really need a game with Steve-O in it) or Balls of Fury for the Wii. Balls of Fury looks like a very funny movie; but it will be an awful game. You wait and watch. Be very very afraid.

Another week and I’m still here, aren’t we glad? I know I am. Sarah was able to meet two of my good friends this week Patrick and Naomi. We had a blast with Patrick on Friday and on Sunday; we saw Naomi and went and saw Resident Evil Extinction. RE: Extinction was decent but to be honest with you folks it didn’t hold the same magic of the previous installments. I appreciate Sarah and she appreciates me. We seem to have a very good relationship. We also got our grass cut this weekend by a friend of my dad’s. Did a great job and didn’t charge me much. The lawnmower is sitting at a repair shop; I hope to know by the end of the week what is wrong with it. So the house is returning to tip-top shape. Life is okay, and I have Halo 3 to attend to. Until next week, kiddoes!

Michael Durr has been reviewing movies for the better part of fifteen years now. He primarily enjoys thrillers, sci-fi, animation and even a little courtroom drama. His favorite films include Escape from New York, the Goonies and anything with Alyssa Milano. When he’s not praising Kurt Russell as the greatest actor of our time or scratching his head over a David Lynch flick, he’s spending time at home in Texas with his lovely wife, Lori and his amazing son. How they put up with him is a mystery, but even Basil Rathbone doesn’t have the time to solve that one.
Supernatural – The Complete Second Season Reign Over Me