Posted in: Dare to Play the Game, News and Opinions by Michael Durr on October 3rd, 2007

Missing Resolution in Halo, Missing Wii’s for Christmas and Microsoft soon to miss Bungie? – Welcome to the column that is missing pants and dignity (if we had any to begin with) known as Dare to Play the Game.

Welcome to another edition of Dare to Play the Game. Okay, okay so my review of the pretty Halo Tin isn’t quite done. I’d say it is about two thirds done to be exact. It is looking quite good; but I’ve got the replay section mainly to go over with a fine tooth come. One thing that Halo 3 has a lot of and that is game modes. So I’ll have to be careful and be meticulous. At first I was rather meh about the game, but I kinda like it now. Now keep in mind, I’m not one of those gah-gah Halo is king guys but I’m having fun with it. Played three stages to completion and messed with multiplayer for a good long time. My girlfriend and I are still both addicted to Bomberman Live. We aren’t really good at it (though we have our moments) but we have a great time playing it. 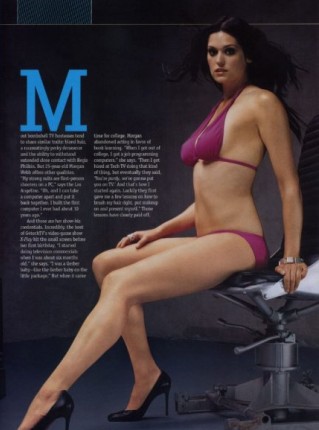 Reader submitted; Kedrix approved. Our old bud Teedub (and faithful Kedrix fan-nation member) handed in this fine little pic of our lovely Morgan Webb. Even if I have used this before; its been probably a year or more. So it’s good and thank you for the cooperation. Now if I can just get everybody to donate $1 to my charity; I’d have a whole $3.50? Honey, we are going to Wendy’s tonight and getting some Jr. Bacon Cheeseburgers!

One item making the interwebs rounds this week was the scandalous revelation that Halo 3 runs at “640p” which isn’t even technically a resolution. However, the interweb detectives did notice that Halo 3’s vertical resolution, when captured from a frame buffer, is indeed 640 pixels. So what gives? Did we short change you 80 pixels?


Naturally it’s more complicated than that. In fact, you could argue we gave you 1280 pixels of vertical resolution, since Halo 3 uses not one, but two frame buffers – both of which render at 1152×640 pixels. The reason we chose this slightly unorthodox resolution and this very complex use of two buffers is simple enough to see – lighting. We wanted to preserve as much dynamic range as possible – so we use one for the high dynamic range and one for the low dynamic range values. Both are combined to create the finished on screen image.


This ability to display a full range of HDR, combined with our advanced lighting, material and postprocessing engine, gives our scenes, large and small, a compelling, convincing and ultimately “real” feeling, and at a steady and smooth frame rate, which in the end was far more important to us than the ability to display a few extra pixels. Making this decision simpler still is the fact that the 360 scales the
“almost-720p” image effortlessly all the way up to 1080p if you so desire.


In fact, if you do a comparison shot between the native 1152×640 image and the scaled 1280×720, it’s practically impossible to discern the difference. We would ignore it entirely were it not for the internet’s propensity for drama where none exists. In fact the reason we haven’t mentioned this before in weekly updates, is the simple fact that it would have distracted conversation away from more important aspects of the game, and given tinfoil hats some new gristle to chew on as they catalogued their toenail clippings.

*raises hand* Is anybody else confused or even care? I mean really care; like you sit at nights huddled near your xbox and your box of tissues not knowing whether to cry or wipe your hands of the sticky residue (use goo-gone; those stickers are murder)? Think about it, the argument is related to the use of 2 frame buffers. Well if you have 2 of them and you are going for lighting effects on each side then having them at both 720 would negate the effect they are going for. I think it still classifies at 720p which is good for me. Regardless, the graphics are gorgeous; if nothing else stands out for this game, that certainly does.


Halo 3 has been hyped as one of the biggest game releases of all time, but Reggie remains confident that it won’t effect Nintendo’s position in the console war.


“Will they sell a lot of software? Certainly. Will it sell hardware? I think it’s an open question,” Reggie commented, going on to explain: “I think that the Halo 3 consumer already has the hardware, because they’re playing Bioshock and Crackdown and a variety of games that are, in the end, quite similar: first-person shooter experience, multiplayer capable online. Tell me what’s new?”


Advertisement:
He goes on to say that Nintendo has no need to counter the launch of Halo 3 in any way. “I am fortunate to have a series of (games) that are all going to drive substantial sales for me and are all targeted to different parts of the consumer mix,” he told Mercury News.

I find it interesting that the person who sits there and asks “What’s new” is exactly the same thing I ask everytime I hear about their console. What’s new….oh can we use the Wii-Mote in a weird and sometimes terrifying way? How about some mini-games, and how about the fact that the only thing diverse is your selection of VC games which are in danger due to lack of hard drive support? But lets say that Halo 3 is not going to move consoles because they are already playing Crackdown (which is not a first person shooter) and Bioshock (which despite being a good game isn’t a crazy mover for the system). He only mentions Crackdown because it had the Halo demo and Bioshock cause it was the last first person shooter that was worth anything. He forgot to mention that there are sports games, rpgs, puzzlers that don’t rely on gimmicks to sell copies or in some cases consoles. Zelda and Paper Mario are the only games to date to really move systems for Nintendo. The rest and majority of the systems that are moving; are moving on gimmick alone.

Those rumors surrounding a Bungie departure from Microsoft sure sound fishy, so we got in touch with some folks who might know a thing or two about it. We were hoping for either a “Yes, it’s true. You’ll find the details of the settlement in the attached PDF” or “Of course it’s not true. Don’t be ridiculous.” Instead we got a double barrel blast of non-confirmation.


The response from a Bungie source? “Talk to your Edelman rep.”


The response from Edelman, Microsoft’s PR firm? “There’s been no such announcement. We continue to celebrate the tremendous success of the global phenomenon that is Halo 3.”


In the meantime, we continue to get e-mails with friend of a friend sourced factoids and ones with none too subtle hints on the matter. We’re drowning in the winking emoticons!

Sounds kinda fishy. Sure this is complete rumor but remember what they always say about rumors. A pound of truth, a pound of lies and a pound of that really good corned beef from the deli outside. Mmmmmmm. Yum. Apparently Bungie is frustrated with how much Microsoft is micro-managing them in their Halo releases. They probably have every right to feel that way. Microsoft has to protect their investment though but they should realize Bungie knows what they are doing and let them control content. A watched pot never boils (which actually is not true, especially if you can stare for a very long time). Anyhow, my best guess would be that Bungie and Microsoft will get Halo 4 out the door but after that will figure out some other method of getting the masses a steaming pile of Master Chief. Mmmmmmm. 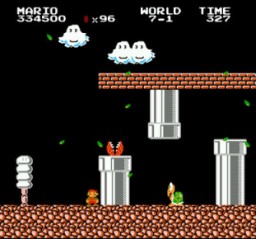 This is the debut of the imports. The first one is the infamous Super Mario 2 but what was released in Japan. This later came to America as part of the multi game-cart that was out on the Super NES. I’ve played it and it is a mother. Throw all normal ideas about the old Super Mario out the window. Sure it looks the same, but its much much harder. Mario and Luigi have different skills, there are bad warp zones and mushrooms and heck there might be even be a secret world or too. Easily worth the 500 points, especially if you never have played it. 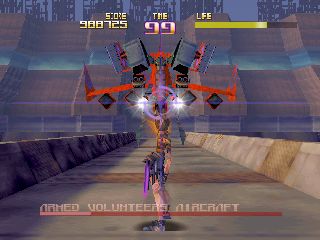 I admit I’m not too familiar with this game as I stayed heavy away from the N64 system. Furthermore being on import; I’m at best only know of this game through screenshots. This is a rail third-person shooter and is held in high regard by those who have seen it. The extra 200 points being charged is due to the english translation of the menus and english voice acting. So the fact that they are going the extra mile is interesting and this might be worth a download.

Most people would agree that the next Zelda for DS is probably the only decent offering this week. I would be inclined to agree. First, how many NBA games do we need? Does anybody have a road map on which if any are even decent? I’ve gotten so confused for the most part that I stopped playing in 2005 I think. I wish I still liked basketball except around final four college time on tv. To be honest, if you really need a sports game this week; go for Hot Shots Golf 5. I’ve played all of the PS editions from 2 on. Great and fun game. Spider-Man: Friend or Foe is a rather cheapie Spider-Man game; I’d rent it or wait for the bargain bin. Interestingly enough PGR4 came out to no fanfare that I can remember except for one odd commercial or two that I saw.

I hate Vista, seriously and with a passion. My parents’ new laptop has it and it’s pretty much dieing a slow death where my dad can’t do anything (and I can’t do much more). So I’m going to attempt to convert it to a XP laptop where it can do much more damage and in a good way. I’ve got all the drivers from the HP website and have a list of everything the laptop came with. Hopefully by the end of this week, he has something that resembles a working computer again. Well what we consider working. Microsoft really needs to fix this OS. Outside of that, me and Sarah are working on the house and getting it slowly to tip-top shape. She’s awesome and has been a great help to me. We really are special together and hope that always continues. Take care until next week kiddoes!

Michael Durr has been reviewing movies for the better part of fifteen years now. He primarily enjoys thrillers, sci-fi, animation and even a little courtroom drama. His favorite films include Escape from New York, the Goonies and anything with Alyssa Milano. When he’s not praising Kurt Russell as the greatest actor of our time or scratching his head over a David Lynch flick, he’s spending time at home in Texas with his lovely wife, Lori and his amazing son. How they put up with him is a mystery, but even Basil Rathbone doesn’t have the time to solve that one.
Jericho – The First Season Halo 3 (Limited Edition)(Xbox 360)