Posted in: Dare to Play the Game, News and Opinions by Michael Durr on December 26th, 2007

The Penalty of Death, MegaMan turns twenty, and Microsoft gives the gift of giving – Welcome to the column that will have a Ho Ho Ho for Christmas but most likely sleep on the couch known as Dare to Play the Game.

Welcome to another edition of Dare to Play the Game. The girlfriend and I decided to start a game together in Marvel Ultimate Alliance (Special Edition) for 360. We played through the first two levels and had a blast. I rotated between controlling Spiderman and Wolverine (and sometimes Iron Man) while she primarily stuck with Venom once he was available. It’s a cool multiplayer where somebody can switch off and on in the game at any time. So if she doesn’t want to keep playing, she can just switch off and I can keep playing if I desire. Then she can resume an hour later if she so desires. Makes for a game we will come back to a lot. Especially since she is cycling off of WoW. Speaking of MMO’s, I finally reached level 20 on a character on GuildWars (equivalent to a level 60 in WoW). Nice feeling until you realize there is so much to do even when you reach the level cap. Oh well, that game benefits from playing here and there for a few hours at a time and not really miss anything.

Not to be outdone by those charitable bastards at Nintendo, Microsoft have kicked off a (beta) scheme whereby any Xbox Live, GFW Live or even Zune user can donate MS points to a friend as a gift. As it’s a beta, the service is somewhat limited at the moment, as you need to know the person’s Windows LIVE ID, but Microsoft spokesman Larry Hryb says a request to be able to gift points to someone using just their gamertag is in the pipeline.

So if you are ever curious as to what to get your favorite columnist, now you know. I wonder if you can just give like the scraps and bits that one accumulates on their account. Like the 100, 150, 200 and so forth that is left over from most of our in-exact purchases. I never figure out how those happen. I mean there are 800 games and 400 games but yet I currently have 550 points on my account. It’s those silly extra content downloads with its odd 200-250 point cost. Nasty little buggers.

This week is not only notable for the Christmas holiday but (possibly even more importantly) this week also happens to be the 20th Anniversary of MegaMan (aka RockMan). Website Platformers.net has taken a little look back at the long running franchise. It’s a nice medium length retrospective that will be perfect for holiday reading if you want to learn a little bit more about the man in blue and all his various games.


Happy Anniversary, MegaMan. May you see twenty more without becoming boring and repetitive.

The little blue guy is twenty years old. I’ve been playing MegaMan games since MM2 in the NES days. I did go back and play the first one, but 2 and 3 will always be my favorites. I also happen to own the MegaMan and MegaMan X collections for PS2. Fantastic compilations and well worth their $15-$20 pricetag. It would be nice to see a new multi-platform MegaMan game that goes in a few new directions. Or perhaps we need a XBLA release where they keep to their 2d roots but it is a new game. Just as long as there isn’t anything like MegaMan soccer ever again.

The death penalty of various MMORPGs is a topic of interest to many people – I’ve seen a number of thought provoking posts, and what more cheerful topic than death of your virtual avatar right before the holidays? Elder Game has a look at the death penalties of WoW and EQ2 and the ramifications of the death penalties, which often spin off to unexpected territory (like the way people play the game):


Most MMO’s, however, have relatively punitive death penalties because they are designed for players that want to be challenged, not just engaged. The theory goes that if a game doesn’t punish you for playing poorly, then your rewards for playing well will be hollow and without much significance. That’s true to an extent … but of course, that’s only true if “playing well” is your motivation for playing the game.


But the death penalty has other side-effects, too. If the penalty is lenient, players find themselves experimenting with more tactics, exploring the landscape more, and poking into nooks and crannies of the game. If the penalty is harsh, they tend to stick with the strategies they know. Good survival strategies become more valuable, and in many games, players find that grouping together makes for a better survival strategy. So we often find that strong death penalties correlate with more grouping.


It’s an interesting little piece on the ramifications of one bit of game design. I always like seeing pieces like these – especially when the discussion spins off to different territory entirely.

As mentioned several times on this column, I play Guild Wars while my girlfriend plays World of Warcraft. One of the pleasures I get from Guild Wars is that I can go into any mission or any quest regardless of my level and give it a go. If I die, at worst I’m transported back to the original town with some goodies and experience. Then I can go try again. WoW is a little different, you have to repair your armor and you can have res sickness that stays with you for a while and makes death more of a liability. So you can’t just go running head-strong into an instance without some planning and working out what you need to. I’m more partial to the idea where you can explore and explore without much threat of death. But I also understand that there are MMO’s that are even crueler about death than WoW. But that kinda game can cause you to venture barely any into an unknown landscape. Sure it rewards you for the whole “playing well” situation but the most important is always keeping it fun. When it stops being fun, it’s time to move on. 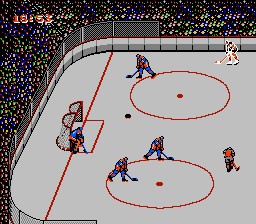 We start this week with the game that made me love hockey in the first place. Well that or my dad yelling at a Rangers game a couple of times a week for most of my youth. Blades of Steel was also interesting because it actually used real sound samples inside a tiny 8-bit cartridge. “Face-Off” or “Fight” were two of the common ones. Blades of Steel was also one of those rare hockey games that actually had fighting back in the day. (A lot of the NHL licensed ones up until the mid nineties removed this). Furthermore, it actually rewarded you for winning the fight. Great hockey game, tiny price. 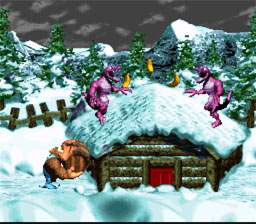 Before it got ruined by crappy games like Barrel Blast, Donkey Kong Country was a fun series of platforming games on the Super Nintendo. A great trilogy that was in the same league as the Super Mario series. This game centered more on Dixie and Kiddy Kong rather than Donkey and Diddy. At least they didn’t name the 4th kid, Doddy. This game featured a landscape that was more of a northern nature and not the jungles we were used to in previous installments. It sold nearly 3 million copies worldwide and was a good little game. 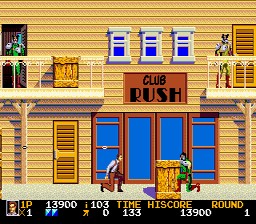 Rolling Thunder is probably one of the least known but best series of games. I pumped relentless quarters into the first beast and was delighted when I saw a sequel on the Genesis console. I tore through that one pretty well and can safely say it is very similar to the first game. The changes are that you can actually play with a buddy. One guy can be the smooth gunner from the first title and the second well they can be the damsel in distress character from the first title. But we find out she is quite a handful indeed and can hold her own. I can easily recommend any title from this list for the week, however the slight edge does go to Blades of Steel.

Christmas was different this year. As in years past, I spent time away from my parents and had to live the married life which meant spending Christmas with my ex-wife’s parents and siblings. Furthermore, my girlfriend decided to have Christmas at our house. She actually likes our house as do I as we hosted a little Christmas get-together with her parents and mine. It actually worked too and everybody got along decently. I’m so used to things not working, that when it does it feels so wonderful. We got a digital camera this year so please watch in the new year where I will put together quite a few auctions to get rid of the games I don’t play or will ever play. It’s a nice one and it should help to provide clear pictures to perspective buyers. Please take my crap :D, okay? Take care kiddoes and have a happy new year.

Michael Durr has been reviewing movies for the better part of fifteen years now. He primarily enjoys thrillers, sci-fi, animation and even a little courtroom drama. His favorite films include Escape from New York, the Goonies and anything with Alyssa Milano. When he’s not praising Kurt Russell as the greatest actor of our time or scratching his head over a David Lynch flick, he’s spending time at home in Texas with his lovely wife, Lori and his amazing son. How they put up with him is a mystery, but even Basil Rathbone doesn’t have the time to solve that one.
The Last Man on Earth The Initiation of Sarah