Posted in: Dare to Play the Game, News and Opinions by Michael Durr on January 30th, 2008

Wii equals gimmick, PS3 overtakes 360, and could a Bear stop piracy? – Welcome to the column that lives in a tiny little farming community called bizzarro world but known to the gaming community as Dare to Play the Game.

Welcome to another edition of Dare to Play the Game. Level 13 is the magic number for my Troll Rogue (Lantanador) in WoW. I’ve spent most of the last week improving my mining & blacksmithing skills. I’m just happy that I can make a Copper Short Sword all by myself. Too bad my rogue uses daggers and other small weapons. I finally started shopping for gear at the auction house which is expensive but does yield some excellent items. But the idea of professions is an interesting one and does give you the feel of doing something more than defeating monsters, solving quests and getting money. I still think they need to lower the price point though. That’s the only barrier I can’t wrap my head around. Good game, sure. Worth $15 a month, I still don’t see it *shrug*.

SCEE boss David Reeves? Totally bullish. He and his pals have got hold of some sales data from European charts trackers GfK and ChartTrack, which indicate that all across Europe the 360 is having a hard time of it against Sony’s PlayStation 3. How hard? This hard: in the key markets of Germany, France, Italy and Spain, the PS3 has now outsold the 360, despite Microsoft’s console enjoying a nearly 12-month head start. At this rate, and barring Sony’s apple cart being unexpectedly overturned, Reeves estimates the PS3 will have outsold the 360 across all PAL territories by the northern summer. Which considering the ever-increasing size and importance of the European market should set a klaxon or two sounding at Microsoft HQ’s secret wartime bunker.

I’m a little shocked. I’m willing to admit I’m wrong. PS3 is popular, somewhere. Europeans obviously love their PS3s. What they are playing on it besides FIFA Soccer I’m not sure though. I guess here in America, the majority of us are Xbox 360 loving snobs. Well like most of the world, the casual gamer is still enthralled with the Wii, but then 2nd we are Xbox 360 loving snobs. I am still trying to wrap my head around PS3 being more popular than MS in Europe. Are they playing Motorstorm or Resistance perhaps? Or is this like the Wii where they are buying the system because its cool and shiny but the attach rate or games bought per gamer is in the toilet. Very curious.

The waggle, some say, won’t help chunky UK kids get in shape. The British Department of Health’s plans to introduce the Wii in schools to prevent childhood obesity has been labeled a “gimmick.” A plan by the Droitwich and Worcester City School Sport Partnership to have children play Wii games to improve health and attendance has been endorsed by the DoH, but derided by the Campaign for Real Education. Says the campaign’s chairman Nick Seaton:


It looks like another gimmick. It’s pandering to the views of the physically idle… Pupils would be far better doing serious competitive sports and games than this sort of thing.


Nick Seaton, Wii Sports hater. Meanwhile, the British government is more optimistic, stating: “We welcome the positive impact that innovations like these can have as a first step towards getting people to participate in a broader range of physical activities and to enjoy the many benefits of a physically active lifestyle.”

Well, Nick is right to an extent. (Told you it was bizzarro world this week) The Wii is a gimmick and kids would be better off doing serious competitive sports and games. However, this is where I get off track. The problem is a lot of today’s kids don’t care for the whole typical participate in a sport and take home a ten cent trophy. So how do you hook them in? Well good ole Wii with fun and exercise in a box. It’s a great idea and should work quite well. The British Government is correct, it is a first step and can help a lot of kids make the logical leap over the exercise hump. Maybe there will be a Wii accent game which will teach them to speak more comprehensibly too. Meh, probably not.

Say No to Piracy and Bears

Ok, not Build-A-Bear as such, but the idea of personalization and adding value because of the personalized nature. An opinion piece at Gamasutra on the issue of game piracy uses Webkinz and Build-A-Bear – and the continued decline of DRM in the music business – as a starting point to talk about what could be done to discourage pirating. Stuffed bears an answer to piracy? What? Well, it’s all about the customization and personalization in the author’s view. Fine for stuffed bears, but what about games?


So what would it mean to build a game *for a specific customer*? I’m not sure. But I’m not talking about binding it to the user’s machine with DRM. No, people will find a way to strip it out anyway. No, the personalization has to add value in some way. DRM doesn’t add value for the customer, it adds inconvenience at best and outrage and resentment at worst (one need only to look as far as the numerous postings about the PC release of the otherwise-wonderful BioShock for an example).


It’s an interesting thought. Clearly, it’s just an idea and while I think the Build-A-Bear-esque customization idea is an interesting one, I’m at a loss as to how designers could implement such a thing in your average game of whatever stripe.

Interesting idea, I’ve been trying to wrap my head thinking of how it could work. Customizing a game to make it unique. Stamping a name or your little design to make it different from everybody elses game. Nice in theory, however horrible in design. Two major flaws to this. One, if X game is different from Y game, then people are going to wonder why Y was put into X game and vice versa. Franky has Dante as his main character, I have Luigi. He has a dragon boss at the end, I have huge giant cause I thought it was cool. People get envious, happens with the bears too. 2nd thing, people will still pirate something even if its their own if that is their tendency. People could care less about somebody else’s name on it as long as they get a cracked copy. Go check out any hack to a cracked piece of software with a serial number unless it is a key gen. Leeeet Warez really gets around. But you have to do something about Piracy because it’s a classic Catch-22. Speak out against it and people tell you to give it a break. Say piracy is okay and everybody and their dog will think its okay to steal, steal, steal. 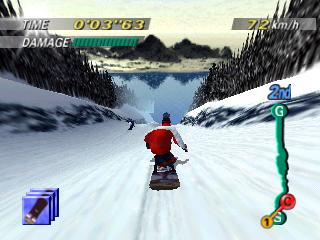 1 game?! And it’s N64??!! It’s Snowboarding?!!!?!!? Geezus crapload on a stick. 1080 Snowboarding was a critically acclaimed game that took over 9 months to develop, it sold over a million copies for its awesome snowboarding engine…it’s…I can’t do it. I’m sorry. It’s f’ing Snowboarding. I’m sure some of you will find it the greatest thing since sliced bread. If you are one of these people, you already know about the game and nothing I can say will sway you otherwise. And yes, I’m blasting another N64 release. Just when Nintendo only graces us with one release for VC and its a *beeping* game with snow and a board. Woah! Somebody shoot me, go spend your 1000 points on 2 old NES games. Much better time spent.

Moved up to 15-0 in All Pro Football 2k8. Had my “fun” with the Legends team again. This time I figured out a way to win 3-0. Yeah, a field goal with less than 5 seconds on the clock. I’m not kidding. That’s so frustrating and so satisfying at the same time. I’m sure my girlfriend will be glad when I finish a season on this sucker. I usually don’t get this frustrated with other games but it does feel like at times that this game has a habit of cheating. Especially with the better teams. I can be up by 2 1/2 touchdowns and lose by 3 points. It’s really weird, like one of my guys will be called for off sides three plays in a row and I’m not touching him. Crap like that. By the way, I did play Undertow, I’ll be honest…it’s another underwater game I don’t like/get. It’s a pretty game, I dig the cutscenes. But the action is so hard to figure out and the whole point is lost on me so I just run around killing things and trying to capture control points. It’s not really that fun though. Add it to the Yaris pile. So free games, I’m stuck at 2-2. Two for Carcassonne & Aegis Wing and two for Undertow and Yaris. Hopefully the next one that ends up free will be a winner. Have fun kiddoes.

Michael Durr has been reviewing movies for the better part of fifteen years now. He primarily enjoys thrillers, sci-fi, animation and even a little courtroom drama. His favorite films include Escape from New York, the Goonies and anything with Alyssa Milano. When he’s not praising Kurt Russell as the greatest actor of our time or scratching his head over a David Lynch flick, he’s spending time at home in Texas with his lovely wife, Lori and his amazing son. How they put up with him is a mystery, but even Basil Rathbone doesn’t have the time to solve that one.
Pioneers Of Television 12 Days of Contests! Day 12: Atlas of the Natural World!