Posted in: Dare to Play the Game, News and Opinions by Michael Durr on February 6th, 2008

The Devil May Cry over installation, Stop smashing my Poker, and downloading from Xbox Live could make you a winner? – Welcome to the column that thinks that DLC is something you might want to change your pants afterwards known as Dare to Play the Game.

Welcome to another edition of Dare to Play the Game. Level 17, ding ding ding. Okay so I’m still playing World of Warcraft (I still have a strange inclination to call it Whorecraft, cause I feel like a dirty dirty one). My new toy has to be the lockpicking skill. I already got it up to 62 which I know for non-noobs is nothing but I’m digging it. I’m completely fascinated by the pick-pocketing skill too. I’m starting to get the mindset where I want to walk into something dangerous and get a cool item. Then get the heck out of dodge. But then again, maybe I just want to mine and help noobies out cause I’m that kinda good natured person. Before anybody asks, no I’m not interested in PvP. I’m talking about grabbing something valuable right from under somebody’s nose. Alliance that is and for the Horde.

As you’ve no doubt heard by now, Devil May Cry 4 has a mandatory install. One which, upon insertion of the game disc, takes 22-25 minutes to complete. And oh how you complained. Some for no reason other than to whine, but others, with a bit more of a point, wondering why it was again they preferred console games to PC games. Well, Capcom have swiftly responded, informing you that while the game’s installing you get 22-25 minutes worth of story primers and concept art, as well as the handy reminder that, well…the human body requires sustenance to survive:


If you don’t want to watch the “Previously, on Devil May Cry…” portion of the install process, go make a sandwich and grab a soda, then come on back. You’re going to be spending some serious time with this game, and we don’t want you going hungry. Low blood sugar will make you dizzy and you’ll need to be focused like an Alan Parsons Project to defeat the enemies in this game.


They’d also like to remind you that it’s a one-off install, and that the whole point of it is so you can play the rest of the game enjoying “near-Super Nintendo speed load times”. Now it’s just up to you to decide whether that’s enough to coax you back from hate’s precipice.

When exactly did the PS3 become a PC? While this is not unheard of (Shivering Isles on the GOTY package for Oblivion/360 for example), it is troubling that this exists. Part of that is the simple fact people buy consoles so they don’t have to worry about things like installing. Most of us have barely gotten over the hump that hard drives in consoles are here to stay. Though personally I wish I could just throw any hard drive in there. The whole scandal of a 120gb hard drive that has xbox on the side and costing $180 is ludicrous. That’s why most gamers either live and die on the PC or live and die on the console.

DMC 4 will be an amazing game either way. I plan to get it eventually, however I am torn of whether to get the regular or the limited edition. A little tip to the readers but Target is selling at least the regular edition with a free strategy guide this week. If the DMC 4 guide is anything like the DMC 3 guide, they will probably need to put in most cars with a crane. Sucker is huge. But then again, DMC 3 (at least the SE) was hard and the 4th installment will probably be harder.
Xbox 360

Xbox is running an interesting contest through their website. Anyone who downloads the free Oceanic Airlines theme on XBLM between now and Feb. 10 will automatically be entered in a contest to win an Xbox 360. The prize package will also include 12 month Xbox LIVE Gold membership, 1600 MS points and an extra special something from ABC and Oceanic Airlines. Six people will win the grand prize with an additional three people winning that extra special something from ABC. Be sure that your Xbox LIVE info is updated with your current info or you will be disqualified. And in case you’re wondering what the hell Oceanic Airlines is, it is the disastrous faux airline used in ABC’s show LOST. (Contest for US only)

For those who are also not aware, Lost is getting their own game for 360. I have a small hope that it will be something decent, but I am prepared to be disappointed. I think this might be the first time where I’m really considering renting a game rather than buy it on the cheap and sell it back on Ebay. I might still go that route. The contest is good and should generate buzz even if I’m not sure what exactly you do with another Xbox 360. I mean I could set it up in another room or simply keep it as a spare for the seemingly inevitable Red Ring of Death. But is anybody worried that if you download the theme for Lost, you might just be forced to enter 4 8 15 16 23 & 42 every 108 minutes?

The Cake is a very naughty girl

In addition to have spawned more cakes, crafts, and covers than you can shake a stick at, Portal may spawn quite a bit more than esoterica. From the low budget production to the delivery method, could more quirky sleeper hits be on the horizon?


Given that it was widely downloaded on Steam, the proprietary game delivery service of Portal developer Valve, it’s hard to get exact unit sales. From a business point of view, however, its profit margin is easily better than AAA hardcore titles that require tens of millions to develop — by contrast, Valve developed Portal’s gameplay from a freeware indie title made by some college kids the company subsequently hired, adding a quirky storyline and a series of puzzles with gradually increasing difficulty. “I think part of the reason we are doing episodic releases and smaller content releases is to allow us to take some of the risk out of the schedule and instead put it into the gameplay,” Valve’s Gabe Newell once explained in an interview.


Maybe, maybe not — but it’s certainly hard to ignore a game that’s been so popular without being any of the things people usually associate with blockbusters.

While I am not all that big on the actual game of Portal (I find Team Fortress and Half Life much more entertaining), I am fully aware and appreciate the impact of the title. A very small title that basically has ballooned into an obsession by many. Sitting in chat rooms, random people will just blurt out “The cake is a lie” without having any knowledge of why they are saying it. I really do wonder how many have played it for more than 5 minutes. But the concept is that you can take small titles and build them into great games is one that warrants some inspection. Just this week, Sony announced that their PSP dev kits price has been cut in half. That way we can see more small titles take a chance and give people something else to look at. Course you run into the problem of shovelware that the Wii and DS run into occasionally but there are some gems out there. 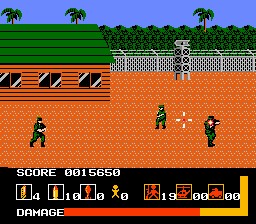 Back to 2 games, and that’s a good thing. Operation Wolf is the first title which was one of the first FPS’s I can remember. However, I always compared it to a complicated form of Hogan’s Alley at best. It was a very good quarter muncher that taught you how to conserve ammo and still be able to shoot everything on the screen as it scrolled from left to right or front to back. Shooting helicopters were quite the task. My question, will Wii owners be able to use their zapper? But for those without Wii’s, Operation Wolf is available on the first Taito Legends for Xbox and PS2 sans light gun support. Le sigh. 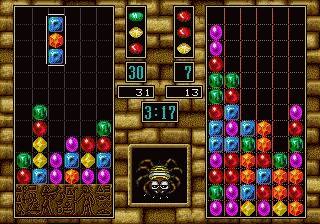 Subtitled the Revenge of Columns (cause that boy was pissed from the first two), this puzzle game came late to the Genesis party, around 1994. However, this release added a story mode and the regular action mode didn’t allow you to play it on your own, meaning you had to have a computer opponent or a physical one. However, there was little gems to get along the way to infuriate your opponent such as Magical & Flashing Jewels. I hesitate to recommend either of these titles this week, but some of you might find them to be worth a shot.

Welp, unlike the Patriots I did finish up my season 19-0 (and yes I did beat it on Superbowl Sunday). The last game was simply brutal. The main problem: O.J. Simpson at RB. He would burn through the line like nobody’s business. However, I figured out how to at least slow him down and force them to pass where I usually dominate. I won the game 17-7. I’m sure my girlfriend is glad the process of winning each game is finally over. I can keep playing the game but instead concentrate on playing it for fun, instead of a very time consuming and frustrating achievement. I might even be able (with a little help) to finish all of the 41 single player achievements on APF2k8 (currently at 23). We shall see. I might just drop the whole thing and play something like Scarface(Xbox) or Yakuza(PS2). Or perhaps I will just drop the money for DMC4 instead. We shall see. Have fun kiddoes.

Michael Durr has been reviewing movies for the better part of fifteen years now. He primarily enjoys thrillers, sci-fi, animation and even a little courtroom drama. His favorite films include Escape from New York, the Goonies and anything with Alyssa Milano. When he’s not praising Kurt Russell as the greatest actor of our time or scratching his head over a David Lynch flick, he’s spending time at home in Texas with his lovely wife, Lori and his amazing son. How they put up with him is a mystery, but even Basil Rathbone doesn’t have the time to solve that one.
This American Life In the Valley of Elah