Posted in: Dare to Play the Game, News and Opinions by Michael Durr on March 5th, 2008

Jack wants to help takeover Take 2, Blu-Ray just not enough and Team Fortress 2 DLC for free – Welcome to the column that can’t be any worse than playing video games with a dvd remote known as Dare to Play the Game.

Welcome to another edition of Dare to Play the Game. In the land of WoW, I am now a level 28 Troll Rogue who is building the big rep so he can get his horse. The undead one. Up to Honored now and spending sometime in the Tarren Mill getting undercity rep and some decent experience. Got both my lockpicking & cooking to 125 which has helped me considerably. During the weekend, I actually picked a couple of locks for other people in game. The 125 cooking let me finally learn expert cooking which took me on the long journey to Desolace and buy an expert cookbook. Currently, I’m still farming big bear steak in Tarren Mill since it’s so easy over there but now I have the option to move up to other recipes when I’m through with that. I’ve also contemplated creating a Dwarf Priest on my girlfriend’s server just so 1)I can see what the alliance side is like and 2)get the benefit of my g/f’s two high level characters. I’m not looking to power level because my main will still be my lonely rogue but I just want some variety and make the fact that I play with my g/f (albeit on the same account) more meaningful.

Looks like I pegged this Thompson guy all wrong. Apparently he’s willing to put his well-honed legal skills to good use in EA’s efforts to acquire T2. Thompson’s rambling missive states:


I am delighted to work with Electronic Arts to evict the Zelnick Trojan Horse from within Take-Two’s corporate walls. In doing so, I can get the new Take-Two into the clear as to the trouble I and others can send its way.


Ooh – good catch, I need to check my PC for that Zelnick Trojan ASAP. Thank God for a Good Samaritan like Jack. In light of this attitude shift I vote we let him sit at the big kids table next Thanksgiving.

I really can’t stand EA and the horse they rode in on. Personally, I’m glad Take Two told EA a flat out no. They make good sports games and the Grand Theft Auto series is an awesome. Plus, they take risks. Sure sometimes they create controversies but do we really want them to fall under an EA umbrella. Which is almost what this sounds like. The Umbrella corporation wants Take 2 to come under the fold. Like a freaking zombie. I watched the trilogy of Resident Evil movies, it isn’t a pretty picture. Then you got Jack coming in here and offering to help in the event that EA feels like doing a hostile takeover. EA, do us a favor and stop trying to flex your money around where it isn’t wanted. Instead, use that money and actually develop a new worthwhile Madden game, or a decent Def Jam game (and I don’t mean Icon). Perhaps bring back the Mutant League series. I like my Grand Theft Auto, Football 2k, Basketball 2k and Bully games just the way they are, without Jack and without EA mucking up the merchandise.

Sure, we know Metal Gear Solid 4 is a big game and all. We didn’t know it was gianormous. Literally! Last week, Kojima Productions producer Ryan Payton said there wasn’t enough space for an English language track on the Japanese version of MGS4 and vice-versa. Just listen to this exchange between Hideo Kojima and Famitsu:

Kojima: For us, we’re not still not satisfied with the quality we can do. You know, there’s not capacity space.

Interviewer: Wait, wait a sec. Saying there’s not enough capacity, are you talking about Blu-ray?


Hideo Kojima, gaming’s Icarus, flying too close to the sun.

A dual layer blu-ray disc can use up to 50 gigs of space. Most PS3 titles keep it to single layer or 25 gigs of space. The argument for the fact that Metal Gear Solid has way too many cut scenes would seem to be adequate here. I mean he can’t even fit an additional language track on there. Heck, Snake himself might be removed from the final version and replaced with a stick figure. However, he will carry a very big but skinny knife. We can probably also forget about a 360 version. I don’t need a giant spindle of discs because Kojima can’t figure out how to cut some cutscenes.

Let’s state the obvious: Valve gave us a heck of a deal with The Orange Box. And if a developer were ever justified in charging console consumers for DLC, it would be Valve through a Team Fortress 2 map pack. But here’s the thing, Valve has no interest in charging us for more maps. Valve’s VP of marketing Doug Lombardi explains that they’d like to offer content…


…for free, definitely, as much as we can. You know, we don’t have full say over that, but we have some say over how that works.


For us, we see it as an investment on our next product. Gamers won’t hesitate when they see a game coming out from Valve. They’ll think ‘I’ve heard of this but will it be worth my money?’ We want to take that off the table.

So now the ball is in the courts of Microsoft and Sony. Given that Epic is struggling to keep mods free on the 360, we’re assuming that Valve is in the midst of the same situation. As for PSN, that platform seems to offer more leeway (but that’s our own logic, not something coming from Valve).


One thing’s for sure—if PSN users are downloading the same content for free that Xbox LIVE demands money for (on top of subscription costs), Microsoft will reaffirm the evil corporation stereotype that the Xbox brand has done so much to negate. Let’s hope that Microsoft is smarter than that and shows its customers a bit more gratitude for their loyalty.

As much as Microsoft will swear up and down that they don’t force pricing on the publishers, here is yet another instance where a publisher says otherwise. Now, the good thing about M$ is that they will change something to free after a long while (unless it is Rock Band or GH related) but the money they charge for free maps or a little content is usually more than its worth (*caugh* Stranglehold, *caugh* Oblivion). Hopefully they work with Valve here and realize that less is more. Team Fortress 2 didn’t have many maps from the start and it would sure be awesome if we could add even more value to this amazing package. I’m just wondering if we will see some user content too from those who took the time with the PC mods. 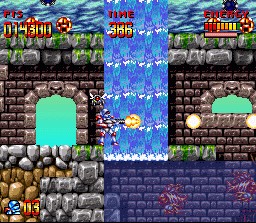 Back to one game releases for the VC and it isn’t even a very good one. Turrican you might be familiar with but chances are you haven’t heard of this one, you aren’t alone. The concept behind Turrican was that it was kinda like a lot of action games for its time. You beat a level and you would continue to the next one. However, in Turrican the object wasn’t just to beat that level but to fully explore it, uncovering secret spots, hidden rooms and invisible passages. In Super Turrican, the levels have been increased and this time you have a grappling arm similar to Bionic Commando where you could grab power ups and swing between platforms. It might be a decent ride, but it would appear money might be better spent elsewhere this week.

I mentioned last week that I needed some new console games to buy so I could keep my harmony between console and PC up. I think I’ve found them. Over the past week, I have purchased over Ebay, Rockband along with a microphone & usb hub. I already have two 360 compatible guitars and from Best Buy store experience really have no passion to drum it up. So, it will be me and my g/f acting like nuts as we hope to become an instant sensation and hopefully the cats won’t meow too much. The second game is coming 3/18. Rainbow Six Vegas 2. Yep, I played the first one a lot and the second one looks to continue the tradition of the Vegas strip. I found the idea of fighting in Casinos and all over the murky underground of Vegas a quite enticing one. I probably will play the old Vegas some this weekend to brush up as I prepare. I’m not any pro, but there was a point when I thought I was at least somewhat decent and could surprise some veterans. That is if Rock Band doesn’t sweep me & the girlfriend up into thinking we could be famous. We could, like Sonny & Cher; Whitney & Bobby, Brittany & Kevin. Hrmm, perhaps we will stick to being couch rock band stars. Until next time, have fun kiddoes & always remember to game safely. (That means to limit your use of nyquil & mountain dew at the same time, those 4am hangovers with a bad cold are brutal).

Michael Durr has been reviewing movies for the better part of fifteen years now. He primarily enjoys thrillers, sci-fi, animation and even a little courtroom drama. His favorite films include Escape from New York, the Goonies and anything with Alyssa Milano. When he’s not praising Kurt Russell as the greatest actor of our time or scratching his head over a David Lynch flick, he’s spending time at home in Texas with his lovely wife, Lori and his amazing son. How they put up with him is a mystery, but even Basil Rathbone doesn’t have the time to solve that one.
Tyler Perry’s House of Payne 101 Dalmatians (Platinum Edition)