Posted in: Dare to Play the Game, News and Opinions by Michael Durr on March 12th, 2008

Sex, Nudity and more things that we wish involved Morgan Webb but doesn’t – Welcome to the column that polled five hundred people about their bedroom gaming habits and realized that A)They have to change their sheets often and B)They have to install a bicycle pump by the bed known as Dare to Play the Game.

Welcome to another edition of Dare to Play the Game. World of Warcraft, I am up to 30 with my Troll Rogue. As mentioned, I also started a Dwarf Priest named Talloween on the Shadow Council server. He is currently level 10 and is a tough but fun character to play. I’m not used to the spell caster types and I have to adjust my playing style to compensate. I am exploring his professions of enchanting and tailoring which are quite the experience. I even took up fishing just to make it a totally different character for me. Of course on the 2nd fish pull, I got a mana potion. I’m surprised it wasn’t a boot or an old tire. My girlfriend is helping me a lot with this character which is good. I’ve done all the leveling myself but she’s helped by sending me low level items to disenchant and linen cloth to help my tailoring skills. Plus it is something we can do together which is why I took up WoW in the first place. I like playing with her and sharing the time together. Sometimes it’s simply just asking how much to put something in the auction house for. Sometimes it’s a difficult quest. But we work well off each other and it’s very fortunate and nice to have.

We already knew Brits like buying video games more than music. Now it seems like playing video games more than doing each other. A survey from “bedroom specialist Sharps” polled 2,000 people in the UK about the most common activities in bed. What did the bedroom retailer find? Number one was sleeping, number two was talking. Three? That was watching TV. To see where gaming fell, hit the jump. It’s surprising!

*snore* *snore*, What? Sorry I didn’t catch that. Leave it to those crazy brits to admit they play more games than have sex in the ole bloody bed. Mebee, my bed is rare but only 1,2,5, & 10 are really ever done in my bed and some are more than others if you know what I mean (like a lot of reading). But I guess if I took my laptop under the sheets then I could add something else to the list (or at least more reading). However, due to my wonderful sources I have obtained the rest of the list and add a few more notables about what British people do in bed.

13.Dreaming about what it is like to delay Tea Time by one hour.
15.Soccer, one word….GOAAAAAAALLLLLLLL.
24.Making up rumors about the Royal Family
30.Fantasizing about Paul McCartney.
40.Fantasizing about John Lennon.
349. Fantasizing about Julian Lennon.
999. Brushing their teeth
1,000. Wondering how Dare to Play the Game comes up with those witty comments. (well at least we made the list)

GameCareerGuide has an interesting interview up with Steve Schnur, worldwide executive of music and marketing for Electronic Arts, on the interplay between games and pop music. Schnur contends that being part of a game soundtrack isn’t just one more stop on an upward career trajectory, but can (and has) launched careers:
Epic Records credits Madden 2003 as being instrumental in the breaking of Good Charlotte. Avril Lavigne was first introduced to European audiences through FIFA 2003. Fabolous was first introduced in America via NBA Live, and went on to sell over 2 million albums here. JET got their American iPod commercial based on exposure in Madden 2004. Avenged Sevenfold were an unsigned act when we featured them in Madden 2004. In the weeks following the game’s release, their independent album sold tens of thousands of copies without radio airplay, and they were signed to a major label soon after …


He goes on to list a ton of other examples. It would seem that it’s less about being on a video game soundtrack and more about being on a Madden soundtrack, but be that as it may – Schnur has an interesting perspective on one part of putting together great (and not-so-great) games.

Well at least we know who to blame for Good Charlotte and Avril Lavigne. Is Hannah Montana anywhere in there too? This article is also heavily slanted towards EA. Plenty of games have done this and are great starting grounds for artists looking to make a break in the biz. Of course they also run the risk of being over played and annoying the heck out of me. Point in fact; Rush’s Tom Sawyer. Once upon a time, I actually liked that song. For all of 3 to 6 months. Then the classic rock station decided it was the only Rush song they knew, my college friends played it all the beeping time, then they had to make it the intro music in All Pro Football 2k8. I can’t even play it in Rockband without wincing now. But for little known artists, it is a win win situation and hopefully more decent acts get involved in the process.

Grab your oxygen tanks, it’s time for some breathless news.
Lansing, Michigan television station WLNS reports on how online games, in particular the Xbox Live, have become a magnet for sexual predators.

Thursday night a woman identified only as Jennifer said that her two children (whose ages were also not listed) were playing a game on “X-Box Live” when they were “exposed to nude pictures sent from someone on the other end.”

Jennifer immediately turned off the system and then “called Xbox Live”, the faceless online service apparently told Jennifer there was “nothing they could do about it.”

Oh X-Box Live, you lie! We all know that you can block individual gamertags, report them for abuse and even set up parental controls to limit access online for children. Why would you lie to Jennifer X-Box Live? Why?

How much you want to bet they were up playing Uno rather late into the evening? Seriously, after I got my 200 achievement points, I stopped playing for this very reason. Every other game would be about pot smoking or some 12 year old mooning the other three folks because he lost. Always remember one thing about nudity via cam like Xbox Live Vision, it’s never the people you actually want to see naked. But seriously, it’s not Microsoft’s fault. They provide a service, they can’t hover over and see to that some person doesn’t drop their pants at a moment’s notice. Only because the 360 provided the image that the Mom has a reason to try and blame them.

What if this had happened on their pc, would they have called Earthlink or Road Runner? Or better yet, just call the Internet. Al Gore might have to take a break for five minutes since he can’t think of any global warming scams at the moment and help you out with your little problem. The parental controls are there for a reason and Microsoft does the best they can without seriously hindering the system. I’ll say it once, and I’ll say it again. Stop being a victim and stop complaining. You saw nudity, get over it. Chances are so did your husband or else you wouldn’t have those two kids in front of you. Not to mention, in one breath they are complaining about nudity and the other they are pushing their copy of Gears of War or another “M” rated violent game under the couch. But that’s another rant. 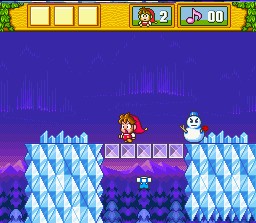 It’s import week at the ole VC barn. The first one was a sequel to the old Milon’s Secret Castle game on the NES. However instead of being based in a dark castle with many rooms, it was placed in seven themed worlds complete with world map. A few levels that to be completed in order with a good old fashioned boss at the end of each world. He can also finally jump on enemies but it only stuns them whereas they have to use a bubble if they want to capture them similar to the first game. Please note that this game will not be translated but should be down to earth enough for most people to get through provided they liked the original in the first place. 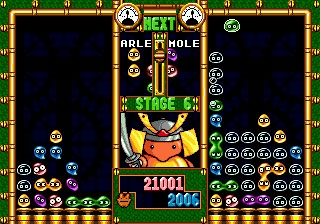 The original Puyo Puyo was actually translated into several North American Games like Dr. Robotnik’s Mean Bean Machine & Kirby’s Avalanche. The sequel was only released in Japan under the original title. It still involved Puyos falling from the top of the screen in pairs which can be moved left and right and rotated at will. However, new modes were added, mainly in the form of garbage handling. Garbage relating to what the opponent was doing to the player in order to keep them from winning. You could counter it and throw garbage of your own among other activities. An interesting week for sure, but not for everybody.

Welp, I got a few things for 360 this past week. First a couple of download cards of Worms & Ultimate Mortal Kombat 3 for Xbox Live Arcade. They were part of the buy 1, get 1 free deal at Target. Worms & UMK3 for $5 each? I’m in! I can’t wait to download these and try them out. In other news, I also got Rockband, game only. The girlfriend and I have already been treading the midnight oil playing this one. It’s a blast and is even more fun to play together than Guitar Hero three was. Furthermore, you can sing with your headset (but I do have a microphone on the way). So, needless to say we both tried out this feature. Well Sarah did the singing thing when I was cutting the lawn or off at work. But it’s great fun, seriously. I also already downloaded the Nine Inch Nails pack and several singles. Depending on the microphone, I actually might buy a mic stand since when I go to karaoke I tend to use one. It also just feels cooler. The funny thing is that we probably have spent more time customizing our individual characters than playing set lists. Another area where Rock Band just leapfrogs over Guitar Hero. But this one will stay in our queue a long time. It’s just kinda cool when you five star a song like In Bloom or Black Hole Sun. (or my sweetie 5 starring a Garbage song). Maybe we aren’t so tone deaf after all. Have fun kiddoes.

Michael Durr has been reviewing movies for the better part of fifteen years now. He primarily enjoys thrillers, sci-fi, animation and even a little courtroom drama. His favorite films include Escape from New York, the Goonies and anything with Alyssa Milano. When he’s not praising Kurt Russell as the greatest actor of our time or scratching his head over a David Lynch flick, he’s spending time at home in Texas with his lovely wife, Lori and his amazing son. How they put up with him is a mystery, but even Basil Rathbone doesn’t have the time to solve that one.
We Own the Night The Assassination of Jesse James by the Coward Robert Ford (HD DVD)