Posted in: Dare to Play the Game, News and Opinions by Michael Durr on March 19th, 2008

Multiple Games in MMO’s, No More Pro Gaming and Games are Pron – Welcome to the column that thinks Wussy and Nambi Pambi should be submitted as new ratings for the ESRB known as Dare to Play the Game.

Welcome to another edition of Dare to Play the Game. World of Warcraft, oh how I find thee to confound me. Up to 32 on the Troll Rogue, 12 on the Dwarf Priest. Lantanador, the Rogue is up to a pretty nice 125 gold and I still have purple pants. I make mention of this because my girlfriend Sarah torments me that I still have purple pants (which are a high teen level blue item). I do have new pants at 33, but until I hit that level, she will continue to poke fun at me for having noobie gear. As for my response besides “Ah, blow me” (We won’t get into the response to the response), it’s about stats I guess. I’m having a hard time finding something better. I don’t run a lot of instances (though I did go through a couple this past weekend), so I don’t get a lot of blues, especially ones appropriate to my level. Not much of an excuse, I know. The priest is excelling in tailoring and enchanting despite the questing being kept to a minimum. At a level 12, I’m making items that are in the neighborhood of level 15-16 items. At this pace, I’ll be well-prepared for later levels.

Games within a Game

GameSetWatch has an interesting column up on the evolving nature of WoW; the rules of contest are frequently ‘in play,’ so to speak, in most sports or games, so why would a MMORPG be any different? Patches and additions codify, so to speak, some of the player-created games, but there are plenty of ‘unsanctioned’ game making that goes on:


In fact, most people play a combination of four or five games in World of Warcraft. There’s the leveling up game, which almost everyone plays ….
After this game, some people play the endgame game, in which they try to fill out their character with the best items, or the other endgame game, in which they try to beat all the raid bosses. Some people play the Honor System game, where they try to amass honor points, and others play the Arena game, where they get to the top rank in any given season. Then, there are the less popular games – or the one I just made up: going from one capital city to another as quickly as possible at level one.


Half Blizzard driven, half player driven – so Warcraft turns. It’s a nice little look at games-within-games and how these things take on a life of their own.

That has to be one of the main appeals of World of Warcraft. You really can play a dozen roles and we just don’t mean different classes like rogue and paladin either. It’s the game within the game that keeps us coming back. I thought I would take the time to list some of the different games that I have encountered while playing World of Warcraft. See if you can spot your favorites.

Color Coordination Game – usually played by females. An attempt (and usually a bizarre one) to match your outfit exactly. This can even go so far as for certain holidays and even worse occasions: certain pets if they happen to be a hunter.

Chuck Norris Game – the ability to yell out a quick Chuck Norris quote in the trade channel at the speed of light. Points are given for originality or the mention of warcraft appropriate feats. This is usually preceded by chants of “OMFG, you are so lame”.

Taunting Noobies Game – also performed in the chat channels where a random person will ask a question that is deemed simple by others. The others then see how far they can insult that person before they start crying and cancel their subscription. Cause who else except a noob would have their main character at only level 32.

Guild Bank Game – seeing how quickly you can fill up a guild bank with useless junk and under level 15 items before a “guild meeting” is called to discuss what not to put in the guild bank.

Annoying Twink Game – learning how to spend oodles of money to get a ridiculous +5 stamina enchant to level 19 boots so you can pretend that you can “pwn” a level 30 properly equipped spellcaster in a duel. Not to be confused with the “looking for premades” or “I will give you xx gold for a runthrough ‘insert low level instance here’ ” games.

The Cyberathlete Professional League has become the latest pro-gaming operation to close its doors. The organization announced that it had ceased operations on March 13, canceling all currently schedule events. The official statement cites “the current fragmentation of the sport, a crowded field of competing leagues, and the current economic climate” as responsible for the CPL suspending operations. General ennui was not mentioned as a factor.


The World Series of Video Games, which shut down in September of last year, similarly pointed to a “very crowded field of competitive gaming leagues.” The CPL, established in 1997, noted that it “intends to continue to pay the 2007 World Tour prizes.”

In $2.95 a month installments for the next 300 to 400 years. On a serious note, a few years ago we were seeing the rise of such gaming groups and it was thought for a while that gaming would be seen as a legitimate sport. Even though I am way past my prime (not that I had one particularly), I remember days when I dreamed of playing video games for cash and prizes. The women in skimpy outfits and the trophy as big as my body. But after watching a few of these tournaments on my hi def gaming channel, I realized it’s not really a spectator sport. That unfortunately is why it is a hard sell. The average consumer or more importantly the average sponsor isn’t going to put their product out there to shill when there isn’t a real market for it. Sure it’s awesome if you can game at such a high level, there is some real talent there. But most people have their fist up their posterior and could care less. Hopefully that changes.


“Is it going to be an uphill battle? Sure. But it’s absolutely a battle that the mayor feels he should take on.”


Similar bills have come and gone in Louisiana and Utah, so I doubt this one will be any more successful. I almost wish that a state would actually pass one of these, if only to prove that it won’t do anything to help curb youth violence. 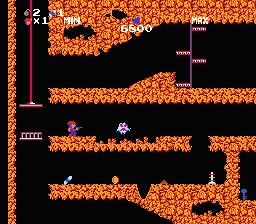 An oldie but goodie platforming title. The NES version made its way to our shores in 1987. The game was set in a huge cave where you started at the top and you had to work your way to get the treasure at the very bottom. In order to do this you had to go through difficult areas walking and jumping with a limited supply of air to the deed. There was many hazards and many considered the game unfair due to the jumping mechanism which required the player to move sideways prior to the actual jump. For Hardcore platform gamers only. 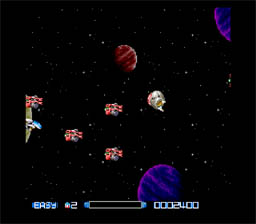 So it must be the week of really freaking hard games. Super R-Type isn’t any better and suffered from mass slowdown which was evident in a lot of SNES launch games. This would happen when the game would lure you into a false sense of I can do this s–t. Enemies would come along at normal speed and then suddenly the game would switch into full speed and then boom, into a hazard or oncoming ship you would go. Then you get to go to the beginning of the stage all over again. Gorgeous game, but its difficulty hindered it. If I had to pick one of these terribly hard games, I would go with Spelunker this week. But be prepared for a very tough road.

I finished the guitar portion of Rock Band on medium. You knew it wasn’t going to last long. I’ve been actually spending more time on the vocal portion on easy. Yeah I know, easy. However, I’ve never played a karaoke game before, only sang in crappy bars. I’m kinda learning it all over again at times and feeling like a pro in others. Mainly I’m having to sing a lot of songs I simply don’t know or not even aware what pitch they are in. I mean I guess I could download the songs or find a way to listen to them so I could ace them but giving it the ole government try is so much more fun. Even if people’s ears start to pound and pump blood. Anyway, I find the tiers to be completely off for singing. What might be hard for one person, is ridiculously easy for another. I tend to do well at 80’s and 90’s hard rock type tunes. For example, Bon Jovi or Metallica or even a little Faith No More (which I was rough the first couple of times but I am getting better). However, I flat out suck at anything fast and thrashy. Or a pop tune they just kinda stuck in there. So it’s a crapshoot and somebody else might be completely opposite. But I’m having a lot of fun with it and that is what’s important. So have fun kiddoes and I will be back next week.

Michael Durr has been reviewing movies for the better part of fifteen years now. He primarily enjoys thrillers, sci-fi, animation and even a little courtroom drama. His favorite films include Escape from New York, the Goonies and anything with Alyssa Milano. When he’s not praising Kurt Russell as the greatest actor of our time or scratching his head over a David Lynch flick, he’s spending time at home in Texas with his lovely wife, Lori and his amazing son. How they put up with him is a mystery, but even Basil Rathbone doesn’t have the time to solve that one.
No Reservations (HD DVD) Stargate – The Ark of Truth