Posted in: Dare to Play the Game, News and Opinions by Michael Durr on March 26th, 2008

Rainbow Six Vegas 2 bugs, No Waggle in the Rock Band Wii and Powerball action – Welcome to the column that keeps scratching even when it should have stopped a long time ago known as Dare to Play the Game.

Welcome to another edition of Dare to Play the Game. Yes it’s World of Warcraft corner with your host, IAMMurloc. Or rather Kedrix (I know Sarah would appreciate that). Up to 33 on my Troll Rogue, 14 on my Dwarf Priest. I’m not sure what I did for most of the week with my characters to be honest. (Because I was going back and forth between WoW and Rainbow Six Vegas 2) But my highlight actually happened when the patch 2.4 hit. More importantly it hit the status of an item I had been holding in my bank for merely cosmetic purposes. Bloody Brass Knuckles which is actually a white item and to be honest, nothing more than “Oooooo, cool”. It drops off Vishas in Scarlet Monastery. It’s been changed to a superior item or more importantly, a blue with stats. The DPS has increased significantly (making it better than my sword I have currently equipped) and adding a whopping +8 strength. Let the bludgeoning commence!

Yeah, broken. Shame. Seems anyone who owns the PS3 version of the game and wants to play online is shit outta luck, with widespread reports flooding into our poor, beleaguered tips box all weekend of problems associated with the game’s multiplayer. Chief amongst these is just finding someone to play against, with most users complaining of an inability to connect to servers for a game, though those who can connect aren’t out of the woods, with a number of glitches and bugs during online play reported. All in all a big fat mess, really. Ubisoft are aware of the problems, and are asking anyone affected to hit up the game’s forums and complain officially and in detail, as “this information will be invaluable in working out and addressing the issues you are experiencing”.

Don’t worry, 360 owners, when Ubisoft dropped the ball on the PS3 version of Rainbow Six Vegas 2, they didn’t forget about you, either. While the 360’s problems aren’t as dramatic as the online shambles currently affecting the PS3 iteration, it’s still littered with bugs and glitches, the most annoying of which are stat-tracking issues and a gamerscore hiccup that prevents anyone who’s carried their data over from the first RSV game from earning some early achievements. As with the PS3 version, 360 owners experiencing issues are asked to complain officially (but politely!) on the game’s forum.

Tsk, tsk. While Rainbow Six Vegas 2 snuck up on many of us as it is, this is very much disturbing. Especially to the PS3 crowd. Online play, non-existent. Most of us understand in this day and age when new games ship, there will be bugs. We even come to expect it. However, there are minor glitches and ridiculous bugs. The above is ridiculous bugs. Ubisoft should have looked more into the online bug for PS3 users and tested that thoroughly before release. The achievement bug for 360 I have personally experienced as a former RSV1 player. Let me tell ya, I wasn’t happy. I’m sure somebody can email me and go but you just don’t understand we have to meet release dates yadda yadda. I do understand, I have to meet deadline dates as well in my line of work. But let me also mention that I can’t remember an instance where I simply forgot to setup something that caused the person to not be able to work correctly. While the game is an excellent one, they should have got more of these issues out of the way. Expect a review from me later this week.

Going off naught but anecdotal evidence, it’s easy to see why Midway CEO David Zucker was binned (as if he actually “resigned”) earlier this week. Guy didn’t do a very good job, and leaves Midway in worse shape than when he came in. But that’s just a general assumption: it’s a lot more fun to look at some numbers showing just how shitty the company have become since 2004, when Sumner Redstone bought a majority stake in the company (which ties in nicely with Zucker’s tenure, which began in 2003):


All paint a bleak picture, but me, I think Zucker’s fate was sealed the day somebody at Midway saw Cruis’n on the Wii and said “yes, brilliant, let’s release this”.

It is a marvel that Midway is still even in business. The sad part is that this CEO probably left with a good chunk of change. Millions. He’s sitting in some fat house, counting his money and wondering where is the next country he can get his 4th wife in. I might be a bit over the top I guess. I’m actually more concerned about future releases. TNA Impact most importantly. This title from Midway was to hit stores around the middle of this year. It’s heavy into development last time I checked and should be fine but you never know if this kind of thing could delay shipment or put it on the back burner for a while. I’ve actually put off buying Smackdown vs Raw 2008 because I think this has a chance to be superior. We shall see. *fingers crossed*

Few more bits of info regarding the freshly-announced Wii version of Rock Band, courtesy of Harmonix. First is that the game’s almost a straight-up port of the PS2 version, so don’t expect any Wii Remote-specific treats like you got in Guitar Hero. And while we’re on the subject of Guitar Hero, Harmonix have also said that the Wii’s Guitar Hero controller won’t – as you’ve probably guessed by now – work with the Wii’s Rock Band. As with the PS3 version, they’re instructing all upset gamers to go right ahead and blame Activision.

Good news: RockBand is coming out to the Wii in May of this year. Many people will snatch it up. Harmonix will make mucho money and buy fancy cars. Bad news: Everything else about the release. 1)It’s yet another Wii game ported from the PS2. I love my PS2, seriously. But why can’t developers get it through their head that the Wii does not equal PS2 with a fancy controller. 2)No GH3 Guitar Support. This is just ridiculous, forcing people to rebuy peripherals when it works the same exact way (I’m so glad I have the 360 version, you have no idea). And don’t believe the 5 special buttons on the fretboard crap either. 3)No Download support ala no DLC. This is the sole reason that Rockband kicks so much butt on the 360 console. New songs every freaking week (and albums too if they ever get around to it). I can browse and preview songs and spend my points until my heart’s content. Without it, Rockband becomes a game that people will be rather hesitant to spend the $169 for. At least those who are properly informed. 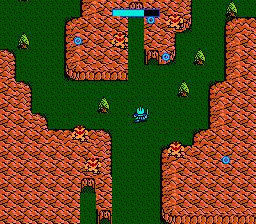 Squaresoft’s first Action RPG in North America. Cool beans. Well it isn’t exactly an Action RPG, it’s a common misconception. It’s more of a vertical shooter with fantasy and RPG elements. Like many efforts back then, you were saving a princess. In this one, you could choose from 4 different characters including a Knight, Wizard, Monster, and a Thief. You collected various level ups in order to accomplish this with certain classes having advantages over one another. The thief got speed, the monster got shield, etc. It was an interesting game and kinda historic because it showed where Squaresoft was going in the future even if the game wasn’t a real RPG. 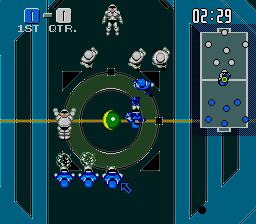 One of my top 5 favorite games on the Genesis, seriously. (Mutant League Football, Phantasy Star II, IV and Gain Ground probably for the others). This effort kinda threw together soccer, rugby, football and received inspiration from other games like Cyberball and Speedball. The teams represented various countries like Japan, USA and Germany with stats based on style of play. USA was kinda of an all around team, Germany powerhouse and France was super fast if I remember correctly. As you advanced in the game, you collected points that you could use to upgrade your players. Hard hitting action, super fun. My best suggestion, level up your sweeper and give him as much speed and durability as possible. He will be able to move the entire length of the field and go virtually untouched before passing it off to a center or wing man. If you like futuristic sports games, you will love this.

My friends, I am a tool of Rainbow Six Vegas 2. *sigh*. Bought it on Thursday at Fry’s. Last copy. Not kidding, was available at 5:00pm on Thursday and I get there at 5:04. Luck was on my side I suppose. It is a very good game. I don’t want to spoil too much as I have a review to write this week but the A.C.E.S. system and the melding of single and multiplayer experience is something I’ve been hoping for in any first person shooter for a long time. If I want to play with friends, awesome, if I don’t because of a slow connection or just don’t feel like it, that’s cool too. So needed, it’s not funny. I just hope they fix some of the bugs and glitches that myself and others have seen so far. My other accomplishment of the week is a long overdue one. I finished Halo 3 single player. But I can’t take credit for it without giving thanks to the person that helped me. If it wasn’t for him, there is no effing way I would have been able to navigate through level eight and most likely no way I would have gotten through the driving (or riding in my case) of level nine. So in this column, I extend a hearty thank you to Cronatika. Take care dude and if I can ever help you in some other game, I got your back. Have fun kiddoes.

Michael Durr has been reviewing movies for the better part of fifteen years now. He primarily enjoys thrillers, sci-fi, animation and even a little courtroom drama. His favorite films include Escape from New York, the Goonies and anything with Alyssa Milano. When he’s not praising Kurt Russell as the greatest actor of our time or scratching his head over a David Lynch flick, he’s spending time at home in Texas with his lovely wife, Lori and his amazing son. How they put up with him is a mystery, but even Basil Rathbone doesn’t have the time to solve that one.
Pauly Shore’s Natural Born Komics Sketch Comedy Movie: Miami Rainbow Six Vegas 2 (Xbox 360)