Posted in: Dare to Play the Game, News and Opinions by Michael Durr on April 9th, 2008

Welcome to another edition of Dare to Play the Game. More and more levels we go, where it stops? Nobod…err probably in the 50’s to low 60’s. The dwarf priest has moved up to 18 with some nifty gear while the troll rogue in World of Warcraft has hit level 35. My dwarf priest played through dead mines and received a very nice blue staff in the process. Tailoring and Enchanting are also maxed out until I hit level 20. The troll rogue is currently in the third leg of the Barbaric (Horde only) blacksmithing quest chain. A whole lot of iron is being mined wherever I can find it. However, I am up to mithril which is nice for all of those nodes that I had to pass up prior. Now, what exactly to do with the mithfril ore once I get it is in question for the time being (yes, I know I will eventually use it); but it is nice to see my professions expanding on my rogue again. Hopefully I hit 200 in mining and blacksmithing soon. I got to make a decent sword for myself one of these days.

I completely forgot about Unreal Tournament III. Sorry, Epic! No harm meant, it’s just, I think the world’s FPS games/fans have kinda moved on from the late 90s. That and there wasn’t a 360 version, which for an online console FPS is like holding a doritos-eating championship then forgetting to invite the fatties. While many then went and assumed the “delayed” 360 version would quietly become the “cancelled” 360 version – due to Microsoft’s reluctance to allow user-generated content on the 360 – Epic are still plugging away on the project, with Mark Rein posting on the company forums that the title will be playable for the press in about two weeks time. Gotta admire their sticktoitiveness.

I vaguely remember a brief mention about UT3 on 360. Something to the effect of we aren’t releasing it until we figure the whole DLC situation. The people at Epic want to be able to release free content that is spawned from the users playing the game. They have done some pretty cool things so far like create a Master Chief or Mario esque Unreal character to use in the game. They also create levels to use within the game which evidently Microsoft has this whole we want to charge you for DLC even though Epic would rather just make money from the game not extra content. They don’t even trust user generated content as the article suggests. As this might stand as the first FPS that my girlfriend will play on the 360 (she has played previous Unreals), I hope they work this sucker out as soon as possible. Then perhaps this will open the way for future games to use that ever coveted user generated content.

Poor Uwe Boll. Beat up some game nerds and making some shitty movies and suddenly everyone hates your guts. What gives?! Some folks dislike Uwe so much that they’ve created an online petition hoping to do what online petitions typically do: Nothing. That, or convince Dr. Boll to stop making crappy movies. Ha! From an interview with website FEARnet:


Are you aware that there is a petition online, signed by 18,000 people, requesting that you stop making movies?
Yeah, I know that. 18,000 is not enough to convince me.


How many would it take?
One million. Now we have a new goal.


If Uwe Boll did not exist, someone would have to invent him.

The petition can be found at http://www.petitiononline.com/RRH53888/petition.html. At the time of this column, it is up to a staggering 121,000. Quite a different story from a measly 18,000. I don’t expect it to make a million. At least any time soon. I think it will hit 200,000 no problem. However, somewhere at that point it will lose steam and people will forget to care. Personally, I could care less. Does Uwe Boll make good movies? Heck no. Should he stop making films? As long as people continue to pay him for his efforts, sure why not? Not like somebody else is going to make a BloodRayne film or a Postal film. At least those suckers exist. The people who should be stopped are the people behind the Date Movie, Epic Movie, Meet the Spartans movies. They are ruining the spoof genre (so that ones like SuperHero Movie which aren’t half bad can be ignored). I would gladly sign a petition if they would just commit suicide here and now. I miss the times when Mel Brooks actively made movies. I miss the times more when those films were good. *sigh*

GTA IV in the House!

Rob Taylor, deputy editor of Xbox World 360 magazine, is the first games writer to finish Grand Theft Auto IV (Crecente is … well, he’s hurt by this. You probably shouldn’t mention it when he gets back on Monday.) He was among a group of writers who got to play at Rockstar’s offices in Chelsea, London, and was the first to get through it. GamesRadar UK has a talk with Rob about what he saw and learned — helpfully edited to remove spoilers (right down to asterisking a mission title).


Tidbits after the jump:

• He completed the game in 25 hours of playing time. It doesn’t sound like he 100 percented it, so this is probably a mission-only completion.

• Rob anticipates that, playing at a normal pace, you’ll get 40 hours of gaming out of the missions, plus another 25 for the side missions. Others have speculated at close to 100 hours total. Whatever, it’s going to be a lot.

• The missions get rather difficult at the end. “The final couple of missions are a rock,” he says. (Not sure if anyone feels the same way, but I thought the closing missions of San Andreas were almost too easy — and I wasn’t using a walkthrough. Vice City however was insanely difficult at the end. Wonder if this will be a blend.)

A story mode that lasts 40 hours (for the average person) isn’t too bad these days. Especially when a lot of shooters clock in the sub 10 levels. Personally I never have finished a GTA game story wise. I’ll finish Taxi Missions, Rampages, Wicked Jumps, and of course Vigilante. But story mode, maybe half to 3/4’s through. I get bored, and then I suddenly feel like driving down a road, running over 15 random folks, and then working up my wanted level to where I get shot down in a blaze of glory. That aside, this should be a heck of a game and fodder for many many nights of sleeplessness. As long as they did change the shotgun, I’ll be good to go. Lock and Load bitches! 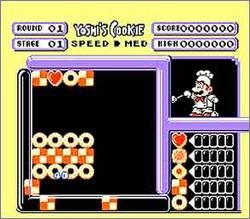 Oooo, look a Mario puzzle spin-off. Look Dr. Mario called and he wants his addictive gameplay back. You mixed and matched cookies. You controlled a cursor which could be used to slide rows of a single square of cookies in a style similar to Rubik’s Cube. Okay, I sucked at the Rubik’s Cube. I was the kid who took off the stickers to make it work correctly. Somehow, I don’t think that option is available in the digital version. Besides I don’t need to toss my cookies and play a puzzle game with a Yoshi with a bigger head and shorter neck, it’s gruesome. Trust me. 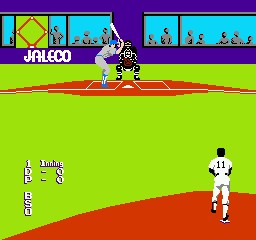 Generic baseball FTW! Actually this was the first really good realistic baseball game. Sure we had Baseball Simulator, Baseball Stars, even RBI Baseball, but Bases Loaded; yeah you had to actually figure out a sound strategy. 12 fictitious teams were included from Kansas to my favorite Philly with the awesome cleanup hitter Oko. Besides being about as true to life as you
could in those days, it also had the feature of being able to provoke one hitter to charge the mound. Personally I was hoping for a feature where I could get juiced or for those who are throwbacks, a little sandpaper on the ball action. I miss Gaylord Perry and Phil Niekro.

I always feel like Jerry Springer in this final paragraph, I have no idea why. I have played a little more Rainbow Six Vegas 2 but I’m finding my attention despite the much better interface to be waning a little bit. I guess the reason behind that was that my friends more heavily played the first one and now a lot of them are stuck on Call of Duty 4 and only play this title at off times. So actually I’ve already played about 200% more on the story mode by myself. I hope I can crack open perhaps World Series of Poker 2008 or one of the two XBLA titles I have (Ultimate Mortal Kombat 3 or Worms) on download card. This is going to sound weird, but the greatest enjoyment I have gaming right now is with my girlfriend. Whether it would be Rockband, Marvel Ultimate Alliance (which we need to start playing again) or simply watching each other play WoW, that’s all I seem to need. Sure, I have a library that is probably 500+ games among 9-10 different systems. But it’s the fact I found my heart and soul in a little gaming girl that means the world to me. I love you Sarah and thank you kiddoes for reading my column this week.

Michael Durr has been reviewing movies for the better part of fifteen years now. He primarily enjoys thrillers, sci-fi, animation and even a little courtroom drama. His favorite films include Escape from New York, the Goonies and anything with Alyssa Milano. When he’s not praising Kurt Russell as the greatest actor of our time or scratching his head over a David Lynch flick, he’s spending time at home in Texas with his lovely wife, Lori and his amazing son. How they put up with him is a mystery, but even Basil Rathbone doesn’t have the time to solve that one.
There Will Be Blood (Special Collector’s Edition) The Insatiable