Posted in: Dare to Play the Game, News and Opinions by Michael Durr on April 23rd, 2008

Modding in trouble, Game Making on the Cheap & Who exactly is buying Wii Games? – Welcome to the column that will not purchase a Wii game until they make a sequel to River City Ransom known as Dare to Play the Game.

Welcome to another edition of Dare to Play the Game. 37&20. I find it easy to update that particular number than sit here and tell you how I did in World of Warcraft. After getting the Priest to 20, I find myself focusing primarily on the Rogue for the duration of the week. I feel the push to 40 and I’m trying desperately to get Undercity Rep despite the fact I’m a Troll. Getting to Revered was easy enough (did all of the quests in the Silverpine Forest) and I’m back at Tarren Mill. Once I finish off the quests there though, I will be roughly 10k rep away from Exalted. I honestly have no clue of where to go next for Undercity rep. Online guides don’t leave much clue either unless you want to collect cloth or do PVP. Origmaar rep is easy (where I’m also revered), Stranglethorn Vale or Hammerfall fills that gap easily for my level. But leave to me to want a stupid undead horse for my mount rather than a Raptor (Troll) or a Wolf (Origmaar). I never can be normal.

Grand Theft Auto creator and Crackdown mastermind David Jones points out the obvious: Games are pricey to make! New IPs have gotten so expensive that they’re quickly approaching US$50 million plus! Here’s the quote:


Crackdown wasn’t that long ago and our development budget was something like USD 50 million, and even that to me now, I don’t know if I could do anything for much less than that.


He’s probably not alone. Think about it: Fifty million bucks to make a game. That used to be a lot for a Hollywood movie — even with big star salaries, special effects, deluxe trailers and all that crap.

Wow, to think that a blockbuster game costs that much makes you realize that $60 for a new game isn’t so bad. Okay, it still is. But games are big business. When something like Halo 3 brings in #’s that are usually reserved for a summer movie extravaganza, fifty million is probably a solid investment. Of course, we also know that quality gaming can be made for a lot less than 50 million. Solid games like No More Heroes, Puzzle Quest, or even Portal did not take fifty million to make and sold plenty of copies. Of course, you can also spend less and get something less than savory. Just think of all the Wii shovelware (the $20-$30 titles)out there, they probably spent a whole $30, $40….dollars in development. I think I spent more time and effort constructing my first set of Wolfeinstein 3d levels back in the day (and they worked for Blake Stone too!).

Interesting story out of New Zealand. Modder Stacy O’Callaghan, “sick of all this American rubbish” in the GTA franchise, set about modding his PC version (doesn’t say which) to include official New Zealand police insignia on the cops and the cop cars.

Now here’s a familiar story, modder cooks up something and gets in legal trouble, although it’s usually from the software publisher. In this case, “unauthorised use of a police uniform” is an offense under New Zealand’s Police Act. And even though it’s unclear whether this really fits the definition of that offense, the cops are looking at their options. A cop spokesman said the police are looking into the matter.

Honestly, what the fuck is it with Australasia and Grand Theft Auto? I’ll just leave it at that. I’ve never been to either Australia or New Zealand, but crikey, their collective pants-wetting over American video games, this series in particular, makes them look like the schoolmarms of western democracy.

I tackle a lot of these modding stories because they interest me heavily being the creative person I am. (How else do you think I crank out witty comments and phrases ever week?, Don’t answer that) Some person with more intelligence than myself took the time to create a different set of cops in Grand Theft Auto complete with a few artistic touches. My guess is that he didn’t keep it at home and then distributed it over the net to other GTA PC owners. New Zealand PD gets pissed, he gets in possible trouble. If the PD really pursues this, this sucker will only get more popular. Personally I like the idea of editing GTA. Almost makes me want to grab a PC GTA game (whichever one he used) and give it a shot. But I want to go further. Have the cops look like Ronald McDonald & his gang and the cars look like flower power vans from the 70’s. You want to talk about some scary stuff going down, get your wanted level up to 2 and 3 stars and start seeing Grimace coming down the street with an Uzi. That’s the stuff nightmares are made out of. At least mine anyway.

According to a well-argued piece by the New York Times, Wii owners don’t buy games. They look at the issue from a variety of angles, including the facts (Wii owners buy one game less per year than their 360/PS3 counterparts), the analysts (Michael Pachter explains this represents a “broadening of the demographic”) and the consequences (Super Smash Bros. Brawl sales dropped 90% over the first four weeks, forcing companies like Walmart to turn to bundling the game).

All in all, it’s a good thing that Nintendo makes loads of cash on the Wii, Wii controllers and accessories for Wii controllers. Because even their traditional franchises are failing to inspire many of those who purchased Wiis in the first place.

Sure they can sell systems, but actual games perhaps not. But what you won’t find in most articles is the real reason why. It actually isn’t because of shovelware (though it certainly exists) or lack of good games (there are actually quite a few). The attachment rate stinks because of who is buying the system. It isn’t because of people like my bud Teedub who probably owns 10 times the attachment rate (which last I heard was an anemic 1 or 2 games per person). He represents the hard core group which is a very small percentage of Wii users.

Most of the people who buy the Wii are your soccer moms, your celebrities, people who think (and probably aren’t) they are cool. They buy the system which has Wii Play and maybe one more game like Zelda TP or Super Mario Galaxy and that’s it. They play it for about 6 months and then it either sits there or gets thrown into a closet. Great games like Super Smash Bros are bought up by the hardcore crowd in the first couple of weeks and are never heard from again. I really think in due time that we will see Gamestops and garage sales overflowing with Wiis but not cause it is a bad system. It will come from people treating it like one of those joysticks you see in Walmart for $20 that comes with 7 games inside. This one just happens to cost $249. 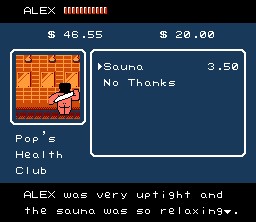 One word sentence for this week, if you own a Nintendo or the Wii with Virtual Console, go get this game. I don’t need to tell you about how awesome of a fighting game this is or how it is the single best game to combine double dragon with true rpg concepts ever. I can go on record and say that I have beat this game and you aren’t a real River City Ransom aficionado until you know the real reason you take the Saunas at Pop’s Health Club. Many people never knew this game to exist and I’m honestly surprised it took this long to show up on Virtual Console. It is also on Game Boy Advance. Out of curiosity though, has anybody played the GBA version of this? Is it any good? 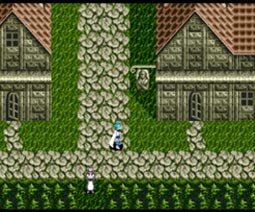 The grand B of Phantasy Star games. The one Phantasy Star game most people would like to forget. It’s not that bad and has an okay story. Basically you play Rhys, a crown prince who due to certain events has to choose whether to marry Maia, princess of Cille, a rival kingdom or Lena, a princess of Satera who was Rhys arranged marriage partner at birth. With this decision the game goes in a different direction and spans across different generations. However, the game was criticized due to the lack of character development and that the choices you make really don’t make a strong impact on the end game events. Having played through a good portion of it, it’s not bad. It is the weakest of the series but that is like saying Super Mario Bros 2 is the weakest of the Super Mario series. Still a darn good game (I don’t care what the rest of you think, I liked it), but certainly had its draw backs.

As explained last week, in console gaming I’ve gone retro for the time being. With Zelda: Link to the Past and Legend of the Mystical Ninja for SNES in my grasp, I turned my focus to Super Metroid. It should be at my house anyday now after winning it in an Ebay auction. I also got a mini deal of Ninja Gaiden 2 for the original NES thrown in due to my observant eye of completed auctions. I’ll suck at it, but it’s Ninja Gaiden for pete’s sake! I also happened to travel to Marshall, Tx last week and stopped at the local gamestop. I scored Metal Slug Anthology for PS2 at under $20. After playing Metal Slug 3 on XBLA at a friends on the previous week, I found this to be an easy purchase.

Also, while in Marshall, I picked up a book to read. Yes a book, I can read. (sure this comes as a surprise to some).The name of the book; Doom 3: Worlds on Fire by Matthew Costello. I know you might be laughing but it is not bad. It is based on the Xbox game (who was also scripted by Costello) and I actually found it to be quite good, I’d give it a solid 7 out of 10. It is intended to be horror based, but only gets in that direction for the last 50 pages. Hopefully future Doom 3 novels flesh out the cast of characters. It certainly makes me want to break out my Doom 3 game if nothing else. So grab a book this week whether it be a book based on your favorite game or a classic from yesteryear like Tom Sawyer. Or perhaps a cookbook for your favorite recipe and then walk towards your spouse with cookbook in hand and proclaim to them, “Woman get into the kitchen and make me a pie”. Be sure to duck from oncoming pots and pans and always remember that cast iron hurts. A lot. Have fun kiddoes.

Michael Durr has been reviewing movies for the better part of fifteen years now. He primarily enjoys thrillers, sci-fi, animation and even a little courtroom drama. His favorite films include Escape from New York, the Goonies and anything with Alyssa Milano. When he’s not praising Kurt Russell as the greatest actor of our time or scratching his head over a David Lynch flick, he’s spending time at home in Texas with his lovely wife, Lori and his amazing son. How they put up with him is a mystery, but even Basil Rathbone doesn’t have the time to solve that one.
Matlock – The First Season Married with Children: The Complete Eighth Season