Posted in: Dare to Play the Game, News and Opinions by Michael Durr on June 11th, 2008

LucasArts putting on the halter, Wii wanting to go steady with HDD, and Blu-Ray & Xbox 360 tying the knot? – Welcome to the column that got married once but forgot to read the fine print about descending into the pits of hell known as Dare to Play the Game.

Welcome to another edition of Dare to Play the Game. So at some point last week, you were probably wondering where the heck is your favorite video game columnist. The truth is I don’t know where Adam Sessler is and he won’t return my messages (something about me and Morgan sitting in a tree). As for me, I was in Las Vegas, Nevada. Internet for tourists in Las Vegas, NV sucks. Why is that? Because they charge, $13.99 a freaking day. My conference did have it for free, but it moved like a 300 baud modem. (For the kids at home, that is like your dad asking you to walk to the liquor store on the other side of the county line and back with a bottle of JD stopping for every hobo that asks for a sip). So there was no decent way I could have got a column out last week. I wanted to, but alas the internet connection (not to be confused with vegas showgirls) wouldn’t let me. But I am back, somewhat refreshed and ready to provide a winning column to you. Okay, 1 out of 3 ain’t bad. I really should get a secretary for these things.

You’ve heard the rumor: Microsoft will be announcing a Blu-ray Xbox 360 on Monday morning at 10am KT (Kotaku Time). Apparently Microsoft is gunning to upstage the Apple Worldwide Developers Conference. Check out what Microsoft Entertainment & Devices Division President Robbie Back has to say about that rumor:


Our plan continues to focus on high-definition experiences. Xbox 360 has a great ability to deliver those through the Xbox Live (online download) service. It’s a great way to get the high-definition concept because it’s right there. There’s no additional media. There is nothing you need to purchase.

If you look at the Blu-ray player market, you haven’t seen the acceleration everybody expected (since the demise of HD DVD). It’s not as much about whether all the content is in a Blu-ray format or a HD DVD format. You have to look at how fundamentally compelling the difference is between a progressive scan DVD player and the picture that it can produce and what you get on a high-definition player. The reality is there is some difference, but most people look at it and say, “I am not going to pay extra for that.”

There is nothing to even talk about [Blu-ray Xbox 360 plans] right now with regard to the next generation. That is so far out that there isn’t anything to talk about.


Also in the interview, Bach states that there is “no real projection” on when the next Xbox iteration will be introduced. While adding that the company is always thinking about the future versions, Microsoft simply doesn’t have anything to discuss at the moment. “The last generation for the Xbox was a little short because we entered the market a little bit later in the cycle,” says Bach. “I suspect this time the cycle will be a little bit longer for us.”

Blu-Ray & Xbox 360 will not exist and here is why. Money. Sony would charge Xbox a truckload of cash to be able to integrate their current setup with the format. Or at least enough to make it unprofitable. So until Microsoft figures a way around this (probably next console), we will continue to see them skate around this issue. I really don’t think they need it for the current console. DVD is just fine, and trust me, you don’t want to see the add-on Blu-Ray player for a 360. The HD-DVD one was ok, but looked like an old apple 2c floppy drive with a power supply to match. I also like the idea that the next Xbox isn’t really in the current thought processes of the execs which means we’ll keep the 360 for another couple of years at least. I’ve never been in favor of a new console coming out every 3 years because they just want to beef up the hardware. Give it time kids, the 360 might be a beast, but it is a very good and well played with beast. Besides, I don’t even want to think what will happen to my Rockband DLC by that time. Or any other of the couple dozen plus XBLA games I have sitting on my 360.

Shacknews is reporting, via “a reliable source,” that once Star Wars: The Force Unleashed drops in mid-September, LucasArts will pinkslip another 100 employees and quit internal development.

Force Unleashed is the first internally developed 360 and PS3 title for LA, and the first LA-developed title since Republic Commando for the Xbox in 2005. There is, as Yoda might say, another …

That would be the untitled Indiana Jones third-person actioner, and according to Shacknews, the remainder of its work, left after The Force Unleashed hits the street, will be outsourced. Shacknews notes that past and present development partners include TT Games, Day 1, BioWare, Pandemic and, reaching way back, Totally Games (X-Wing, TIE Fighter).

In case you missed it: last week, Lucasarts fired a bunch of people. Then rumors popped up that Lucasarts would fire even more people. So many, in fact, that they’d cease internal development altogether. Well, we can discount that one (for now). If you remember, Lucasarts told us last week they were “definitely committed to the internal studio”, and re-affirmed that yesterday, explaining that work on the non-Lego Indiana Jones title was being done in-house. No comment on whether they’d continue internal development beyond that game, but since it’s a whiles off, we can cross that bridge when we get to it.

LucasArts has a very rich history and to think it all started with Maniac Mansion and SCUMM. I have many fond memories including Sam & Max and the Day of the Tentacle. Of course as time passed, I easily found myself able to pick up the Knights of the Old Republics or Lego Star Wars. Except those two titles were done in participation with Bioware or Traveller’s Tales. Truth is, internal development @ LucasArts isn’t what it used to be and more often than not, things are outsourced to companies like Bioware. Republic Commando which they mention as the last title to be internalized is mostly a footnote and not exactly huge on people’s gaming lists. Force Unleashed might be a good time, but I wouldn’t hold my breath. Traveller’s Tales and Lego is the best thing to happen to the LucasArts franchies in a while. Enjoy that, and try not to focus too much on the internal development aspect. Though I do wish for a SCUMM compilation on the 360 or PS2, but that has almost no chance of happening. (But I can wish!)

There’s plenty of chatter about a seeming run-of-the-mill job posting but, admittedly, it might foreshadow something even for those of us who have qualifications necessary to work for Nintendo. Here ’tis:

—-> * Creating and executing a test plan for Wii’s USB devices < —-- * Executing test plans with great attention to detail and documenting bugs * Writing test procedure documents, gathering, and learning required software/hardware * Reproducing bug reports and helping find work-arounds or resolutions
USB devices for the Wii? Could it be true? That for weeks I’ve been bitching about the lack of storage capacity on the Wii and that a real solution should be in the works. A real HDD drive (even USB attached) would be an easy solution as long as it was made cost effective. Considering the system is a mere $249, anything more than $99 and less than 100gb is a waste of time. I would like to say 250 gb hard drive, $99, but I know better than to wish for things that might or might not be real. Of course a job posting like this might be for a plethora of other devices as well. You could have an insane amount of peripherals that would work with the USB format, perhaps some RockBand instruments or even a Wheel for Mario Kart that actually works. However, it could just be for a coffee warmer or this nifty circus cannon. We shall soon see. 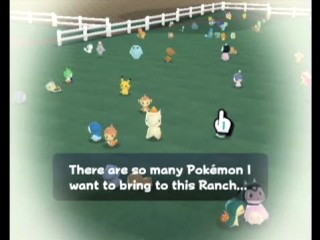 Cause if I’m going to have a ranch, screw the horses, I want Pokemons. The primary purpose lets you import from DS copies of Diamond and Pearl the various GameCards into your ranch which is ran by the girl from the PC Box System, Hayley. If you don’t have Diamond or Pearl, you are given 6 starter Pokeys and given a new Poker each day. Then you take pictures of those little guys and send them to your Miis. They also perform idle actions, such as talking or playing or sleeping with each other. I mean they sleep by themselves, yeah. Anyhow, that’s it. There is no game, just a complicated collecting interface for 1,000 points. This makes Pokemon Snap look ingenious. I’m not even kidding.

Dig Dug, woohoo! Pumping action until they pop. Surely, you know Dig Dug in which you dig around the screen until you run into Fygars and Pookas with your harpoon weapon by filling them full of hot air. Or use the rock treatment to get even more points. It is the NES version, but the game has not changed in 25 years. If you don’t have it somewhere else (PS1, PS2, XBLA, Arcade Standup), go get it. The second title is an odd import cutesy platformer. Originally slated for an American release (but turned down at the last moment), Upa has you playing as a baby who has a rattle to attack his enemies. Told you it was odd. The rattle causes the enemy to inflate and float away. It can then be used as a weapon or as a jumping platform. Health could be replenished with bottles of milk and it is so darn adorable and cute. Somebody shoot me.

Didn’t do too much World of Warcraft this week. My levels are 45/22/16. I spent a lot of time on my hunter. He has two pets (both at level 15) and is progressing quite decently. I still feel like a huntard though. Maybe I’ll get better, I am certainly not going to make anymore characters, three is enough and I would like my thief to get to 70 and the other two at least into their 40’s. We’ll see where it takes me though. I also managed to start playing World Series of Poker 2008 and it’s quite the step up from the piddly Texas Hold Em on XBLA. I’ve done okay and learning more as I go. Tournaments take a bit but there is a save feature which is very helpful. I’ve even knocked out a few pros in tournament play. Fun times, fun times. Outside of that (and the usual Rock Band play), that’s about it for me. I try to take it easy, just enjoy life with my girlfriend and resume something resembling a healthy schedule after the trip to Vegas. We’ll get back in sync and I hope you folks enjoy the ride. Take care kiddoes.

Michael Durr has been reviewing movies for the better part of fifteen years now. He primarily enjoys thrillers, sci-fi, animation and even a little courtroom drama. His favorite films include Escape from New York, the Goonies and anything with Alyssa Milano. When he’s not praising Kurt Russell as the greatest actor of our time or scratching his head over a David Lynch flick, he’s spending time at home in Texas with his lovely wife, Lori and his amazing son. How they put up with him is a mystery, but even Basil Rathbone doesn’t have the time to solve that one.
Lust, Caution Home Improvement: The Complete Eighth Season