A Remake That (GASP!) Doesn’t Suck

Posted in: Brain Blasters by David Annandale on January 27th, 2009 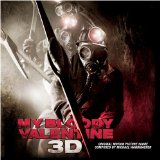 So we’ve had plenty of horror remakes, and we’ll continue to have plenty more. Most, as we know, are at best middling, at worst utter desecrations of the originals. We have had some cases where a remake might actually make sense, cases where the first film could certainly do with some improvement. Amityville Horror, I’m looking at you. And yet somehow, that remake managed to be worse. The job is made easier for the upcoming Friday the 13th retread, since the original, despite its iconic status, is nothing more than hackwork, and I say that with love. But the current offering, and today’s topic, is the 3D return to My Bloody Valentine.

Now, I have a great deal of fondness for the original, not all of which is Canadian pride in a homegrown product. There’s a nice, gritty atmosphere and setting, the killer is well designed, and the murders (truncated though they originally were — all hail the  restored release!) are inventive. But let’s not kid ourselves, either. This ain’t Bergman. This is no holy text.

So that meant I walked into My Bloody Valentine 3D with a certain sense of optimism. And for once, I said optimism was rewarded. Sure, the remake doesn’t have quite the same atmosphere of the original’s Maritime setting, but then again, the original doesn’t have 3D, and when all is said and done, this is probably one of the most satisfying 3D releases of recent memory. It works well enough as a film that one is not bored in between the pokes in the eye, and when those pokes come, they do so spectacularly, whether we’re talking about a pickaxe hurtling towards your face, blood gouting into your lap, or the most direct bullet-to-the-audience’s nose shot since The Great Train Robbery back in 1903.

One of the film’s biggest virtues is its utterly unapologetic wallow in exactly what it is. In other words, it delivers exactly what a slasher movie called My Blood Valentine should deliver, and the excess with which it does becomes a sly wink to the audience. Thus, the gore is quite insanely OTT, and I’m pleasantly surprised by how far the filmmakers were able to go and still keep their R rating in the States. This is the kind of old-school slasher nastiness that made the 1980s so, well, 1980s. The nudity, too, becomes self-referentially exaggerated. You know it’s going to be there, but here it is concentrated into a single scene, and so extended (and pointed out by the characters themselves) that the viewer might well begin to squirm with just a hint of shame.

But the most pleasant surprise is the relationship the remake has with the original. There is no repudiation here, and neither is there slavish adherence. There is, rather, genuine affection. The new version is faithful in spirit to its ancestor, and fairly faithful to the letter as well. But those who know the original by heart need not worry about being bored here. In fact, they are likely to enjoy the film even more than those who don’t have the original under their belt. The new storyline, while recognizable, introduces just enough variations to keep things from becoming stale. Further, the filmmakers clearly expect a certain sector of the audience to recognize the variations as just that. Thus, far from attempting to supplant the original, the remake seems to be positioning itself as a supplement, and the two films become the richer for their entanglement.

So while I’m not arguing that this is a reinterpretation on the order of The Thing or The Fly, neither is the film. It is what it is, and is quite happy, thank you very much. Frankly, we’d be lucky to get more remakes like this.