The people at Smithsonian Networks decided to send us a few documentary discs in the last week. The discs were presumably made to show off a few of their network shows on the Smithsonian HD channel which is starting to crop up on many satellite outfits including DirecTV and Dish Network. It is also listed on some of the cable companies lineup including TimeWarner and Charter Communications. The first disc is called Sky View and subtitled “Soar like an Eagle; A Unique View that will take your breath away.” Hopefully the proceedings won’t be too high, I just might get airsick.

In splendid picture quality and sound, we are introduced to four different episodes in Sky View.

Southern Britain is first. As the name implies, we travel to the southern tip of London and explore areas such as Cornwall which has some of the finest country in England. Then off to the River Thames and on west to Heathrow. Then look at the mysteries of Stonehenge before heading off to some more modern day mysteries at the prisons in Dartmoor. Plymouth isn’t too far behind that and we all know that a little rock was the basis of much history. This documentary finally ends at the fabled Islands of Scilly.

The next episode takes us to the Emerald Isle or better known as Ireland. There is much wilderness and beauty which is surprising since it is so small in actual size. The journey starts at the north end or Malin Head. Then it takes on remote areas such as Donegal and the mountains of Moher Cliffs. It goes to the river Shannon and then the giant rock formation of Ben Bulben. We finally end up at Bantry Bay where the rebellion of 1798 took place before finishing up at the southern most point of Mizen Head.

The third episode is named the Heart of Italy. Culture, beauty and romance find you here. A journey that takes you to the capital city Florence which is in the region of Tuscany. While here, we travel a little bit west and come to Pisa, the city that houses the famous leaning tower. Then we go across the Tuscany region and end up in Umbria. Here we also stop in Montepulciano, home of some famous vineyards before moving on to Assisi, home of many famous saints. Then it continues south until it hits the fabled city of Rome.

The final episode of the disc takes us to the French Riviera in southern France The journey first takes place in the Pyrenees mountains and then off to the coast of Narbonne. We keep going east until we hit Camargue where the wildlife is breathtaking. Finally we head off to the namesake of the episode in ever popular French Riviera. The final leg of the list of destinations take us to Monaco where the rich and famous play.

All of the episodes crank in at about 26 minutes, leaving this disc at a smidgen under a couple of hours. The scenery is gorgeous and the moderator gives us tidbits of culture, history and geography while we fly around and around the various areas. But there is one thing really missing here, any sense of excitement. Sure the area is beautiful, but the episodes have a better chance to put you to sleep then bring up some real “oh wow this is Italy”. You are more than likely going to figure how many months of your salary needs to be stored away before you can visit one of these splendid places rather than invest in the disc.

To be honest, this disc is best suited for classrooms. That geography or social studies teacher who needs to catch up on his or her grades and takes the disc and shows them an episode a day for a week. Then on Friday, they give a little quiz and by then they are caught up with grades and can continue on their normal lesson plans next week. It’s not a bad disc, after 20 minutes of sky views you just wish they would swoop down and show us something more than an aerial view. 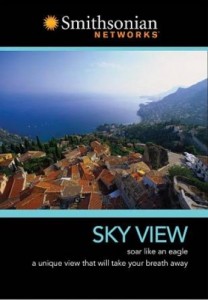 Michael Durr has been reviewing movies for the better part of fifteen years now. He primarily enjoys thrillers, sci-fi, animation and even a little courtroom drama. His favorite films include Escape from New York, the Goonies and anything with Alyssa Milano. When he’s not praising Kurt Russell as the greatest actor of our time or scratching his head over a David Lynch flick, he’s spending time at home in Texas with his lovely wife, Lori and his amazing son. How they put up with him is a mystery, but even Basil Rathbone doesn’t have the time to solve that one.
The Middleman Big Blue, The