This week, we are continuing to give small reviews to a range of discs from the Smithsonian Network. The next disc is entitled: The Big Blue. This documentary goes into Southeastern Australia and tells us the unique tale of the blue whale, the largest creature in the world. The whale has a heart the size of a small car and a tongue that weighs several tons but is more elusive than a cunning criminal. In the next 45 minutes, I hope to uncover a little more of those mysteries and other odd facts.

A fisherman off the southeastern coast of Australia has spotted a rare occurrence. He has seen a whale twice the size of the boat. He has seen what is known as a blue whale, the largest of the animals on the planet Earth. The spectacle is due to a yearly event called the Bonney Upwelling which is when nutrient rich cold water wells up the shelf and triggers an explosion of life from December to April.

The explosion of life includes seals that swell to thousands in population on the shores alone. There are also birds known as gannets that cover the shore fighting for space as their sheer numbers far outreach the number of square miles they inhabit. Penguins are also featured but their tale is a bit of sad one as many starve because the animals can not dive far enough into the ocean to retrieve the food they need.

We return back to the study of the blue whales where we join the boat of Dr. Peter Gill and his crew. They are alerted by local fisherman and small planes that overlook the ocean that there are about thirty blue whales in the area. However, Pete has considerable trouble in locating them. After a few days, they do manage to find a few of them searching for krill, their natural food source.

Mysteries still remain. Nobody really knows where these whales come from or where they go back to when the Upwelling ends in April. To help understand some of this, they uncover some whale feces and take them back for investigation. The whales also shed some skin which include DNA trails and might help locate some genetic material which might better solve the path the whale travels to get to the Upwelling.

At the end of the journey, the doctor witnesses a couple of splendid sites. The first is a whale affectionately named “Spot” (they are usually identified by their fin) which was found on February 21st, 2005. The interesting thing here is that Spot was actually photographed 7 years ago in the same exact area in the same span of a week. The final piece of wonder and awe is the blue whale actually feeding on krill, a true sight for Dr. Gill and his crew.

There is another documentary included on the disc as a bonus feature and it is entitled: “Footprints on the Water: The Nan Hauser Story”. Nan Hauser is a famous whale scientist who specifically studies beaked and humpback whales off the coast of the Bahamas and Cooke Islands. She is instrumental in documenting issues about the whales as well as creating sanctuaries for their survival. She also has a rather nice bike.

The major area of concern here is the use of low and particularly mid range sonar signals used by the American navy which seems to be confusing the whales and causing some of them to beach themselves on the nearby shore. By working with the navy, she hopes to find a way to curtail this practice. There is also some footage of how Nan tags the whales and studies their sounds & habits. Near the end of the feature, there is a truly gorgeous sight of a whale newborn calf and her mother as they swim out in the open waters.

As expected, the footage of the whales is breathtaking. It’s amazing how close we are able to get to these majestic creatures but yet how little information is known about them. But that’s something the documentaries teach us again and again, and that is despite the footage we get there is really so much yet to learn from each and every exploration. That’s why the first documentary in particular spends so much time talking about the neighboring port towns or the other wildlife. We get 15 minutes of blue whales and about 25 minutes of seals (including seal on seal loving), gannets, & penguins.

In the same breath, the main feature is actually the lesser of the two documentaries. The Nan Hauser story is far more interesting and personable. We learn a lot about Nan and some good information about the beaked and humpback whales. These two documentaries were well placed together on this disc but honestly I would feel slighted if the only footage used was from the Big Blue.

After an hour and a half of whale watching, I feel I come away a better person for seeing truly wondrous sights of some fantastic wildlife. The picture is amazing (though I still think they should put together some of these for Blu-Ray), and the sound does well to bring the documentary inside your home. This is recommended for those who enjoy aquatic creatures and the scientists behind them. Only word of warning is that you might not see as much blue whale as you want, but given the circumstances it is expected. 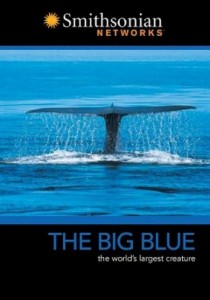 Michael Durr has been reviewing movies for the better part of fifteen years now. He primarily enjoys thrillers, sci-fi, animation and even a little courtroom drama. His favorite films include Escape from New York, the Goonies and anything with Alyssa Milano. When he’s not praising Kurt Russell as the greatest actor of our time or scratching his head over a David Lynch flick, he’s spending time at home in Texas with his lovely wife, Lori and his amazing son. How they put up with him is a mystery, but even Basil Rathbone doesn’t have the time to solve that one.
Sky View Leverage: The First Season