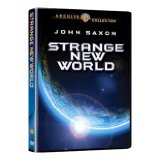 “This is the PAX Space Laboratory. We were working on an experiment in suspended animation…”

The release of Strange New World on the Warner Archive label is another example of just what a great idea this system from Warner Brothers really is. We’re talking about an obscure title here that had zero chance of ever reaching a standard release on any of the available formats. This is where the Archive Collection makes these kinds of cult-favorite shows and films accessible to the fans out there who have long felt forgotten. So, wake up from your long slumber and join me on an unexpected visit to the Strange New World.

“That’s me, Captain Anthony Vico. I went from test pilot to astronaut, and now I’m the leader of the PAX team. Allison Crowley, navigator and communications expert. PAX doctor William Scott. In our deep sleep, we thought all was well. While Mission Control monitored our flight path, they discovered a mass of giant asteroids hurtling through space directly toward us. They were able to recompute our orbit away from the speeding asteroids. They could save us, but not themselves. Meteors rained down on Earth for days. It was the worst disaster in the history of the world. They saved us by extending our suspended animation. Our new orbit would loop the Sun and return in 180 years.”

John Saxon was actually a part of several science fiction pilots in the early 1970’s. Many of them shared a common theme of suspended animation and the thrust of a contemporary man into the future. At least two of them, Genesis II and Strange New World have now made it to the Warner Archive Collection.

“Back on Earth, only hours before the disaster struck, several hundred volunteers, our loved ones among them, entered the underground suspended animation chambers at PAX HG. Like us, they were in a deep sleep. We were awakened by our computer, and it gave us instructions to return to PAX and free those helpless people from an endless sleep. That big blue round ball was a welcome sight. Whatever had happened to it didn’t matter. It was still our home. Bu, what would we find in this Strange New World”?

When the three-person crew arrives on Earth, they get into their trusty rover and attempt to follow a signal which will lead them back to PAX and the sleeping population. Unfortunately, they’ve been expected by the citizens of Eterna. The community hijacks the signal and lures the PAX team. They have been living, nearly forever, by growing clones for spare parts. But their immunity systems are breaking down, and they need new blood. The second part of the story has them intervening in a tribal war between primitive men.

The community is the typical Utopian-looking place that was common to the genre of the day, particularly many of Roddenberry’s ideas. This was actually not one of Roddenberry’s stories, but it might as well have been. It appears to be a pretty obvious rip-off of his Genesis II ideas. It had all of the elements, from the costumes of the Eternas to the Star Trek sound effects used extensively on the show. The series is quite dated and appears almost camp by today’s standards. Understand, these guys were playing this all seriously, and it was hoped that a television series would emerge from the effort. The show didn’t happen, and the title has since slipped into obscurity, until now. It’s strictly a curiosity or nostalgia trip, just perfect for the modestly- priced Warner Archive Collection. I still hear some criticism over this collection, the fact that they are pretty cheap DVD-R’s with minimal packaging. You really have to understand that otherwise shows like this are gone forever. “Maybe now you’ll understand.”

You can order it directly from Warner, as well: Warner Archive Collection

Gino Sassani is a member of the Southeastern Film Critic's Association (SEFCA). He is a film and television critic based in Tampa, Florida. He's also the Senior Editor here at Upcomingdiscs. Gino started reviewing films in the early 1990's as a segment of his local television show Focus. He's an award-winning recording artist for Omega Records. Gino is currently working on his 8th album Merchants & Mercenaries. Gino took over Upcomingdiscs Dec 1, 2008. He works out of a home theater he calls The Reel World. Favorite films: The Godfather, The Godfather Part II, The Body Snatcher (Val Lewton film with Karloff and Lugosi, not the pod people film), Unforgiven, Gladiator, The Lion King, Jaws, Son Of Frankenstein, The Good, The Bad And The Ugly, and Monsters, Inc.
Ancients Behaving Badly Hoarders: The Complete Season One