Posted in: Contests by Gino Sassani on October 2nd, 2010 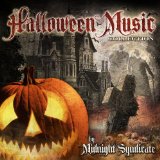 Our friends over at Midnight Syndicate have given us a  couple of their haunting Halloween music CD’s to give away. We recently talked to Midnight Syndicate mastermind Edward Douglas in a podcast interview. (check that out Here) Now you can experience the sounds of the season direct from The Midnight Syndicate. We’re giving away two CD’s to one lucky winner: Halloween Music Collection and The 13 Hour. You’ve heard their music on television and at your favorite haunted house event. To win these spooktaclular CD’s, follow these instructions.

Gino Sassani is a member of the Southeastern Film Critic's Association (SEFCA). He is a film and television critic based in Tampa, Florida. He's also the Senior Editor here at Upcomingdiscs. Gino started reviewing films in the early 1990's as a segment of his local television show Focus. He's an award-winning recording artist for Omega Records. Gino is currently working on his 8th album Merchants & Mercenaries. Gino took over Upcomingdiscs Dec 1, 2008. He works out of a home theater he calls The Reel World. Favorite films: The Godfather, The Godfather Part II, The Body Snatcher (Val Lewton film with Karloff and Lugosi, not the pod people film), Unforgiven, Gladiator, The Lion King, Jaws, Son Of Frankenstein, The Good, The Bad And The Ugly, and Monsters, Inc.
“31 Nights Of Terror” Contest: Win A $25 Gift Certificate From Diabolik DVD Two Tickets to Paradise