Posted in: Contests by Gino Sassani on January 5th, 2020 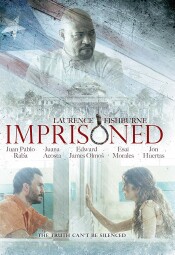 On The Twelfth Day Of Christmas Cinema Libre Studios Gives To You:

Imprisoned on Blu-ray. Cinema Libre Studios has joined the list of contributors to our Christmas contests. We just made some new friends over there, and to celebrate they sent us over a copy of Imprisoned with Laurence Fishburne. Jeremy will be reviewing the disc soon, but now’s your chance to jump on the last of our holiday contests. We all look forward to a brand new year of bringing you the best home theater coverage and beyond.

Gino Sassani is a member of the Southeastern Film Critic's Association (SEFCA). He is a film and television critic based in Tampa, Florida. He's also the Senior Editor here at Upcomingdiscs. Gino started reviewing films in the early 1990's as a segment of his local television show Focus. He's an award-winning recording artist for Omega Records. Gino is currently working on his 8th album Merchants & Mercenaries. Gino took over Upcomingdiscs Dec 1, 2008. He works out of a home theater he calls The Reel World. Favorite films: The Godfather, The Godfather Part II, The Body Snatcher (Val Lewton film with Karloff and Lugosi, not the pod people film), Unforgiven, Gladiator, The Lion King, Jaws, Son Of Frankenstein, The Good, The Bad And The Ugly, and Monsters, Inc.
12 Days Of Christmas Giveaways – Day 11: Win Ralph Breaks The Internet On Blu-ray From Disney Millennium Actress (Blu-Ray)