Posted in: News and Opinions by Gino Sassani on December 7th, 2010 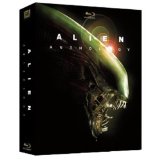 Upcomingdiscs continues with our handy Holiday Guide. Once again we’ve come up with those special Blu-ray releases out there that will showcase your friend’s new Blu-ray player or high-definition television.

With FOX/MGM we get into a couple of titles that are collections of classic films. These are the kind of releases that might be a little heavier on the budget. That makes them the kind of thing less people are likely to buy for themselves. It also gives you the chance to swoop in and be there hero on Christmas morning. Just don’t be surprised if they end up locking themselves in their home theater all day long. You may have to keep that holiday dinner warm for a while. Give these gifts, and you’d better include popcorn on that holiday menu.

Don’t forget to make your Amazon purchases through our links and support Upcomingdiscs.

That was the slogan that drew a conglomerate of horror and science fiction fans to theatres in 1979. Was it horror or sci-fi?  Alien turned out to be a rare cross-genre film that managed to satisfy both audiences. Ridley Scott started out by bringing the “spaceship” film away from the glamorous bright future and depicted a world startlingly very much like our own. In Scott’s gritty future, companies are quasi-government agencies, and these astronauts are not explorers out for glory and heroism. They are strictly blue-collar workers trying to make a buck. It’s hard to imagine that most of the cast, including Sigourney Weaver, were relative unknowns at the time. Weaver would create a new model for female leads that would later pave the way for actors like Linda Hamilton.

Now Fox has finally brought the collection home in high-definition Blu-ray. The Alien Anthology is more than just a collection of the films. The treasure trove of extra features is among the most impressive in any release this year. Everything from the earlier DVD collection has been retained, and so much more has been included.

If someone on your Christmas list loves the Alien films, this one should be a no-brainer.

“You’re not in Kansas any more. You’re on Pandora, ladies and gentlemen. Respect that fact every second of every day. If there is a Hell, you might want to go there for some R&R after a tour on Pandora. Out there beyond that fence, every living thing that crawls, flies, or squats in the mud wants to kill you and eat your eyes for Jujubees…”

And the George Lucas Award for the filmmaker who has mined the most out of his movie this year….the envelope please. It’s James Cameron for releasing not one, not two, not three, but four different versions of Avatar in less than a year. But I’ll have to give him a pass, just this once. This 3-disc collection offers enough goodies that it will tempt you to trade in your still-new version for this complete collection. Better yet … put it at the top of your Christmas list. The film comes in three versions. One with 8 minutes added. Another with 16. What’s the point of having the new version if not to see the most extensive edit?

What makes this a great Christmas gift is that it is a new release of a film that has been out on Blu-ray recently. I’m sure there is someone on your holiday list that has Avatar on Blu-ray and is struggling over getting this comprehensive collection. Let them struggle no more. In fact, pick up two copies. Hey, no one says you can’t get a little something for yourself, right?

Both of these last two sets come with great collector books with full color photos and a sturdy keepsafe.

“Ride into this world all alone. God takes your soul. You’re on your own.
The crow flies straight, a perfect line on the devil’s back until you die.
Gotta look this life in the eye”.

When these guys send a message, they don’t use Western Union. Not only will they blow up your warehouse, but they’ll catch one of your guys and plant a stick of dynamite in his butt cheeks to set off the explosion. That’s the world of the motorcycle club, the Sons Of Anarchy. In the wake of The Shield, FX stays true to form with the latest from that show’s alumni Kurt Sutter. Sons Of Anarchy has a familiar tone and quality to it for fans of that now-gone cop drama. There’s a lot of handheld camera stuff, and you have very similar themes.

I have to tell you that this series has been one of the best to come out in Blu-ray this season. Ron Perlman is one of the most underrated actors in the business. This thing sports a great cast and some solid stories. It’s also one of the best shows that too many people haven’t heard about yet. Use the gift-giving season to introduce someone to their next favorite show.

“You got everything money can buy, except what it can’t. It’s pride. Pride is what got you here. Losing is what brung you back. But, people like you, they need to be tested. They need a challenge.”

There have been a ton of boxing films. They’ve been popular going back to the silent era. Most of them have many of the same themes. But there was always something about Rocky that stood out above all of the rest. That “something” can’t really be described or defined. As the Supreme Court once said about the definition of obscenity: “I can’t define it, but I know it when I see it.” That’s all you can say about Rocky. Some might call it heart. That’s about as good a word for it as anything else. Rocky himself would call it “stuff in the basement”. It almost demeans it to put a word on it at all. Whatever you call it, you don’t necessarily see it in Rocky … you feel it.

All six films are gathered here, some for the first time in high definition and Blu-ray. The results are mixed. After all, Rocky’s world is a gritty and dark place where the image isn’t supposed to look all that good. The films take us to some of the lesser-known areas of South Philadelphia. These are the kinds of places you don’t see on the brochures or the tourist commercials. But they are as real as it gets. This was the first film to use a Steadicam. You aren’t getting these discs for a shiny picture. You will get them because they are all collected in one place in the best condition they’ve ever appeared in.

This is an undisputed champion collection. The Rocky films have certainly left their mark. It was as much an underdog story for Stallone himself as it was for Rocky Balboa. Do they stretch credulity at times? Of course they do. But these were, for the most part, smart films that provided a realistic enough insight into boxing that it’s easy to forgive the fairy tale aspects of it all. About the only thing bad I can say about this set is, “Took you long enough to get here”.

For more information on other holiday ideas from FOX/MGM, bang it here to visit them at FOX/MGM

MGM & Fox have partnered with Hollywood Movie Money to offer up to $10.00 (on select Blu-ray titles) and up to $7.50 (on select DVD titles) toward the purchase of theatrical tickets to The Chronicles of Narnia: The Voyage of The Dawn Treader and Gulliver’s Travels. This is a fantastic deal, which you can find directly on the Blu-ray and DVD packaging in store.

Gino Sassani is a member of the Southeastern Film Critic's Association (SEFCA). He is a film and television critic based in Tampa, Florida. He's also the Senior Editor here at Upcomingdiscs. Gino started reviewing films in the early 1990's as a segment of his local television show Focus. He's an award-winning recording artist for Omega Records. Gino is currently working on his 8th album Merchants & Mercenaries. Gino took over Upcomingdiscs Dec 1, 2008. He works out of a home theater he calls The Reel World. Favorite films: The Godfather, The Godfather Part II, The Body Snatcher (Val Lewton film with Karloff and Lugosi, not the pod people film), Unforgiven, Gladiator, The Lion King, Jaws, Son Of Frankenstein, The Good, The Bad And The Ugly, and Monsters, Inc.
Avatar (Three-Disc Extended Collector’s Edition) Diary of a Mad Black Woman: The Movie (Blu-ray)