One of Upcomingdiscs readers, Andrea Mandarino was one of the winners of the contest.

Upcomingdiscs would like to congratulate her on her winning design. 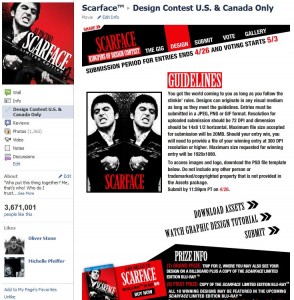 To celebrate the upcoming release of SCARFACE on Blu-ray TM, fans had a once-in-a-lifetime opportunity to design Scarface-inspired artwork using classic Tony Montana images from the film.

Fans voted on their favorite ten submissions which will be featured as exclusive art cards in the upcoming Scarface Limited Edition Blu-ray TM and the winners are:

With the highest number of fan votes, Grand Prize winner Adolfo Maalindog’s winning design will not only be included as an art card in the upcoming Scarface Limited Edition Blu-ray TM, but he has also won a trip for two to Las Vegas where his Scarface-inspired art will appear on a billboard to promote the release.

Gino Sassani is a member of the Southeastern Film Critic's Association (SEFCA). He is a film and television critic based in Tampa, Florida. He's also the Senior Editor here at Upcomingdiscs. Gino started reviewing films in the early 1990's as a segment of his local television show Focus. He's an award-winning recording artist for Omega Records. Gino is currently working on his 8th album Merchants & Mercenaries. Gino took over Upcomingdiscs Dec 1, 2008. He works out of a home theater he calls The Reel World. Favorite films: The Godfather, The Godfather Part II, The Body Snatcher (Val Lewton film with Karloff and Lugosi, not the pod people film), Unforgiven, Gladiator, The Lion King, Jaws, Son Of Frankenstein, The Good, The Bad And The Ugly, and Monsters, Inc.
Contest: Win A Copy Of The Bollywood Hot 3 Idiots On DVD From Fox Top Spin 4 (Xbox 360)