The Darkness II Coming to A Store Near You, And Here To Upcomingdiscs

Posted in: News and Opinions by Gino Sassani on February 3rd, 2012 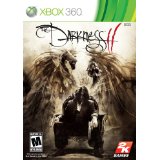 I know that many of you just can’t wait for 2K to release the new video game The Darkness II. Wait no longer. We have some trailers to share with you. There will also be a copy on the PS3 up for grabs in the weeks to come right here. Michael Durr will also deliver one of his exceptional takes on the game. Until then, enjoy a few tastes of the upcoming game.

Bang it here for for the “Sliced” Trailer: Darkness II: Sliced

Gino Sassani is a member of the Southeastern Film Critic's Association (SEFCA). He is a film and television critic based in Tampa, Florida. He's also the Senior Editor here at Upcomingdiscs. Gino started reviewing films in the early 1990's as a segment of his local television show Focus. He's an award-winning recording artist for Omega Records. Gino is currently working on his 8th album Merchants & Mercenaries. Gino took over Upcomingdiscs Dec 1, 2008. He works out of a home theater he calls The Reel World. Favorite films: The Godfather, The Godfather Part II, The Body Snatcher (Val Lewton film with Karloff and Lugosi, not the pod people film), Unforgiven, Gladiator, The Lion King, Jaws, Son Of Frankenstein, The Good, The Bad And The Ugly, and Monsters, Inc.
The Tuskegee Airmen Are You The Real John Carter? Walt Disney Pictures Is Looking For YOU.