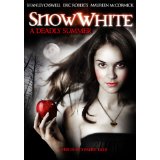 “You should have listened to me. As long as she’s in the picture, you will never come first.”

Snow White: A Deadly Summer really should have been called Marcia Brady: Serial Stepmom. At least that would have been a more honest title than this Snow White trend rip off. This is bottom of the barrel, abominable direct to DVD crap at its worst. The only positive thing about it is that Maureen McCormick, Marcia Brady herself, plays the wicked step mother. The legendarily bad Eric Roberts plays Snow’s dad, proving there is no role too low for him to sink to. Sometimes movies can be so bad they are good, crossing into camp treasures. These are the some of the slowest and most painful 85 minutes you will ever lose.

Devastated by her father’s remarriage, Snow (Shanley Caswell) begins to act out toward her new stepmother (McCormick). Given an ultimatum by his new wife, Snow’s father (Roberts) sends his daughter off to a summer camp for bad kids. There is some clichéd bullshit about the camp being the site of a murder several years ago and the suspect fleeing into the woods, never to be seen again. Before you can say I’ve seen this many times before, campers begin dying off and Snow senses the killer is stalking her.

So no dwarves, no poison apples, no woodsmen, no magic mirror (OK, Marcia, Marcia, Marcia has schizoid conversations with herself in a mirror) and really no reason at all to be called Snow White other than to cash in on the two Snow White films coming to theaters this summer and Once Upon a Time on TV. They try to set it up as a slasher-style mystery, but ultimately it’s no mystery at all as to who the killer is. If you watch the trailer you get the entire story including the end reveal.

Snow White: A Deadly Summer suffers from terrible acting, a horrible script, poor cinematography, no nudity or gore, and zero suspense. There simply isn’t a redeeming value unless you are a Marcia Brady fetishist and would want this to complete your twisted little
Brady Bunch collection. With Roberts and McCormick there was the potential of a campy z-movie romp, but it takes itself way too seriously for any fun to be had.

Contest: Win The First Season Of Game Of Thrones From HBO The Tribe: Series 1, Part 1