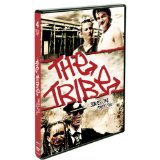 The Tribe is a New Zealand/British post-apocalyptic, young adult soap opera, beloved around the world. So I had to put on my young adult glasses and watch it through those.  In the near future, an unknown virus wiped out all the adults on Earth. Left to raise themselves, the kids form tribes in a Lord of the Flies type society. Now, being that the average viewer is probably between 12 – 17 years old, it is a very mild Lord of the Flies society.

At first glance it looks like a comedy skit gone wrong. The crazy hairstyles and face makeup look like it was lifted from the set of one of those horrible Road Warrior knock offs that came out in the 80s. The budget is obviously very small, so the sets are simple and quite redundant. The opening song and soundtrack is all kinds of cheesy schmaltz, so much so, it could put you off the show if you let it. The acting is a bit stiff to begin with as well. Not to mention the writing is quite juvenile, but that is kind of the point. This show is for tweens and teens, and it speaks to them, and boy do they love it.

The story starts about six to nine months after all the adults have been killed by an unknown virus. We follow the surviving children and teens in and around an unnamed city as they seek to build a new world out of the anarchy, confusion, danger and fear. With no adults to guide or protect them, the kids must fend for themselves and try to hold onto their humanity. It’s bad enough to be in a post apocalyptic hell, but they also have to deal all the problems of being a teenager at the same time.

The show mainly focuses on the Tribe of the Mall Rats. The members are challenged with issues of survival (securing clean water, food), issues of technology (reestablishing energy, power), and mostly issues of morality (loves, fears, betrayals, ambitions, friendships). They must fend off the other warring tribes and try to bring peace to the city. It is a very large ensemble cast, and it bounces from cast member to cast member, but if there were a star in the show it would probably be Lex (Caleb Ross), defender and default leader of the Mall Rats.

The series starts out a bit slow, but picks up around episode six. It definitely has the soap opera addiction going for it. I couldn’t recommend this to adults; even though there are rabid adult fans of the show, this really is just a teen soap opera. I should think the costuming and set design may seem a little primitive to today’s young viewers, but if they can get past the lo-tech production values, they will get caught up in the teen angst.

The four-DVD disc set is presented in a 1.78:1 wide screen aspect ratio. The colors are bright, but the images are a bit washed out and soft. The blacks are crushed, and there is a certain amount of compression artifacting.

The Dolby Digital 2.0 track doesn’t do anything more than serve the dialog. There is very little surround immersion, and the music soundtrack tends to overpower the dialog at times.

I am way out of the age range for The Tribe, but I think it holds a lot of potential for children between the ages of 8-16. I can understand how it has such a loyal international following. Not my cup of tea, but your kids may dig it.