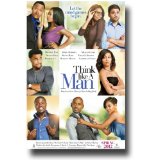 More than any other genre — except maybe “M. Night Shyamalan movies” — romantic comedies really take a beating. We’ve all heard the complaints: “They’re safe.” “They’re predictable.” “The apartments are unrealistically amazing.” “They all star Jennifer Aniston or Katherine Heigl.” Of course, these complaints also double as the reasons why lots of people love them. (Ok, maybe not so much the part about Aniston and Heigl.) Either way, I think we can all agree that rom-coms as a whole could benefit from some sort of fresh twist or wrinkle. Think Like a Man, despite the efforts of a likable cast, is not here to provide that freshness.

In fact, the sweaty indoor gym where the male characters routinely meet to play basketball probably gives off a fresher smell than this movie. Unfortunately, this was obvious from the instant the movie started. (I wish there had been a place where I could bet the movie would kick off with James Brown’s “It’s a Man’s Man’s Man’s World.” I could’ve made some easy cash.)

The movie is based on comedian Steve Harvey’s 2009 smash “Act Like a Lady, Think Like a Man.” In adapting Harvey’s relationship advice book — a job that fell to director Tim Story and screenwriters Keith Merryman and David A. Newman — there’s good news and bad news. The good news is there’s no storyline to butcher, so you won’t have fans of the book whining about what got left out. The bad news is there’s no storyline. That being said, I thought the movie’s meta conceit was actually pretty neat. Unlike He’s Just Not That Into You — that other romantic comedy with a jumbo ensemble based on a popular non-fiction book about relationships that co-starred one of the less funny cast members from Entourage — Harvey’s book exists in this movie’s universe (the author himself appears from time to time to dole out choice soundbites) and manages to fall into nearly every character’s hands. (This movie may come up short as a romantic comedy, but it’s a smashing success as a two-hour commercial for the book!)

The names of the characters aren’t nearly as important as their labels. As a result, the romantic match-ups include The Player (Romany Malco) vs. The 90-Day Rule Girl (Meagan Good), The Mama’s Boy (Terrence J) vs. The Single Mom (Regina Hall), The Non-Committer (Jerry Ferrara) vs. The Girl Who Wants the Ring (Gabrielle Union), The Dreamer (Michael Ealy) vs. The Woman Who is Her Own Man (Oscar nominee Taraji P. Henson), and The Man in the Iron Mask vs. The Girl with the Dragon Tattoo. There’s a chance I made one of those up.

Although comedian Kevin Hart steals every scene he’s in as recently-divorced Cedric — I can understand how his hyperactive shtick could rub some people the wrong way, but I appreciated the way he gave the movie a kick in the pants whenever he appeared — I generally liked all the performers. I was particularly impressed by the layers Malco brought to smooth operator Zeke, the way Good matched him stride for stride, and Terrence J’s easy charm as sweet, oblivious mama’s boy Michael. The romantic pairings had good chemistry with each other — Ealy and Henson seemed to attack their kissing scenes with extra vigor — and even the casting of singer Chris Brown as an inconsiderate jackass was spot-on.

Unfortunately, Story — who doesn’t offer much as a director other than an amusing animated opening sequence — routinely bails out on scenes way too soon. Right when the audience is starting to connect with a couple, it’s time to go off and check on the next one. The result is unfortunate for two reasons: 1.) Think Like a Man winds up being too long because it has so many characters to serve. (There are literally four different instances of the cliché romantic comedy scene where the men in the relationships track down their partners and profess their love while other people look on. Four!) 2.) Each of the main pairings — which have been the basis for entire movies like Hitch, Something New and Monster-in-Law — wind up getting shortchanged.

Harvey’s book smartly tapped into the appealing idea of giving one side an advantage in the battle of the sexes. The contrived movie adaptation — everything seems to go really well and really badly for everyone at the same time — primarily exists to reinforce the notion that, if given the opportunity, a mostly African-American cast of attractive actors is just as capable of making a crappy, mass-appeal romantic comedy that delivers a few laughs but brings nothing new to the table. (You may not believe this, but I actually think that counts as progress.)