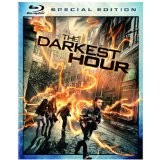 “This is how it starts…”

You know, it’s getting awfully hard to make an original alien invasion film. Most filmmakers have accepted the obvious and go for mind-blowing f/x and never mind the story. Still others go the trendy found-footage route. I was pleasantly surprised that The Darkest Hour appears to prove that there just might be more than just fumes in the creative tank after all. I’m not going to try to convince you that the film doesn’t rely on much of the tried and true standby material. It covers most of the traditional formula. What I will try to convince you of, however, is that The Darkest Hour feels fresh even if it does rely on many of the standard conventions. In the end, it’s a very entertaining film that proves you don’t have to break the bank or take the shaky camera angle to put some quality on the screen.

Ben (Minghella) and Sean (Hirsch) are in Moscow to close a big business deal. A group of investors led by Skyler (Kinnaman) is about to put up a ton of money for their new social network program. When they get there things don’t turn out quite the way they planned. Then there’s that alien invasion thing that happens their first night in town. They survive the initial invasion along with two American tourists, Natalie (Thirlby) and Anne (Taylor). Along with Skyler, they find themselves in a strange country and nearly every other human is dead.

The aliens first appear as a swarm of golden lights falling from the sky. They appear to be some kind of fireworks illumination,  and the crowds watching them descend start out with the ooohs and aaahs of amazement. But they are bio-electric creatures. When they touch a human, the victim gets shredded into a collection of cinders and tossed to the winds. There does appear to be a tendency for one sneaker to go flying from the devastation. Once on the ground the creatures are mostly invisible except when interacting with a victim or anything that uses electrical power. It’s a handy piece of information. If you carry something like a light bulb with you, it can act as an early warning system that an alien is nearby.

The group of five find small pockets of survivors throughout the city, and they attempt to work together to reach a more organized rescue operation. I doubt that I’m revealing much by telling you that no one is safe both in the group of five and among the few survivors they encounter.

The first thing that you quickly notice is the Russian locations. Few American films have been made in that environment, so the fresh feeling certainly begins here. So many major cities have been overexposed in these films that Moscow tends to feel alien enough already. It doesn’t look quite like any city we’ve seen before in this kind of a movie. It’s a huge city with one of Europe’s largest populations, but the crew managed to do a great job with their production department to control and evacuate large segments of the city at one time. That in itself appears to have been a huge obstacle to overcome.

The cinematography carries some of the elements of a found-footage film without the excess. There’s no pretending that one of the group is documenting the events, but there is an intimacy with the way the film was shot. The style works in fine contrast to the large empty places around the characters. It’s as if the action was indeed being captured as it happened, but by an experienced documentary crew and not some amateur knucklehead with a fascination for the ground.

The cast isn’t really spectacular, but they have excellent chemistry. The early parts of the film show some weakness in the performances during the setup story. But once the action kicks in, the film becomes far more compelling. It’s a textbook case of the whole being greater than the sum of the parts. This thing works great as an ensemble piece.

Finally, let’s talk a bit about the aliens themselves. It was not only a cost-cutting decision to have the aliens invisible most of the time, but it was a brilliant creative move as well. Now, we’re not talking just simple invisibility here. You see short glimpses of this orange electrical power moving about from the creature’s center. It’s used to find and attack victims. There are a few payoff glimpses of the entire creatures as our characters discover ways to get through their cloaks and shields. It’s a pretty cool effect without being all that fancy. Often what you don’t see is more frightening than anything a computer can create for you. It generates some rather nice dramatic moments here and doesn’t feel like a cheap stunt.

This one is most definitely worth your time. This is director Chris Gorak’s second film. He has worked as an art director on such movies as Tombstone and Fight Club. Obviously, he was paying attention. Writer Joe Spaihts isn’t quite as impressive. The dialog is the worst part of the film and is almost always awkward. Give credit to the actors for making it not appear quite so bad, but it is. It almost sounds like it was taken from a bad translation. I hope it’s an aberration. Spaihts is also the writer on Ridley Scott’s Alien tie-in film Prometheus, and he’s currently at work on a reboot of Universal’s Mummy franchise. Let’s hope for better dialog there.

The Darkest Hour is presented in its original aspect ratio of 2.40:1. The 1080p image is arrived at with an AVC MPEG-4 codec at an average 25-30 mbps. The high-definition image presentation is a bit of a mixed bag. There is a lot of fine detail here, and the long shots are particularly sharp and crisp. There are times when some digital noise comes into the picture and is enough to distract you from the film. Black levels are soft, but that’s pretty much a creative choice here as they appear a bit murky at times. The opening sequence is actually pretty cool.

The DTS-HD Master Audio 5.1 isn’t going to knock your socks off, but it does the job. There are a few times I needed to check subtitles because a word or phrase doesn’t come through very clearly. The score works best when it is quiet. I wasn’t very impressed with the Russian rap at the club scene.

If you love alien invasion films but find that they are starting to repeat themselves, you’re going to really like The Darkest Hour. It’s one of those sleeper films that you probably never even heard about. Now you have. Don’t miss it. There are some real cool opening titles that start in Russian and morph to English. “Is it just me or does Cyrillic look like Klingon?”

Gino Sassani is a member of the Southeastern Film Critic's Association (SEFCA). He is a film and television critic based in Tampa, Florida. He's also the Senior Editor here at Upcomingdiscs. Gino started reviewing films in the early 1990's as a segment of his local television show Focus. He's an award-winning recording artist for Omega Records. Gino is currently working on his 8th album Merchants & Mercenaries. Gino took over Upcomingdiscs Dec 1, 2008. He works out of a home theater he calls The Reel World. Favorite films: The Godfather, The Godfather Part II, The Body Snatcher (Val Lewton film with Karloff and Lugosi, not the pod people film), Unforgiven, Gladiator, The Lion King, Jaws, Son Of Frankenstein, The Good, The Bad And The Ugly, and Monsters, Inc.
Planet Egypt Think Like a Man