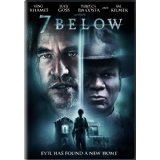 Can someone please explain to me what happened to Val Kilmer?  I can remember the days when he was an A-list celebrity and in some of the highest grossing films of the 90s.  He was the Iceman in Top Gun, Doc Holiday in Tombstone, and he even put on the cape and cowl for Batman Forever.  My point is that at one time the name Val Kilmer actually meant something to a film, but any more it seems he has disappeared into obscurity, and that bothers me.  Sure, the famous can’t rule the top forever, but Kilmer still has the acting chops and deserves a career revival; his part in Kiss Kiss Bang Bang goes down as one of my favorite P.I. roles on the big screen.  Sure people have every right to disagree with me, but I’m certain that everyone can agree he deserves better than being in 7 Below.

The film kicks off in a home in the middle of nowhere.  A mother is trying to get her children settled for bed when her foster child ends up slaughtering her and the rest of the family.  It’s not a bad start, but this is nothing the average horror fan hasn’t seen before.  The film jumps ahead a hundred years to present day where five strangers are stuffed in a shuttle bus on vacation.  Following a stop at the gas station the shuttle bus is back on the road where everything is fine till a lady in a white dress appears in the middle of the road causing the bus to swerve off the road and into a tree.   With one dead driver and a nasty storm on the way our strangers are rescued by Jack (Ving Rhames) who kindly offers to bring them home so they can use his phone and get out of the storm.  But we know something just isn’t right about Jack or the ominous storm lurking in the distance.

It’s at the house where the rest of the film unfolds.  With Bill (Val Kilmer) upstairs mending a concussion, the others begin to second guess their decision in coming to this house in the middle of nowhere.  At this point this storm of the century is supposed to be wreaking havoc in and around all the counties the house is located in, but we never see or even feel our characters are in any real danger.  Trees are supposed to be down and roads are blocked, but our characters never have to confront this threat, and it just feels unnecessary.   The threat is within the house, as it seems it is the 100th anniversary and the murders from the past are being relived, and the new houseguests are its present-day victims.

What hurts this film the most is the relationships of the characters.  It’s a low-budget horror film, so this isn’t the film where I expect the kind of character depth as you would find in The Shining, but it would be nice to at least come off somewhat believable.  The married couple Bill and Elizabeth is developed so poorly, and there is zero chemistry between the two.  Just because they are a couple in a bad marriage doesn’t mean they should act like total strangers around each other.   The film had many chances to delve into this relationship and their skeleton-filled closet, but instead it was ignored to spend time following even less interesting characters.  The character of Jack is shrouded in mystery, and even when his past gets a reveal I couldn’t care less.  Apparently the writers didn’t care enough about the depth about their characters, so why should the audience care what happens to them?

As the film plods along the body count increases, and I began to care less and less about the outcome that I had figured out much sooner than I had hoped.  By the time the film reaches its climax I couldn’t have been more relieved to know the end was nearly in sight.  I don’t want to give the impression the film was awful.  For being a low-budget indie film crammed with cliché after cliché, I still find comfort in knowing there is much worse out there.  What I don’t understand is how they managed to get Kilmer and Rhames to be in this. I understand times are tight but seriously they deserve better than this.

Brent Lorentson is a horror writer and film critic based out of Tampa, Florida. With a BA in Digital Film, he co-wrote and co-directed Scavenger Hunt. His short stories have appeared in various horror anthologies. In 2019 his short script Fertile Blood will be a part of the anthology horror film Slumber Party. He is currently working on his first novel A Dark and Secret Place set to be released in late 2019. Favorite Films: Taxi Driver, Fight Club, I Saw the Devil, The Wild Bunch, Dawn of the Dead, A Clockwork Orange, Pulp Fiction, Heathers, The Monster Squad, and High Fidelity.
Top Shot-Complete Season 3 The Raven (2012)