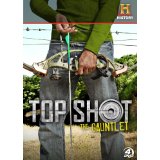 “Contestants are experienced marksmen operating on a closed course. Do not attempt this at home.”

So just in case you have access to all kinds of firearms and a few spare acres to set up a range, you might want to think twice before trying to reproduce the challenges you’ll find in History’s latest reality show Top Shot. It’s part Survivor and part Big Brother with the added dimension of marksmanship. And, honestly, it’s quite a bit more compelling than either of those shows.

Sixteen contestants were chosen for their marksmanship skills. Most of them have some claim to fame in the world of competitive shooting. They are split into two groups: the red team and the blue team. This time the teams are separated through the first competition. The losers become the red team, while the winners become the blue team. Like Big Brother, they all will share a single house where cameras will follow their everyday activities. That includes such droll behavior as brushing their teeth and sleeping in their dormitory-style beds. Each morning they are introduced to the weapon or weapons that will be a part of their next competition. The weapons range from historic firearms to slingshots and knives. They are placed with an expert in that weapon and given time to learn and drill the skill sets that will be instrumental in the upcoming challenge. Finally they compete in some combination shooting and obstacle course event. The winning team is safe from elimination. The losing team will head to something called the Nomination Range, where they will vote for the person they wish to see gone by firing a handgun at their target. The two contestants receiving the most votes will then compete in a head-to-head match, with the loser going home. There is no secret ballot here. Everyone can see who each person votes for. Eventually the two teams merge into a green team and individual competition begins.

Obviously, there are the typical reality-show elements here. There’s going to be maneuvering for votes and alliances. A few of the contestants will get on each other’s nerves to such an extent that it’s a good thing they don’t let them take the guns into the house. A couple of the blow-ups are quite dramatic. This season Jake is the loose canon to watch if it’s the drama of the crazy antics you’re looking for. He’s a kook and nobody in the house likes him. You can expect the traditional betrayals and extremely annoying personalities. The only real edge that this show has over all of the others is the competitions themselves. There’s plenty of shooting here, and what a difference that makes.

The host of the series is a Survivor contestant himself. Colby Donaldson was on one of Survivor’s early seasons. He had since turned those 15 minutes of fame into guest spots on such televisions shows as Just Shoot Me, Reba, JAG, Las Vegas and Bones. I guess it makes him somewhat of a logical choice to host this reality show. It really doesn’t matter so much here. Colby doesn’t get near the face time that Jeff Probst gets on Survivor. He merely sets up the situations. Experts take over from there, and since more time is spent on actual competition here, he is pretty much the play-by-play man. He appears a bit stiff at times. I’m not sure if he’s not sure how much to interfere or if he’s uncomfortable around the guns. He never picks up a weapon to fire a single shot. He’s not as much into stirring the pot at the elimination votes, either. I guess it makes a difference when you’ve been on the other side of those gatherings.

Perhaps the real star of this show is the high-speed photography. You really get to see the bullets as the impact on everything from exploding targets to glass jars filled with gumballs. This is the real reason why you might want to give this one a chance even if you generally dislike reality shows. Hey, I’m with you. I think reality shows are the last gasp of civilization. Unfortunately, my wife is a huge fan of Survivor. It’s her one and only “can’t miss” television series, so I’ve suffered through plenty of the episodes. I guess being a high school teacher for seven years I’d had my fill of all of the melodramatics and the he said/she said nonsense. So you can imagine I was more than a little bit worried that I would suffer here as well. It wasn’t the case. And it’s this wonderful shooting photography and shooting action that made all of the difference. The game dominates the series, not the schoolyard fighting. It’s there, to be sure. But with Top Shot you’re never very far away from breaking stuff up with some rounds of ammunition. If ever there was a guy’s reality show, this is it.

This year the show takes on a gauntlet theme. That means that many more of the challenges are going to involve some running and other physical aspects. There are far more obstacle courses to contend with. Again, you get many of the traditional kinds of hand guns and rifles. But you’ll also see 50 calibers, a Gatling gun, stone throwing, knives, hatchets, and the recurve bow.

Each episode is presented in its original broadcast ratio of 1.78:1. Finally A&E and History got it right. This is an anamorphic release. I hope this is the start of a trend for the network’s releases. Detail is where it’s at here. That high-speed photography I was telling you about reveals some cool stuff, and the release is serviceable in image quality. Black levels are a little better than fair, but most of this stuff happens out in the bright sunshine. It’s a very documentary style, so don’t expect incredible camera work here. That also means you should expect some serious inconsistency in the image quality. Most of the discs have only three episodes, so the bit rate is pretty solid.

The Dolby Digital 2.0 track delivers exactly what you are looking for and nothing more. The dialog is clear, and that’s all you’re going to get out of this minimalist presentation. There are some explosive sounds here, but they don’t really get as dynamic as all that in the sound department.

Behind The Bullet: (40:16) This is primarily a recap of the season with some extra footage.

Bonus Footage: (1:09:48) This is a three-part feature that covers a weapons rundown, anatomy of the shots, and a look back by the contestants.

The show continues to add some interesting elements and reality fans will find more of the personal drama that they crave on other reality shows. For me the whole Jake thing is exactly what used to set this show apart. He’ll get on your nerves. The personalities really drive this season more than in previous years. Me, I just like seeing stuff get ripped apart in super-slow motion. “It’s that simple.”

Gino Sassani is a member of the Southeastern Film Critic's Association (SEFCA). He is a film and television critic based in Tampa, Florida. He's also the Senior Editor here at Upcomingdiscs. Gino started reviewing films in the early 1990's as a segment of his local television show Focus. He's an award-winning recording artist for Omega Records. Gino is currently working on his 8th album Merchants & Mercenaries. Gino took over Upcomingdiscs Dec 1, 2008. He works out of a home theater he calls The Reel World. Favorite films: The Godfather, The Godfather Part II, The Body Snatcher (Val Lewton film with Karloff and Lugosi, not the pod people film), Unforgiven, Gladiator, The Lion King, Jaws, Son Of Frankenstein, The Good, The Bad And The Ugly, and Monsters, Inc.
Patton Oswalt: Finest Hour 7 Below