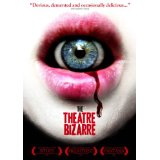 Are you a very, very big fan of horror films? If you are, you are part of a small but passionate core of fans who live to gobble up anything that is gory and creepy and disgusting. Many people enjoy a good horror film from time to time, but that is not the same thing as thinking every day about what obscure monster or murder film you haven’t seen. If you read Fangoria or any number of websites or fanzines devoted to the subject, you know what I mean. There is a worldwide group of fans who have a bloodthirsty need for more and more and more horror.

The Theatre Bizarre is an example of just the kind of thing that horror fan is looking for. It is tailored specifically to those who want their movies evil and horrible and no-holds-barred. It is made by a small do-it-yourself horror boutique that you can find out more about at severine-films.com.

It is an anthology film that allows different directors to take different approaches.

There are essentially six segments with a customary wrap-around framework segment to tie it all together. I would suggest that the signature piece is Wet Dreams, which is directed by and stars Tom Savini. Horror fans worship Tom Savini, but the average person would probably have no idea who the heck a Tom Savini is. I could go on and on about Tom, but he is a guy who has been extremely involved in the kind of films we are talking about. His highest profile roles might be in the Quentin Tarentino/Robert Rodreguiz films From Dusk Till Dawn and Planet Terror from Grindhouse, which shows the respect these two ultimate geeks have for him. I say this is a signature piece because it demonstrates all the elements that are most cherished by this audience. It is full of senseless violence and gratuitous nudity. That is actually a cheap shot, because both the nudity and violence in this segment are integral and essential. It has to do with dreams and mutilation of the most squirmy, squirrelly, and squeamish of kinds. There is no sense of restraint, which would be totally unwelcome in this instance. More importantly, it provides just the kind of primal release that the hard-core horror audience is looking for.

The wrap-around segment stars another well known face over the years especially for his early work in the Andy Warhol horror films Frankenstein and Dracula, Udo Keir. This segment is called Theatre Guignol, which refers to a famous French tradition and theater of the same name. It is meant to suggest the most cruel and medieval sensibilities. It is a tradition of twisted and dark thinking. This segment definitely fulfills all those expectations.

One of the interesting things about The Theatre Bizarre is that all the segments seem to have been conceived and executed completely independently from each other. That sense of variety actually works in its favor since many anthologies tend to get repetitive and predictable. The best segment is probably I Love You which depicts a husband who seems surprised and confused about the exact nature of his relationship with his wife. Like most of these sections, this one is full of blood, but in a somewhat more tasteful and European variety. It is an expertly acted character piece that wouldn’t have been out of place in an Ingmar Bergman film.

Another segment is called The Mother of Toads, which draws on the tradition of European horror films and classic horror literature best exemplified by H.P. Lovecraft. It is the most supernatural of all with a true and scary monster. In fact, the best thing about this collection is that it is genuinely scary. Too many films today do not take what they are doing seriously. They do not exhibit a sincere respect for something as simple as the act of scaring us. It is not a great ambition, but it is to be respected. It is clear that this collection is done with very pure intentions. Some people will look on it and think it is nothing but junk, but I get that passion and love that went into creating it. It is hardly something I would recommend to everyone, but if you are a true horror freak, then this is for you. It is also full of extras like commentaries and behind the scenes and interviews. I am not a horror freak, but I recognize their commitment and sincerity in bringing these sick and twisted tales of darkness to light.