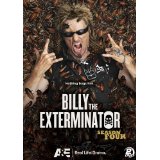 When I was a kid there was one summer when all of the radio stations were playing a song called Billy Don’t Be A Hero. Somehow I don’t think that Billy Bretherton was quite what they had in mind. Sure, Billy goes where most of us would be afraid to tread, but he’s also got to be the biggest crybaby sometimes. Hero or not, Billy and his brother Ricky have put in a fourth season of Billy The Exterminator, and it’s now available on DVD.

Billy Bretherton is the owner of Vex Con Pest Control in Shreveport, Louisiana. It’s a family-run business. Mom is the office manager and takes all of the service calls and then dispatches the technicians to their various jobs. Dad is the office mascot. He’s had a heart attack along with a few other medical scares, so he’s not really very hands-on. You might say his main job is to worry and complain. Mary is Billy’s wife. She quits halfway through the first season, appearing only a couple of brief moments in the second season. Still, she’s a part of the opening credits. Ricky is Billy’s brother and often his partner on many of his two-man jobs. It’s interesting that we’re constantly told that Ricky is deathly allergic to wasp stings. One sting and it’s an airlift ride to the ER, Billy is always reminding us. But when a wasp call comes in, who do you think Billy takes along to help? Of course, it’s Ricky. Mom always reminds us of the allergy and admonishes Billy to be sure his brother doesn’t get stung. It’s things like this that make this the most frustrating A&E series I’ve ever watched.

A&E has been one of the frontrunners in quality programming when it comes to the recent trend of reality-job-style shows. Every time I’ve gotten a new release like Ice Road Truckers or Hoarders, I roll my eyes wondering how the heck this is going to be sustainable for an entire season of shows. Most of the time I end up sucked in without ever completely understanding why. The network has just done an incredible job of keeping your interest level high on what should be routine or repetitive in nature. Once you start watching these things, you find you have a hard time stopping. I looked at the release with some hope for one of the more exciting shows to come down the A&E grapevine. I am a reptile breeder myself and have always had a huge interest in animals. This was going to be great fun…Not!

Perhaps it is my own above-average knowledge of reptiles in particular which caused me the most trouble. Billy constantly calls himself an expert. He speaks about the animals he captures and removes with complete authority. You’re inclined to accept him at his word. I don’t know much about the other animals, but Billy’s knowledge of snakes is dreadful. He continued with the erroneous information on season 4 by telling us that a gopher snake could have restricted his blood supply, implying it was a constrictor dangerous to humans. There you go again, Billy. He still won’t give up the idea that even the rattlesnakes he does encounter aren’t the instantaneous death machines he proclaims. His generalizations are simply not true and quickly disproved. This misinformation makes me highly skeptical of Billy’s knowledge on the other animals he talks about. Of course, even when his information is somewhat accurate, he hypes it beyond the limit. He hypes the diseases you can get from roaches and raccoon feces to the point that we’re staring at an epidemic of the plague before he’s done talking.

In season 4 Billy and Ricky dominate the scene more than usual. The show takes a rather fresh turn by putting the brothers on the road around the country to experience pest removal in other states. It’s a county-hopping journey around the country. Billy’s wife is finally gone from the new and improved opening credit sequence. However, the old sequence does show up on a couple of the season’s later episodes.

The journey takes them to Texas where they learn to capture gators by hand. Their trainer there has a saying: “Quick hands or no hands”. Right from the jump Billy’s talking about how this trip might get him that pirate’s hook he always wanted. Watching the boys just feeling around a water hole where they know there’s a gator has me thinking that Billy just might get his chance. Billy might have been better off hanging out with Jacob from Swamp People. At least he’d have the chance to “Shoooot”.

After Texas it’s off to places like Chicago where he chases squirrels through a home and traps a few raccoons for good measure. In Florida it’s bed bugs and pythons in the Everglades. Of course, Billy capitalizes on the big python scare here which has been blown way out of proportion. They don’t even actually go to the glades to find one. Instead they corner an obviously planted python at someone’s barbeque pit. I say obviously planted because of the perfect condition and temperament. The snake expert had to blow in its nose just to get a reaction for the camera. Yeah, I caught that sly little blow, guy.

In North Carolina it’s aggressive geese that he fends off with an umbrella. He goes to Arizona for some small hogs and snakes.

The rest of the season finds the boys back home where they help out the owners of Splash Kingdom, a water park. I’m not sure why those folks let them air this segment which shows their lazy river attraction deep in black water where quite a few bloated animal carcasses float down the canal. I’m not going anywhere near that cesspool, thank you very much.

Each episode is presented in a somewhat disappointing non-anamorphic 1.78:1 aspect ratio. It’s rare to find this kind of image presentation these days. I’m not really sure why the discs are released this way. This is all shot out in the field, so expect frantic camera work at times and documentary-style quality. Black levels are fair with some compression artifact. If you’ve seen the show on the air, you can expect pretty much a comparable image presentation here.

The Dolby Digital 2.0 track delivers exactly what you are looking for and nothing more. The dialog is clear, and that’s all you’re going to get out of this minimalist presentation. The sound design folks add in heightened hisses and sounds that are obviously not from the field. It’s another example of too much hype.

The show does look fresher this season. I think the road trip was a great idea, and it got the show out of a rut. We really don’t need to see that much of Mom or Dad. Billy and Ricky make the show work, for whatever that happens to be. You’ll get more of what you like about the show and less of what you don’t like.  Frankly, until I saw the new angle, “I was feeling a little nervous about this release”.

Gino Sassani is a member of the Southeastern Film Critic's Association (SEFCA). He is a film and television critic based in Tampa, Florida. He's also the Senior Editor here at Upcomingdiscs. Gino started reviewing films in the early 1990's as a segment of his local television show Focus. He's an award-winning recording artist for Omega Records. Gino is currently working on his 8th album Merchants & Mercenaries. Gino took over Upcomingdiscs Dec 1, 2008. He works out of a home theater he calls The Reel World. Favorite films: The Godfather, The Godfather Part II, The Body Snatcher (Val Lewton film with Karloff and Lugosi, not the pod people film), Unforgiven, Gladiator, The Lion King, Jaws, Son Of Frankenstein, The Good, The Bad And The Ugly, and Monsters, Inc.
She’s Not Our Sister The Theatre Bizarre